Warning: The following contains spoilers for what was to have been the Season 10 finale of The Walking Dead (but is now just kinda a treat to tide us over until we get our six bonus episodes). If you wanna be surprised when you watch, you don’t wanna be here.

In Robert Kirkman’s The Walking Dead comic books, “A Certain Doom” lived up to its title in a big way by killing off Andrea, whose role as Rick’s significant other wound up being taken by Michonne in the series. So we were primed to expect a major casualty during Beta’s last stand. Well, other than Beta himself, obviously. But who, if anyone, would it be, what with Andrea already long gone and Michonne having hit the road in search of Rick? Read on and find out. 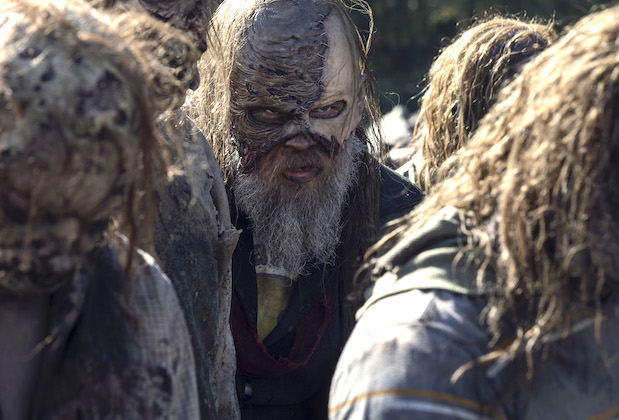 ‘YOUR JOURNEY MUST BE COMPLETED… FOR ALL OF US’ | As the episode began, chaos reigned at our heroes’ hideout. Just outside — and not for long — there were more walkers than the good guys had ever seen. When (I believe) Grace expressed to Gabriel her concerns about their chances, he reassured her that they’d be fine, thanks to the characters who were out and about and might return with reinforcements. Cut to: Daryl, Carol, Judith and Kelly rushing back and seeking refuge from the horde, Virgil turning up at Oceanside, Eugene, Yumiko, Ezekiel and Princess biking to their rendezvous with Stephanie, Aaron and Alden running afoul of some kinda crazy ninja, and Maggie reading a letter that filled her in on the Whisperers situation. Back on the road, Eugene crashed his bike and, owing to the specificity of his meeting time with Stephanie, immediately gave up hope of making it. “We are not going back,” Ezekiel insisted. “In my own moment of doubt, you did not waver, and I’m not about to let you do it now.” They owed it to themselves, and everyone they’d left behind to undertake their mission, to see it through — even if the king had to carry Eugene the whole way. Leave “tomorrow’s problems,” Yumiko suggested, “for tomorrow.”

Back at the hideout, Daryl brought Carol up to speed on Michonne’s whereabouts and wondered ruefully if he’d never see her again, like everyone else. “I’m still here,” Carol noted. Yeah, but you blew up Connie, Carol; too soon to kiss and make up. Shortly, Gabriel laid out the group’s plan: They’d lead the horde over a cliff using a sound system rigged up by Luke and affixed to a wagon. Sounds easy, right? And it might’ve been, had the wagon not been on the other side of the horde! (Who knew good post-apocalyptic parking was so hard to find?) Daryl warned that they weren’t all going to make it through. Nonetheless, if he was going out there, so was Kelly. Lydia was game, too, but if she helped, Oceanside’s Rachel and Beatrice wouldn’t. Priorities, ladies! In the weapons room — every hideout has one — Carol was interrupted while sneaking a dagger up her sleeve by Lydia, who assured her that she wasn’t pissed about the whole plot to do away with Alpha. “She was never really my mother, not in the way that matters,” Lydia said. “So thanks.” When Carol gently pushed the girl away, Lydia insisted that she wasn’t looking for a replacement mom. “That’s not what this has to be. It can be something else. So can you.” 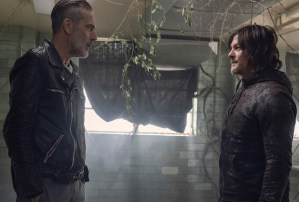 ‘WHAT IF WE’RE THE ONLY ONES?’ | Before the volunteers set out, Daryl noticed that Negan was squeaky-clean rather than bathed in walker guts. He wasn’t going, he said. “I am on the tip-top of every skin’s kill list, especially Fee Fi Fo A–hole.” So if they were trying not to draw attention, he was the wrong guy to take along. Daryl called bulls–t; if the Saviors’ former leader wanted to rebrand himself as a non-villain, he had to put his neck on the line like the rest of ’em. Ultimately, among those who entered the fray were Jerry, Magna, Jules, Luke, Carol, Kelly and Daryl, who shared an especially poignant backward glance at Judith. Side note: I know guts are super gross, but if I was going out in a horde, I’m pretty sure I’d bloody up my face, too, just in case it somehow gave me away; these cats didn’t. Also, how did they know that after letting the horde into that anteroom, they wouldn’t be stuck there? That tiny space filled up like a claustrophobic’s worst nightmare, and it wasn’t as if they could just tell the zombies, “Pardon me, coming through.”

As the group made their way through the horde, skipping the “Pardon me” part, Luke and Jules sweetly held hands, and Magna seemed to get surrounded by a group of close talkers. Well, close growlers. When Jerry gently, quietly extricated her from her predicament, Nadia Hilker did a lovely bit of subtle acting, letting the terror and relief of the moment wash across her face. Seconds later, a knife-wielding Whisperer was poised to take out (I wanna say) Daryl when he was shot from afar by an arrow and ripped to shreds by walkers. Turned out, Lydia’s role was to hang in the watchtower and point out Whisperers at whom Dianne should take aim. Realizing this, Beta gave the order to tighten the herd and move as one big, stinky mass, which left our protagonists trying to walk against the tide. Only a moment later, Daryl’s booby trap went off inside, making a hideous mess of a Whisperer and paving the way for others to ascend to the stairs.

‘DANCE YOUR WAY THROUGH THE DEAD’ | As Gabriel & Co. made plans to evacuate, Negan encouraged Lydia to get the hell outta Dodge, arguing that no matter what they did, the group would never trust either of them. He could leave, too, she pointed out. And though he insisted that he was no hero, he was about to do something bonkers and heroic. He gave Lydia her mother’s mask, then lowered himself down an elevator shaft to… well, we didn’t know just then, we could only tell that it was going to be heroic. Outside, as survivors gathered just beyond the horde, stragglers Carol and Beatrice were attacked by a Whisperer. Do I need to tell you which of them survived? No? Didn’t think so. Afterwards, Carol went to retrieve the equipment that they’d had, only to find that Lydia had put on her mother’s mask and grabbed it for them. Inside, Dog barked furiously to scare away the villains trying to break through the door. Unfortunately, they were not in the slightest deterred.

“The end… almost here,” a zombie told loco Beta as they neared the hideout’s entrance. But when The Talking Heads’ “Burning Down the House” started blaring, leading the horde away, that same zombie issued a slight correction: “Our end.” Who knew zombies could be funny? En masse, the walkers took off after the stereophonic wagon (which apparently only had one song on its playlist; coulda been worse, though — it coulda been “Easy Street”). As night fell, the Whisperers caught up with the wagon and, using walkers as formerly-human shields, managed to disable it. Scrambling for a Plan B, Daryl floated the idea of sneaking back in among the horde (hadn’t the rain washed off all of their guts by then?) and taking out the Whisperers. “Then what?” asked Magna. Lydia would lead the zombies away, she said. She would even lead them over the cliff. A true suicide mission. 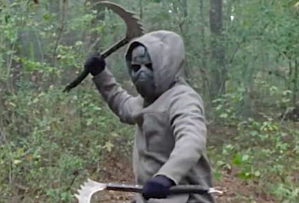 ‘THIS IS FOR ALPHA’ | As the last of the good guys evacuated the hideout, Gabriel stayed behind to ensure that the rope they were climbing down wasn’t cut. He even sent Judith off with a message in Spanish for Rosita. (Mind you, the moppet translated it as “half orange.”) Right on cue, the Whisperers broke through the barricade. It looked like it was curtains for Gabriel, then at the last second, holy freaking crap, that was cool — the ninja character that we saw earlier burst in and Ginsu’d the villains! “He’s with me,” said Maggie, coming in next. Hell of an entrance! Meanwhile, out in the field, Beta couldn’t help but overhear his people’s throats being slashed by Daryl & Co. He was just about to go after Lydia when Negan intervened. Beta, in turn, was about to avenge Alpha when Daryl intervened — plunging a pair of knives into his eyes and leaving him to euphorically surrender his flesh to the horde. “S–t, you know who that a–hole was?” asked Negan as Beta’s masked was torn away. “Yeah,” Daryl replied. “Nobody.”

The following morning, as Lydia led the horde to the cliff, she was interrupted by Carol, who said, “My choice. I finish it.” (Thankfully, the “Caryl” spinoff had already been announced, or we’d have been majorly worried.) At the last second, Lydia pulled Carol back from the edge — a dramatic tug that somehow didn’t alert the walkers to the fact that there was food about. Anyway, as the entire horde took a flying leap, Lydia and Carol wept and held one another and didn’t look at all edible to a single zombie, and at last, the girl tossed away her mother’s mask (a symbolic gesture that I’m not ashamed to admit brought tears to my eyes). Nearby, Maggie reunited with Judith, and everyone marveled at the fact that no one had died. Well, no one as important as an Andrea or a Michonne, anyway. (No offense, Beatrice, but I did have to look up your name every time you popped up.) Lydia was relieved to see that Negan hadn’t taken off, and Daryl was relieved to hear again from Carol that it was over. She hadn’t gotten the closure that she’d wanted, but “you still got me,” he pointed out before they hugged. Aww! “New Mexico’s still out there,” he added. “Maybe someday,” she replied. “We still have things to do here.”

‘IT’S OVER’ | As the episode drew to a close, we cut to a gnarly hand — a gnarly hand that was attached to Connie! She was a hot mess, bloody and covered in dirt (see also: Fear the Walking Dead’s Filfthy Woman), but she was alive, if barely. She took a few steps, then collapsed. When she opened her eyes, who should be above her on horseback but Virgil? Elsewhere, Eugene, Ezekiel, Yumiko and Princess arrived at the train station for their rendezvous with Stephanie, who… wasn’t there. So they sat around for a while looking forlorn, then Eugene decided they weren’t going home. They were going to keep trekking until they found Stephanie and her people. “Damn,” remarked Princess, “you’re one really horny dude.” Just then, floodlights came on, and a whole buncha what looked like heavily-armed stormtroopers rushed forth and ordered them to drop their weapons. And that was how “A Certain Doom” ended — no Stephanie (although it’s probably safe to assume that these were her peeps). What did you think of the fauxnale? Were you relieved or disappointed that it didn’t include a big death? Or was Beta’s demise enough? Grade it in the poll below, then hit the comments with your thoughts.