Home » TV & Movies » The Vicar of Dibley: The 5 most hilarious moments from Dawn French’s iconic sitcom

21 years ago, Geraldine Granger (played by Dawn French) arrived in the picturesque and fictional Oxfordshire village of Dibley and she soon won round a sceptical parish, presiding over births, marriages and deaths – as well as hanging out with Kylie, Sting and Johnny Depp. With the show returning to BBC One, albeit with shortened lockdown episodes, here are the greatest moments from the popular British sitcom. 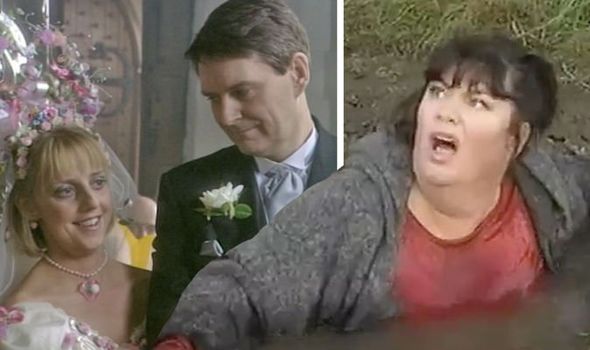 The vicar attempted to arrange a romantic liaison with Simon when he rang the house phone.

“Hi, haven’t heard from you in ages. Ever think of dropping by?” Geraldine said down the phone.

“What this Saturday? Well, obviously I will have to check my diary, just see if I’ve got any time at all.”

Alice reached for her book and started flicking through it but Geraldine grabbed it out of her hand and threw it over her shoulder.

“Yes, it seems I have got a hole available – window! Window! Window,” the naught innuendo continued.

This began with a night of passion which was constantly disturbed by several villagers.

They then went for a romantic walk which ended in the vicar’s eventual soaking – which is perhaps one of the most iconic moments from the show.

The actress who played Alice died a couple of years ago, and her character was best known for spending much of her life in a state of content confusion.

But once, she had the scent of a conspiracy and viewers saw her refuse to let it go.

“Then yesterday I went to Crookenden and I bought this other stuff, like a sort of home-brand, and I can’t believe it’s not I Can’t Believe It’s Not Butter.

“And I believe they both might be butter in a cunning disguise and, in fact, there is a lot more butter around than we thought there was,” she finished.

Geraldine replied: “You see, I don’t know what you’re talking about but I’m sure God does and is intrigued by the whole thing.”

The short sketch had audience members in tears as Emma delivers the hilarious monologue perfectly the first time.

After the death of the much-missed Letitia Cropley (Liz Smith), Geraldine took up the mantle of becoming the village’s secret Easter Bunny.

But when she slipped out early in the morning to drop off the eggs, she was in for one hell of a surprise when she bumped into David Horton (Gary Waldhorn) who was dressed in the same outfit.

“Vicar! What are you doing?” David asked and she replied: “I’m the Easter Bunny.”

“You can’t be. I’m the Easter Bunny, I promised Letitia Cropley I would do it,” he explained. “After all the time I spent on these bloody ears.”

“I must say, you look surprisingly cute in that,” the vicar remarked. “What a sexy little tail you’ve got there.”

“Get off. I suggest we stay very quiet about this. You do one end of the village, and I’ll do the other and it will remain our secret,” David ordered.

“Fair enough. Are you sure you don’t want to come back to my burrow afterwards? For a little bit of funny business?” Geraldine tempted.

But their flirting was halted by the sight of several other village residents all dressed in bunny outfits. 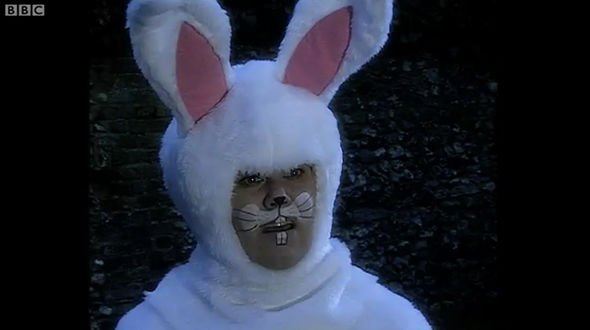 Dibley vs Darcey perform The Mirror

In a bid to raise some funds for the village, Geraldine organises a charity gala and arranges a performance from Prima ballerina Darcey Bussell.

It comes after Geraldine bumped into Darcey after leaving a radio station where she had been speaking to Terry Wogan.

Darcey offered to help the vicar and that’s when the idea of performing a ballet routine sprung to mind.

In hilarious scenes, the vicar does her best to treat the boards with grace, but the end result is the opposite.

After finding love with Hugo Horton, Alice set about planning the wedding of a century in Dibley.

And only she could dress her bridesmaids as two of the Teletubbies as she walked up the aisle.

As for her own white wedding dress, she created it herself and had Alice Loves Hugo stitched onto the front.

But whether or not the guests liked Alice’s wedding dress was the least of her worries as Jim had forgotten the rings.

Nevertheless, Geraldine was inventive and used two Hula Hoops to recreate the exchanging of the bands and vows.

Benedict Cumberbatch Once Described His 'Sherlock' Character as 'Sociopathic'

'The Andy Griffith Show': Andy Fought Hard Against Bad Jokes On the Series