Home » TV & Movies » The Chase in chaos after Bradley Walsh’s unexpected outburst ‘What did I miss?’

Bradley Walsh welcomed players Brian, Ravi, Vanessa and Shanice onto The Chase this evening, where they were up against Shaun ‘The Dark Destroyer’ Wallace in this week’s first instalment of the ITV show. Contestant Brian was knocked out early on, with the rest of the players managing to make it through to the Final Chase. However, Bradley’s hosting duties were interrupted at one point after he found a question during player Ravi’s head-to-head with Shaun particularly hilarious this evening, leaving viewers baffled.

First up was Brian, who was soon knocked out of the programme, with player Ravi up next.

Luckily, he had a better time and made it through, but things went slightly off-script during his turn.

Soon into his head-to-head with Shaun, Bradley couldn’t stop laughing after a question seemed to tickle him today.

The question asked: “The mother of the Holy Roman Emperor Charlemagne was nicknamed ‘Bertha of the big…’ what?” 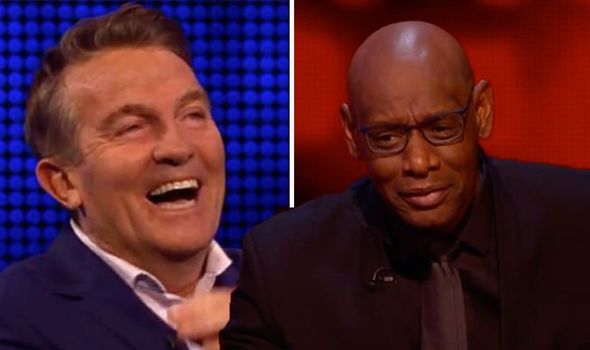 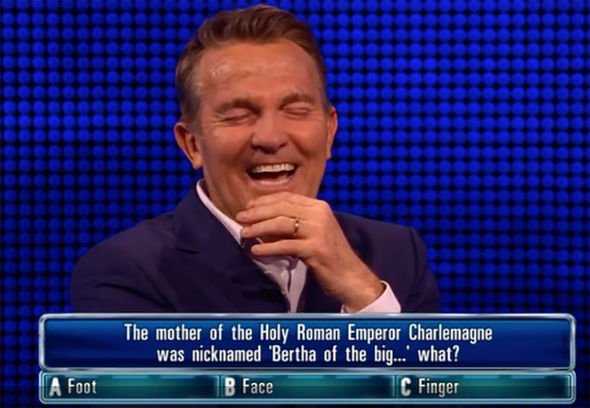 The three options were either A, foot, B, face or C, Finger – but the wording of the question, along with the options, left Bradley struggling to speak.

The host laughed, and joked: “Have a look at that finger, it’s the fattest finger you’ve ever seen! Like a saveloy.”

And when it was time for Bradley to share the contestant’s answer, this only led him to continue his outburst.

The host said to Ravi: “You put Bertha and the Big Finger. Brilliant, that’s made me laugh a lot!” 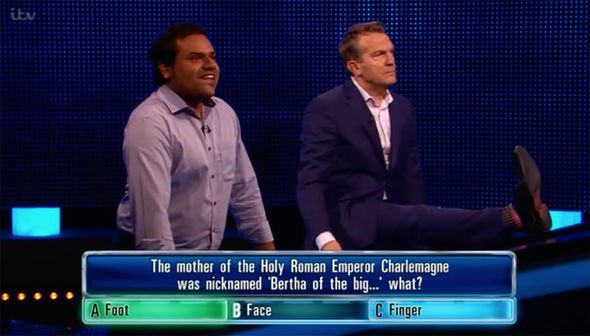 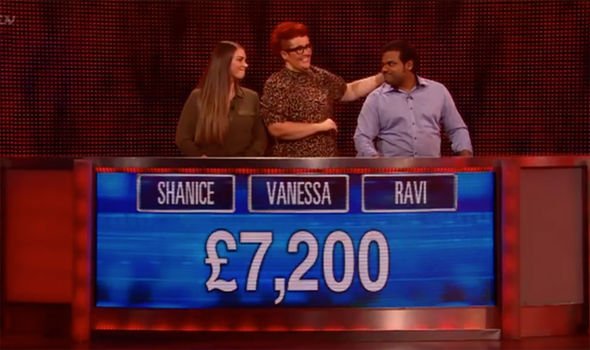 However, the joke didn’t go down so well with some of those watching at home, who questioned why the host had such a reaction.

One viewer commented on Twitter: “Calm down, it’s not that funny  #TheChase.”

Another asked: “WTH, this Charlemagne question is not that funny! What joke did I miss? #TheChase.”

“It’s not that funny #thechase,” added another, while a fourth wrote: “Bradley laughing at the Bertha stuff. I’ve seen him acting better in Dr Who #TheChase.”

It came after the contestant had taken a low offer of £200, which predictably didn’t go down well with viewers.

With Shaun having been on form today, Ravi said: “I’m rattled, I’m going to go for the low offer.”

“This guy’s really gonna take £200 back,” commented another viewer, before Ravi made it through to the final round alongside Vanessa.

Last up was Shanice, who was offered a whopping high offer this evening of £71,800, however, she decided to stick with the £4,000 from her cash builder.

After making it through to the Final Chase, Shaun commented; “Listen, they’re going to give me a hard run for my money.”

However, the trio struggled in the final quick-fire round, only managing to get 13 steps ahead of The Chaser this evening.

This meant they were soon caught and had to wave goodbye to their share of £7,200.

The Chase airs weekdays from 5pm on ITV.

Wendy Williams Is Dating a Doctor After Being Linked to Convicted Felon: 'I'm Crazy About' Him