Home » TV & Movies » The Beatles: Get Back Review: A Riveting, Playful Look at the Bands Final Days

There are plenty of times in “The Beatles: Get Back” when the band at the center is burned out. Throughout the eight-plus hours of Peter Jackson’s documentary, culled from footage gathered during the runup to their last public performance, John Lennon, Paul McCartney, George Harrison, and Ringo Starr often talk about how they haven’t slept.

It’s not just the multiple kinds of exhaustion you can sense from the four band members and the assembled crew tasked with helping them deliver a new album. There’s a kind of delirium that sets in after a long day (not to mention a long month or a long career), when the lads grab their instruments and start weaving together musical casseroles of old hits and parody lyrics and blues standards and esoteric short stories. These aren’t the jam sessions of a band killing time. They’re the last bits of creative angst from a partnership whose time was about to run out.

For all the perceived and documented strife surrounding the band’s breakup, it’s surprising to see how goofy “The Beatles: Get Back” can be at times. There are certainly moments where the cameras, courtesy of original 1969 director Michael Lindsay-Hogg, manage to pick up some watershed moments in the crumbling of the band. Members walk out mid-rehearsal. Creative discussions simmer with passive-aggressiveness.

But “The Beatles: Get Back” has far more instances of a quartet of childhood friends playing around in a confined space. If there’s tension, it’s more from simmering in a public bubble for so long, with the added bonus of now having to produce new work in a compressed timeframe. Fulfilling the deadlines for Lindsay-Hogg’s film plans, the (eventually abandoned) TV project, and a “White Album” follow-up, they try to line up their ambitions. At various points in the process, you can sense the times when they question whether that’s worth doing anymore.

Though there’s a caged-zoo feel to much of the rehearsal and recording footage, “The Beatles: Get Back” benefits from the fact that the group bounced around to different locations throughout the month of January 1969. The chromatic background at a studio in Twickenham gives way to the humble interiors of their new home at Apple Corps HQ. Even before the fabled farewell performance, there are glimpses of the daytime London streets. (For the handful of Beatles fans camped out near the Apple building, there are plenty more who walk past the front steps unfazed.) 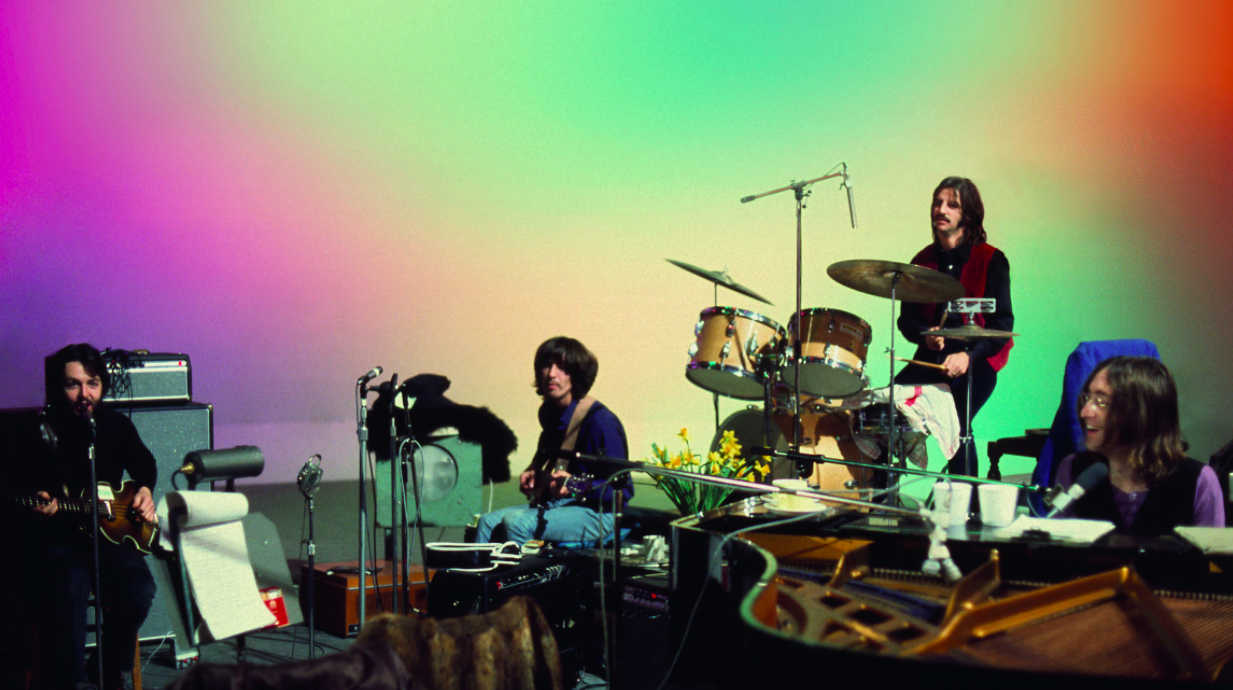 “The Beatles: Get Back”

Jackson’s structure for this footage comes back to a simple page on a calendar. As each new day passes in order, the days get crossed off and the deadline dates circled in red get closer and closer. Even with that steady march toward the last days of January, there are carefully picked moments when “The Beatles: Get Back” gets to hop around for other parts of the group’s history. When the in-studio conversation turns to their weeks at an ashram in Rishikesh the year before, Jackson drops in home movies from the trip to line up with their recollections.

The past is ever-present in “The Beatles: Get Back.” Maybe it’s a bit of selective editing from the treasure trove of existing footage, but this project gives the impression that at least McCartney and Lennon had no problem dipping into their back catalog. It’s natural for this group, who throughout the songwriting process are almost compulsively musical. Unless the four of them are seated around a table with Lindsay-Hogg or producer George Martin, someone’s usually got a guitar in hand. The project at times feels like a sound technician’s nightmare — until you get to a moment where you can hear the bones of a future Beatles anthem forming in the background of a casual conversation happening on the other side of the room.

Some of the songs that came to define these “Let It Be” sessions arrived in close-to-final form, whether they’d been workshopped at home or had been germinating for a while. The true moments of alchemy in “The Beatles: Get Back” come when you can sense the atmosphere in the room change as one of them hits on a musical idea that will one day blossom into a full-fledged classic. (Some tracks that eventually landed on “Abbey Road” or solo efforts can trace their origins to these few weeks, as well.) These three feature-length episodes are some of the purest documents of the creative process, the musical equivalent of Michelangelo discovering the sculpture that was always in the block of marble from the start.

Throughout the process, the four band members remain hyper-aware that this is all being captured for posterity. After so much time under a public microscope (this doc shows how aware they were of what was being written about them in the press), maybe the constant presence of a camera was a visual version of white noise. There are points when they insist on having conversations or doing business away from the rest of the crew, particularly as they’re trying to preserve the foursome. From Starr’s general jolliness to Lennon’s experimental cheekiness all the way through McCartney singing the final version of the album’s title track straight to camera, there’s an unspoken push-pull between who they are as individuals or musicians and who they are as The Beatles. 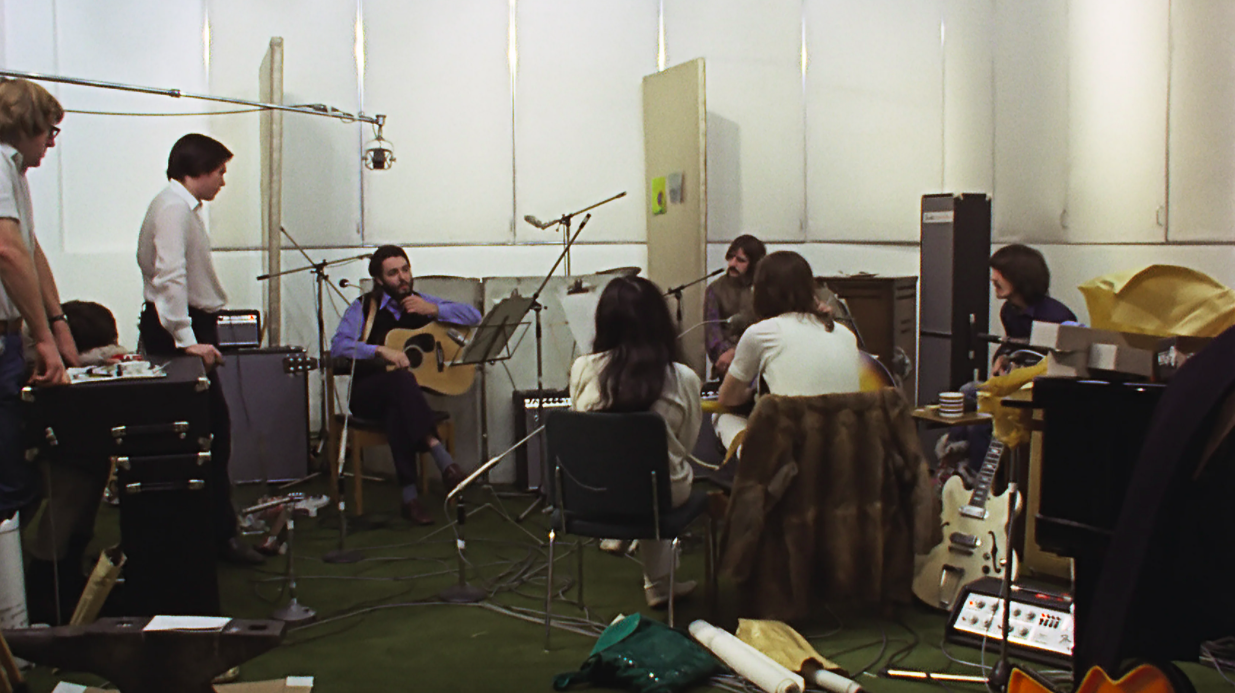 “The Beatles: Get Back”

It’s the kind of access to a group turning point that pretty much renders any biopic obsolete. Sandy Powell working for months might not be able to outdo the wardrobe that everyone was casually bringing from home every day. Lennon makes for an ideal class clown, complete with a feel for a good callback and a quiver of one-liners that wouldn’t feel out of place on “Succession.” For as much historical blame as outside forces have gotten in breaking up The Beatles, this footage manages to include Yoko Ono, Linda McCartney, and a number of other “guest stars,” while showing the band members themselves didn’t need any help sowing their own discontent.

If “The Beatles: Get Back” makes any minor slips, it’s in pursuit of being comprehensive. There’s an early frenzied nature in cutting together as many angles as possible when later moments prove the value in letting these creative breakthroughs play out more undisturbed. Though, at least part of that comes from the fact that this project makes a patchwork to cover up the parts where only the audio is available. That Jackson and chief editor Jabez Olssen are able to stitch these sequences together with as few seams as possible is a feat unto itself.

And a little bit of excess makes perfect sense for a chronicle like this, particularly as the on-screen McCartney pushes for more and more takes and refinements, right up through the documentary’s closing moments. (In each extra bit of tinkering, you can feel the bevy of remasters and remixes of the “Let It Be” album coming in the decades to follow.) “The Beatles: Get Back” is a testament to how many ideas came this close to being shelved.

Overall, Jackson’s insights are savvy, knowing which seemingly repetitive playings of songs or quibbles about performance venues will bring something new to our understanding of these men. Those instincts carry through to the climactic rooftop concert, which in “The Beatles: Get Back” becomes as much a split-screen race against time as an indelible music video. With a project like this that brings back music history from the cutting room floor to the limelight, it makes sense to have too much rather than too little.

The first episode of “The Beatles: Get Back” is now available to watch on Disney+. New episodes will be released on Friday and Saturday.

‘Terminator: Dark Fate’: Could the Sixth ‘Terminator’ Film Be the Series’ First Great Sequel Since ‘T2’?

Lucifer on Netflix: Stars Detail Pros of a Shorter Season, Cussing vs. Nudity