If you’re going to make a black comic satire, one topic you can bet will never go out of style is American power. “Veep” knew as much when it started its ruthless skewering of power-hungry politicians eight years ago, and “Succession” placed the same bet before launching last year, inching its stack of chips toward a family-run media empire.

But even its savvy team of producers, including director and executive producer Adam McKay, didn’t know just how topical it would become.

“We went to New York to do pre-production [on Season 1], and right dab in the middle of that Donald Trump got elected,” McKay told IndieWire. “We suddenly realized our clearly relevant show was now extremely relevant — with Donald Trump pushing his kids into positions of power with no real experience and kind of vague titles, this whole idea of inherited wealth and dynastic wealth, then obviously the Fox News part of it and big media — all of that stuff started ringing even more relevant than we initially thought.”

Given “Succession” tracks the failed transfer of power between a patriarchal father figure (played by Brian Cox) and his aggressive if less dynamically minded son (Jeremy Strong), the first season struck a chord with the culture — kicked off by McKay directing the very first episode.

“At first, we were all a little shell-shocked because the whole world changed when that election happened, but then there was a moment when we said ‘Thank God we get to make this show, because at least this relates to that,’” McKay said.

Fortune, if you will, struck again between the end of Season 1 and the start of Season 2. The multinational conglomerate holding company AT&T acquired Time Warner’s vast media empire, including “Succession’s” parent network HBO, and suddenly McKay’s series carries even more relevancy.

“I think it’s the strength of the show,” McKay said. “First and foremost, you have these amazing characters who are funny and vulnerable, and it’s a family drama — that’s the base of it, for sure — but the whole dynamic of [the Roy’s] business and consolidation of power and the bias in the media and monopolies vs. duopolies [is a big strength.]”

McKay said mass mergers verging on monopolies aren’t just happening in America, but around the world, and “Succession” is in a unique position to comment on that.

“My dream would be for it to get a point where you almost have to reference HBO in the show,” he said. “Of course we won’t do that, but if it gets that close to the actual reality that you almost want to see a character from the real world walk across [the screen].”

The director, who’s been watching early cuts of Season 2 episodes already, joked he also liked the idea of pushing storylines about “anti-trust laws and anti-monopoly laws” to draw even more attention to the series’ topicality. 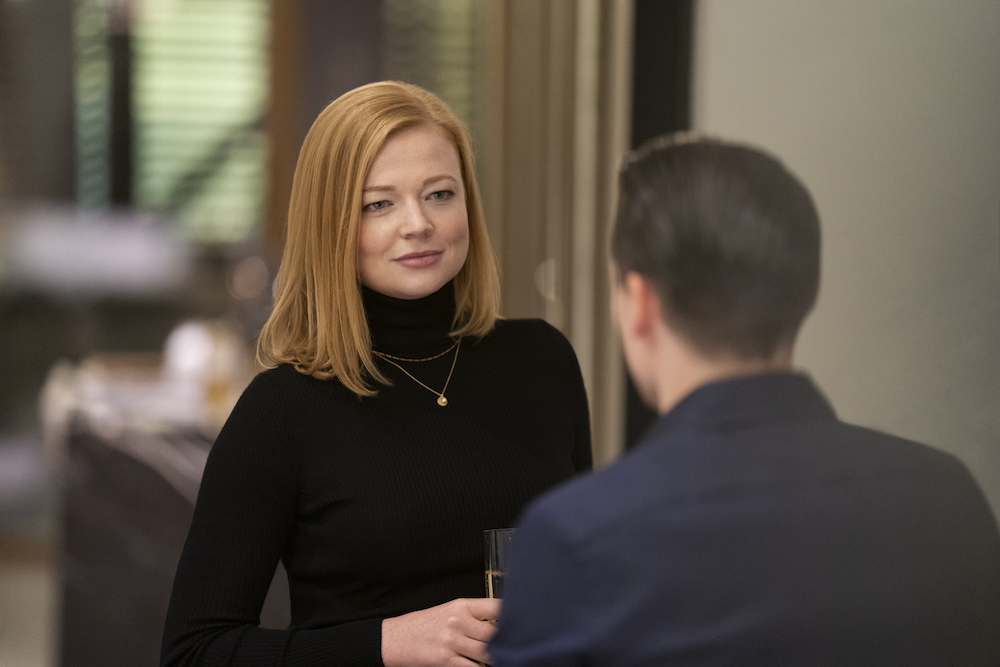 As far as Season 2 goes, the only “spoiler” McKay would share is that Matthew Mcfadyen’s Tom will continue to be uncomfortable with he and Shiv’s (Sarah Snook) open relationship.

“His uncertainty about the open relationship continues,” McKay said. “He just can’t get his head around what it means. […] Every time he sees her, you can tell he’s thinking, ‘Did she just sleep with someone?’ ‘Am I supposed to be sleeping with someone?’ ‘Is this OK?’ ‘Why do I feel crappy?’”

McKay is currently eligible for multiple awards at the 2019 Primetime Emmy Awards, including Outstanding Directing for a Drama Series (“Pilot”) and, as part of the producing team, Outstanding Drama Series. Along with watching old Neil LaBute films and “Foxcatcher” to find the premiere’s tricky tone, one of the insights he brought to set was implementing improv in key scenes, including the pilot’s big family dinner. Though McKay credits the cast and casting director Francine Maisler for a lot of it, he was excited by how well everyone gelled and played off one another.

“I think the biggest surprise was Matthew Macfadyen,” he said. “I knew he was good, I’d seen his work, I knew he could be funny, and then he was even better. Right away, that funny thing between him and Braun, where they just gravitated toward each other — every day, I’d have to make myself move on because I was laughing so hard.”

McKay spoke about his responsibilities directing the pilot episode, what he thinks about the many delicate relationships at play in the series, and where he hopes to see the series head in the future on this week’s Very Good TV Podcast. Listen to the episode below, and don’t forget to subscribe via Soundcloud or iTunes. Follow IndieWire on Twitter and Facebook for all your pertinent TV news, and check out Liz and Ben’s Twitter feeds for more, more, more. Plus, don’t forget to listen to IndieWire’s other podcasts, including Screen Talk with Eric Kohn and Anne Thompson and the Filmmaker Toolkit podcast from Chris O’Falt.

“Succession” returns to HBO in August.

Lashana Lynch Pitched an Awkward, Anxious Female 007, and the No Time to Die Team Listened