Christine Quinn may be the villain of Netflix’s Selling Sunset, but she never intended for her relationship with Chrishell Stause to turn sour. Find out why Quinn once said Stause “never liked her from the get-go.” 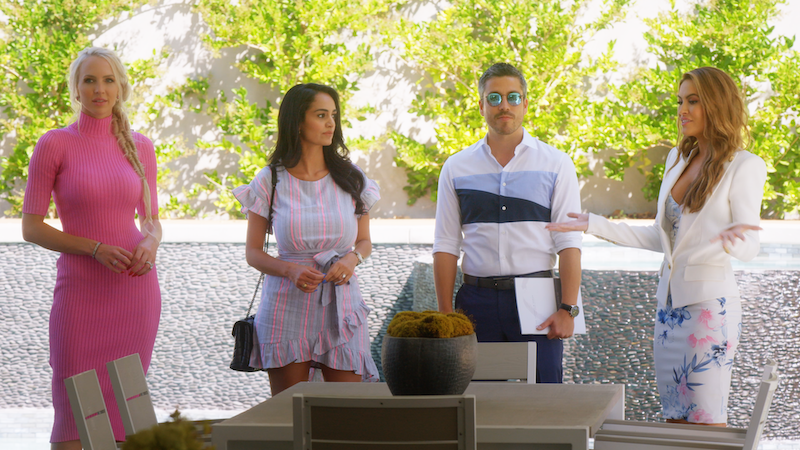 Christine Quinn and Chrishell Stause are at odds on ‘Selling Sunset’

Early on in season 1 of Selling Sunset, there was a clear divide between Quinn, the “Head B*tch In Charge,” and newcomer to The Oppenheim Group, Stause. During an interview with Nylon, Quinn revealed how a lot of her negative persona was created when the show was edited.

During a heated conversation with Stause, Quinn accused her of having dementia.

“That’s just how I talk,” Quinn justified. “I have a sense of humor. I’m not used to being on television like this.” Still, she wasn’t pleased with the way Selling Sunset portrayed her in season 1. What’s more, her relationship with Stause remained in rocky territory throughout season 2.

During her interview, Quinn also spoke about her relationship with Stause.

“To this day, she still doesn’t talk to me,” Quinn told the outlet. “When we were filming, she wouldn’t even be in the same room with me for the first couple of months.”

Allegedly during their first big scene together, the two were at a party and Stause kept running away from her.

“The producers were like, ‘Go sit down and talk with her, this needs to stop!’” Quinn said. Stause’s decision bothered producers, who Quinn said were “really irritated” with her.

Because Stause didn’t want to be around Quinn, production had to schedule the times they filmed in the office.

“It was difficult,” Quinn admitted. “She didn’t want to talk to me. It was really ridiculous.”

Christine Quinn thinks Chrishell Stause likes to ‘be the victim’

Throughout Selling Sunset‘s three seasons, Quinn and Stause’s relationship has been hot and cold.

“She likes to be the victim and really loves to get sympathy from the audience,” Quinn told Nylon. “That’s just kind of how she goes about things. I don’t go about it that way. I don’t think it was about the pool party — I think it was so much more. She never liked me from the get-go, that was just a convenient excuse.”

But when Stause went through her very public divorce from actor Justin Hartley, her relationship with Quinn took a turn for the worse.

Quinn’s feud with Stause seems to be a major storyline on Selling Sunset — and in Quinn’s eyes, that’s on purpose.

“From day one, obviously the producers had certain things in mind,” Quinn told the Brandi Glanville Unfiltered podcast, continuing:

They wanted us to clash. At first, we didn’t. We got along great. We were friends. She was at my house. We were drinking, having a good time. I was getting to know her and then the storylines came into play.

In the past, Quinn and Stause would connect with each other after filming to ensure their relationship was still OK.

“We thought that we were good at separating things,” Quinn explained. “Then we realized, ‘Oh sh*t! This is affecting our real lives.’ I never wanted to fight with her. That wasn’t me.”

Unfortunately, the world of reality television called for a feud and Quinn’s relationship with Stause fit the mold.

‘NYPD Blue’ Reboot Could Get “A Different Incarnation” At ABC

How Mindy Kaling Ended Up In A Billie Eilish Song