Ruth Negga’s radiant performance in “Passing” is almost unrecognizable from her last Oscar-nominated role. Those who only know the Scottish actress as Mildred Loving, the soft-spoken, steady heroine of 2016’s romantic drama “Loving,” are in for a delightfully rude awakening when they meet Clare Bellew, the destabilizing force whirling through director Rebecca Hall’s new film.

While Mildred was resolute and composed in the face of injustice, Clare is provocative and strong-willed, a sunny seductress determined to live life exactly on her terms. Though they live in very different worlds, Clare has a lot more in common with Negga’s hot-headed “Preacher” character Tulip than she does with Mildred — and with the charismatic Negga herself.

In an interview with IndieWire, Negga explained why she embraced her latest onscreen character. “Everything about Clare for me is a fuck-you to an establishment, any kind of establishment,” she said. “A Black woman wanting something, being fully invested in her ability to seduce anyone, her enjoyment of it, her enjoyment of flirting with danger, but also, at the same time, acknowledging that she cannot be safe.” She described Nella Larsen’s original novella, which inspired the movie, as “a fuck-you machine … but also a very human one, because everything about her is a worry to the status quo.”

Trained at the prestigious Samuel Beckett Theatre of Trinity College in Dublin, Negga is as pedigreed as actors come. She’s performed Ophelia at The National Theatre in London, and a critically-acclaimed Hamlet in Dublin that sold out its New York transfer. Next year, she’ll continue her Shakespearean tragedy tour when she takes on Lady Macbeth opposite Daniel Craig on Broadway. With the high-profile opening weekend coinciding with next year’s Oscars ceremony, Negga’s talent is poised to remain in the spotlight for quite some time.

Despite her many serious dramatic roles of late, in person Negga is playful, charming, and inquisitive, with a probing curiosity about the world at large and the role of art within it. Though she is “haunted” by her reading of the Larsen’s novella, she sees in both Clare and “Passing” a kind of carefree lightness that seems somewhat at odds with the subject matter.

An audacious directorial debut for Hall, “Passing” follows the quiet unraveling of Irene (Tessa Thompson, in her own awards-worthy turn), a well-to-do woman living in 1920s Harlem with her husband and two sons. While shopping one day in midtown, she is shocked to come across an old classmate Clare, whom she learns is passing as white, married to a white man, and — perhaps most surprisingly — appears quite happy. By a broad definition, Clare is a kind of benevolent antagonist of the story, throwing Irene into a tailspin of doubt about her own life choices and unearthing her repressed queer desire. 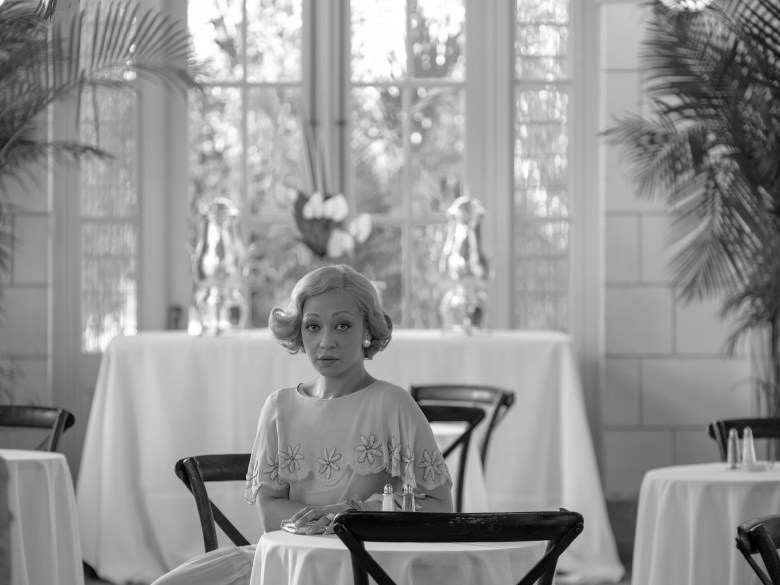 “She pulled a little snag. She pulled it! She’s responsible. She’s the firebrand, the whirlwind that comes in,” Negga said of Clare’s effect on Irene. “Everything [Irene] knew before is disrupted and nothing makes sense anymore. Her value system has been devalued in a way, and that’s a terrifying thing. …We all resist a Clare in our life, but we all need her. I don’t know if she usually comes in quite a seductive form, but she does for Irene.”

When Irene convinces herself Clare is having an affair with her husband Brian (André Holland), it’s unclear which side inspires more jealousy. The film leaves much up for interpretation, and Negga isn’t offering much clarity.

“Isn’t all friendship seduction? You know when you want someone to like you and you want to show them your best side. You want to show them the fun, sensual side. I think Clare loves that, loves Irene. I’m not entirely sure if it’s just Irene she loves or if it’s everything that Irene embodies and represents, the Black maternal figure,” she said. “We’re all seducing in different ways. Hers is just sexier than everybody else’s, I’m afraid.”

Shot in black and white in an appropriately claustrophobic 4:3 aspect ratio, the film teeters between a hyper-stylization period piece and contemporary qualities. As the larger-than-life firebrand causing Irene’s unraveling, Negga plays Clare with a tasteful undercurrent of Blanche DuBois or Carmen Jones. Shifting between a kind of slack-jawed, dead-eyed sadness and a wryly electric playfulness, Negga’s embodiment is a finely-tuned dance between full caricature and living, breathing human being.

“I didn’t want Clare to destabilize the film in terms of being this sort of Norma Desmond character, as much as I would have loved to play it like that,” she said. “But I still wanted to weave in this idea of performance, because passing is a performance.” That included the character’s distinctive speech patterns. “There’s this touch of a Southern accent in there and I was thinking, ‘Maybe I need to get rid of this,’” she said. “But then I thought, ‘Actually, she’s constructing a persona that foreshadows the kind of Southern Belle.’ That fucks with the tragic mulatto and the idea that, if she’s going to enter a life of certain performance, she’s going to have some fun doing it.”

Throughout the story, Clare slowly pushes the limits of the life she’s constructed for herself, spending more time in Harlem with her new friends and former community. The film is ripe with tension from the very first scene, when Irene finds herself unintentionally passing in the presence of a professed racist. Irene is appalled at Clare’s choices and fears for her safety, but slowly realizes that Clare is free in a way she can never be. Negga was adamant that the audience never pity Clare, and she does so by breathing life into her at every turn.

“When you pity someone, it’s a patronizing impulse, and it’s also disempowering for the object of pity. I didn’t want that,” she said. “I think femininity can be weaponized in that way. It’s kind of like a Trojan Horse, and I feel with Clare that’s very much the case.”