Rochelle Humes, who has three young children with husband singer Marvin Humes, detailed her concerns over the jab being given to kids after a heated debate on This Morning.

The singer and presenter has been stepping in to host with Eamonn Holmes on this week’s set of episodes.

But after the duo had to handle a debate over vaccinations on Tuesday instalment, it was clear Rochelle remained unsure on the issue.

The pair welcomed Dr Nighat Arif, who urged children to take the vaccination if offered and TV presenter Beverley Turner on the opposite side.

After the debate, Eamonn said: ‘Dr Arif, who believes the vaccines are safe and mass vaccination is the best way to keep our children safe and at school, and Beverley Turner there, commentator who doesn’t want her children to have the vaccine.

‘Thank you both very much for your arguments,’ the presenter concluded.

Rochelle sighed after the debate came to a close as Eamonn asked her: ‘Sold?’ 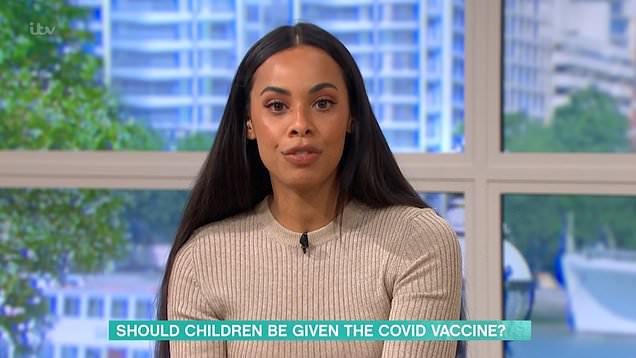 But the former The Saturdays’ singer seemed very undecided after the discussion, responding: ‘I don’t know, I don’t know.

‘Mine are younger, they don’t come in that 12-year-old bracket, but I really don’t know.’

Eamonn continued to quiz her, asking if her three young children had previously had any vaccinations, to which she confirmed they had.

Eamonn went on to remind Rochelle the arguments both women had just put forward in the previous segment.

‘The doctor would say the Pfizer vaccine or whatever has got green for go on it.’

Clearly still conflicted, she said: ‘That’s your most precious thing in the world, isn’t it, so I think…’

However, her co-star soon questioned her on what would happen if they ‘got Covid.’

Eamonn brought things to a close by asking viewers to get in touch with how they felt about the issue.

Rochelle has three young children with husband Marvin, Alaia-Mai, eight, four-year-old Valentina, and she give birth to son Blake in October 2020.

The debate came after the news children as young as 12 would be offered the vaccine upon returning to school this September.

Some children in the UK’s summer holidays have already ended, with children in Scotland having already gone back to school.

This Morning airs weekdays at 10am on ITV.