Piers Morgan, 55, was on hand to host Wednesday’s edition of Good Morning Britain and as he has been doing all week, the journalist spoke about the backlash dance troupe Diversity have received over their controversial performance. Over 23,000 viewers have complained to broadcasting watchdog Ofcom about the routine, making it the most controversial television moment of the year. ITV has since issued a statement in defence of the Britain’s Got Talent stars and the outspoken presenter gave his take on the network’s stance.

The broadcasting giant explained to viewers Britain’s Got Talent has always been an “inclusive show” and reiterated it stood by Diversity.

They stated the dance troupe and leader Ashley Banjo, 31, were “a great example of talent, creativity and diversity of modern Britain.”

Not only did the scenes depict the aftermath of the death of George Floyd at the hands of a white American police officer, but they also highlighted other big moments of the year including the coronavirus pandemic.

Piers said of the network’s defence: “I don’t think I’ve ever been prouder to work for ITV when I read that.

“I’m pleased they haven’t bowed to the mob of people protesting – good for ITV.” 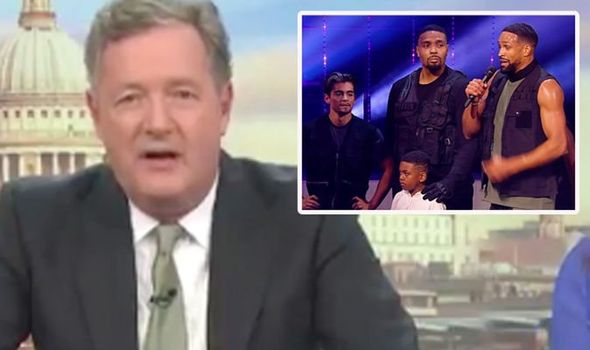 Both Piers and Susanna then said they too stood by Diversity, with the former adding: “Ashley, keep going.

“We’re all right behind you,” he continued, with viewers watching at home reiterating the presenter’s sentiments.

One wrote on Twitter: “@ITV fantastic support for #Diversity Love the support you give through various TV programmes.”

Another added: “It would be even better if the other broadcasters came out in support of the great performance #Diversity did to show a solidarity rarely seen today @BBC @Channel4 @channel5_tv.”

Who is Leilani Dowding? New Real Housewives of Cheshire star and Page 3 girl

Are Zara & Peter Phillips lobbying the British govt on behalf of a Chinese entity?