Piers Morgan, 55, and his Good Morning Britain co-host Susanna Reid, 49, were discussing the day’s headlines at the top of the show, which included a debate about the warm temperatures being felt up and down the country. Handing over the reins to Laura Tobin, 38, to inform ITV viewers about the latest forecast, the outspoken presenter wanted to find out if she classed the weather as being “hot”. When she disagreed with him, the journalist became quite irate which led the pair to talk over the top of one another to make their point.

With Laura saying the temperatures to be felt will be “warm”, Piers said of the latest heatwave: “In common sense terms it’s hot.”

The weather presenter hit back as she told the host: “I’m being meteorologically correct,” but he disagreed.

“No, you’re being a total nerd and it makes no sense,” the broadcaster remarked, to which Susanna added: “You like people being total nerds and across their subjects.”

“It’s obviously going to be boiling hot – not very warm,” he once again commented, debunking the forecaster’s report.

“What if it goes to 50 degrees celsius, then what?” the journalist asked, with the meteorologist telling him: “I would push it to very, very warm.” 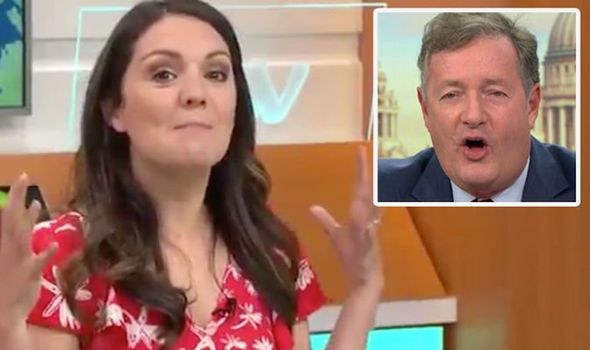 “Unseasonably warm for this time of year – how ridiculous,” Piers continued as he mocked the weather presenter.

Taking to Twitter, those at watching at home commented on the debate with one writing: “Ok. Very warm it is then. Don’t want to upset @Lauratobin1.”

Another posted of the debate between the stars of the show: “Do people still actually watch this rubbish?”

“@piersmorgan its very warm. What you are basically saying is you can just shout your new word, just calm down, it’s like a toddler! Sort it out you are starting to make Boris look cool,” a third commented.

The Handmaid’s Tale returns with more questions than answers. Thoughts?

Bradley Cooper Once Ate 6,000 Calories Daily to Prepare for This Movie Role