Has Lego been a part of your life for a long time?

I’ve followed probably the standard trajectory that everyone has with Lego: you play with it a lot as a kid, in the early teens it gets chucked in a box and put away at mum’s house. I didn’t come back to until I was a dad and you find yourself in the Lego store and your 10-year-old DNA starts twitching again and you’re back in the world. 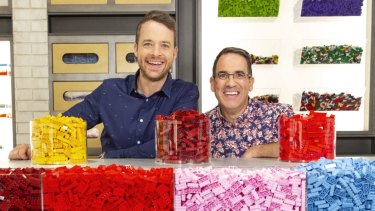 So you don’t have a Lego room at home?

I don’t. I’m right at that very standard mum and dad build level, where I get lost with the kids playing Lego, but no, don’t have a secret dungeon with five hundred thousand bricks in it where I don’t let people touch my creations.

So this show must have been quite an eye-opener to you, to see what can be done.

Well it was really fun, and that’s the thing: you don’t have to be a Lego auteur to appreciate the show, you just have to know what Lego is. So because I was in that zone of, well I know about Lego and I was obviously a big fan of the world that they’ve created without knowing too much of the detail – to then meet the contestants, who are all really funny, different creative people in their own unique way, from many different walks of life, to see what these guys and girls could create was phenomenal. I think it’s that thing of going, oh, here’s the thing that we’re all used to then to see what people who’ve taken it to its maximum potential can do with it, I found that really fun and interesting to be a part of.

And to make it clear: the contestants at no point have access to the instructions.

There are no instructions. But it’s a point worth making: I probably say it a lot on the show, it’s probably been cut out because it seems obvious, but I did feel like I had to keep saying this out loud, “I can’t believe you’re doing this without instructions”. Because that is my frame of reference for Lego. For instance episode one was OK, you guys have to build a city block, they have a metre by metre square blank piece of Lego, and it’s like, go nuts: build metres up into the air, build skyscrapers, build a world in your city block. And the stuff they created is phenomenal, and I spent the whole time going, even if there were instructions it would take most people weeks to build this.

Is it a bold move to put on a show where people are making amazing things that are not edible?

Yes, I suppose time will tell if that was a bold move or a smart move. At its heart it’s about creativity, and I think that’s something everyone can understand. I certainly found this hosting: once you give people the challenge, you can’t help but think what you would do in a similar situation. But then invariably what the teams come up with is so different to where my head went, and you get sucked into seeing whether the vision they’re taking is going to pay off or not.

How did you find developing chemistry with the Brickman (RyanMcNaught)?

Surprisingly easy. He’s a very normal, lovely, easygoing guy. And I think it’s a really simple dynamic on the show: he handles everything to do with Lego, and I kind of try and direct the traffic and run the show. And he has a terrific kind of energy: he loves the possibilities of Lego, he loves people’s creativity, he’s a massive champion of ideas. He really comes to life on the show, especially when teams come up with a great idea for a build.

So how different is it hosting a show like this where the attraction is the contestants and their builds, as opposed to other shows where you’ve been the attraction?

It’s fun, it’s a great different skillset to learn and figure out on the fly. There’s no rulebook, so you just have to figure out as you go along – “what do we feel like the tone, or the DNA of the show is?” The show is there for the contestants, one hundred per cent, and around that I just spent my time making sure they were having fun. I probably annoy them a bit, because they’re trying to build things and I’m mucking around at their desk, but I think at the end of the day we found the right balance.

What time is The Singapore Grip on ITV tonight and what's it about?

Peter Andre’s wife Emily reveals her heartbreak over sending Theo, 3, back to nursery after couple’s clash – The Sun