Spoiler alert! Do not proceed if you have not finished season 2 of Netflix’s Never Have I Ever.

Did Devi end up with Paxton Hall-Yoshida, the hottie swim jock, or Ben Gross, her academic nemesis?

Netflix’s Never Have I Ever spent a good portion of season 2 following Devi as she ping-ponged between the two boys, resulting in questionable decision-making (she secretly dates both at the same time, which doesn’t end well) and unexpected bumps in the road (new girl Aneesa spices up the love triangle, for instance). But after some serious soul-searching and a little bit of therapy, Devi chooses to accept herself and comes to the conclusion that she doesn’t need a guy — Paxton, Ben or anyone else — to have value on her own.

Television is all about that drama though and Devi gets the big surprise of her young teenage life just as she leaves the school’s winter dance. As she crosses the street, Devi gets hit by Paxton’s jeep (a callback to Paxton’s accident at the end of episode 2) and after she comes to, Paxton expresses his desires to be something more with Devi. And that means going public, and officially becoming boyfriend and girlfriend. So when they make their debut as a real couple in front of the entire school at the dance, jaws drop.

While Devi and Paxton bask in their minutes-old relationship, a stunned Ben — you can’t forget about him! — can only look on and watch. And well, it’s clear he’s still harboring unresolved feelings for Devi. It’s about to get even messier between Devi, Paxton and Ben.

“I mean, this is TV right? If she were done with Ben, Eleanor wouldn’t have said what she said, which is honestly one of my favorite parts. When Eleanor really just digs into him, like, ‘For the record, it wasn’t always him,’ I’m like, ‘Damn! Let them know, let them know!’,” Never Have I Ever star Maitreyi Ramakrishnan told ET of the finale’s last moments. “But it is going to be interesting to see what happens next. I have no idea because she is happy with Paxton and that’s happening officially. But of course, Ben’s obviously going to still be a player in the game.” 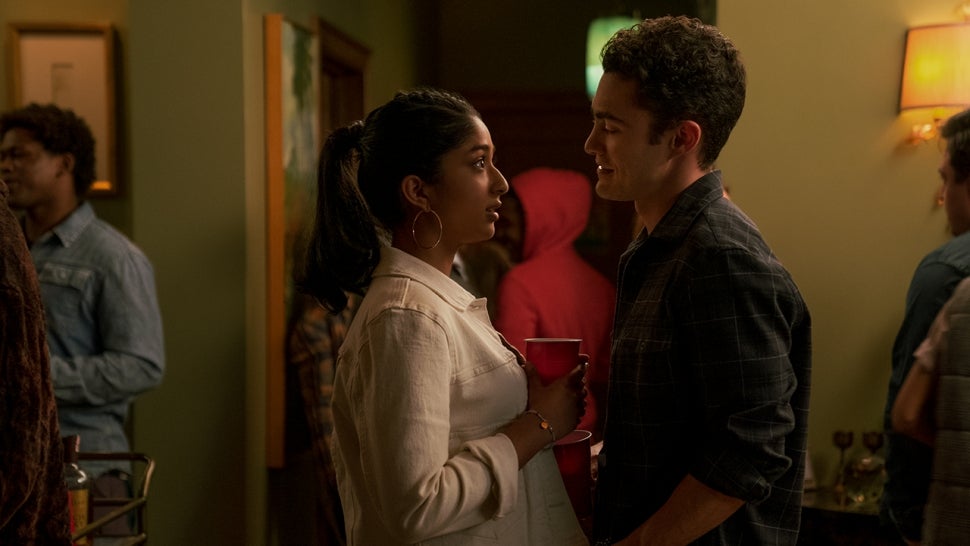 Darren Barnet, who plays Paxton, admitted he was “a little bit surprised” his character goes all-in with Devi at the school dance, considering everything that happens to them this season.

“She really did kind of mess with his heart and that’s a lot to move past so quickly, but I think with their interactions in season 2, you start to see why he really is enamored by her and why he does like her so much,” the actor told ET. “She challenges him in ways that no one else does. And the most interesting thing may be how he copes with the public opinion of him dating someone that’s not on his social status per se. You even see it in the glance when he’s looking at his friends who are gawking at the idea of them being together. So, that’s got to be a lot to do with Paxton because he is a character that does care a lot about what people think. It’s going to be interesting.”

There were a lot of conversations in the writers’ room about how to navigate the love triangle, showrunner and executive producer Lang Fisher said, sharing that the audience’s strong reception to the Team Paxton or Team Ben debate in season 1 gave them permission to “juice up” the romance this season.

“The truth is that the writers on my staff have not decided whether we are Team Ben or Team Paxton, and there’s a lot of debate. People switch sides sometimes and you just never know where we’re going to be on that. We as a writers’ room are Devi; we can argue for both sides. And I think personally, I feel most love triangles that I’ve seen, you know who you want the winner to be and everybody agrees on it. I wanted a show where people truly weren’t sure, where they’re like, ‘I don’t know, there’s arguments for both,'” Fisher told ET. “I think we’ve kind of achieved that and maybe it will bite me in the butt at the end of the series, whenever that happens, because half of the people will be like, ‘No, that’s not what I wanted!'”

Even the question of whether Devi should end up with Paxton or Ben by the end of the season was a hot topic of discussion among the writers, one that still doesn’t have a clear answer. “We definitely debated it. We’re trying to figure out what the most interesting story to tell this year is, but because you see so much growth from Paxton this season, we felt the most satisfying outcome was that he steps up and he actually has changed and has grown,” Fisher shared. “You want to see what they’d be like together and whether or not it works out, we haven’t decided. We’ll have another rousing debate about whether or not it goes well, or if a third person shows up, you never know. It could be anything.”

“And we certainly haven’t written Ben off either,” she promised. “He has this incredibly pained longing look for her at the very end. So you’re like, ‘Well, there’s still something brewing there,’ because none of us know who we want her to end up with. It’s going to be a fun, messy ride until the show ends and once again, maybe she chooses neither. They’re high schoolers. They don’t have to end up together. They should probably date a lot more people before they settle down.”

Though a third season hasn’t been picked by Netflix (yet), Ramakrishnan and Barnet have ideas on what they’d like to see for Devi and Paxton as they figure out what being an official couple means for them.

“It’ll be really cool to see Devi in a proper relationship because we technically never really have. It was a two-timing situation and as Dr. Ryan and Eleanor says, that doesn’t count, that’s not real. She has zero boyfriends. So it is going to be cool to see her as a girlfriend, that new relationship in her life that she’s never had before,” Ramakrishnan said. “But I think Paxton realizing what Devi means to him is really nice because he realizes, ‘This is the person that believes in me and doesn’t think I’m stupid. And I actually accomplished something and she was there for me.’ It’s Paxton’s setting aside the ego and the pride, and also offering forgiveness and being like, ‘This is the situation.’ It’s really heartwarming.”

“Nothing is really out of reach. What’s out of reach is what you put into your head,” Barnet acknowledged. “And Devi in season 1 would have never thought Paxton would go for her. Paxton never thought he would be interested in her. So, a book is not its cover. And I think they’re both starting to get into the chapters of each other in terms of layers as people and they intertwine more than they ever thought they would.” 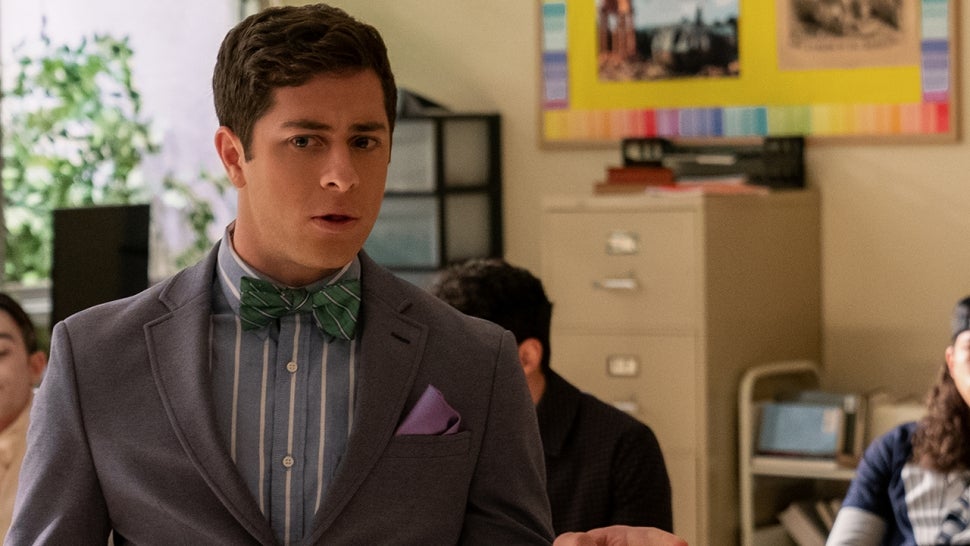 Fisher hinted that a potential third season would likely explore the challenges that come with dating a popular jock and how Devi handles her first real relationship as someone’s girlfriend.

“The biggest one is what’s Devi going to be like as an actual girlfriend in a real relationship with someone who’s much more experienced than she is?” she previewed. “This has been her dream for the entire series. Day 1 she’s like, ‘We’ve got to get boyfriends.’ That’s all she’s wanted, and now she has one and he is the most popular boy in the school. What is that going to be like? Is it going to be the dream that she had always imagined it would be or will it be more complicated? And probably it will be more complicated than that. There’s still these things to explore in terms of sex and what do you do if you’re a nerd who’s done very little and you’re dating a much more experienced guy?”

As for Ben’s place in all this, his next move — whether it be doing something about Devi or going back to Aneesa or being single for a while — is unclear at the moment. If there’s one thing, he definitely has pent-up feelings for Devi. (Ramakrishnan pointed to episode 9’s Great Gatsby mock trial in as being an eye-opener for Ben that Aneesa may not be as good of a fit for him as he thought: “It also explains how teens in high school think they know this idea of your true love, but no, you’re still figuring out what you like too.”)

“There are so many things that he’s going through in that moment [at the school dance] that even he’s not quite sure how he’s going to deal with it. I think that his feelings for Aneesa were true. At the same time, you can’t turn off those feelings for somebody that you’ve had building for years and years and years. It doesn’t work like that,” Jaren Lewison, who plays Ben, told ET. “I do think that he was hurting seeing Paxton and then Devi together. And truthfully, I don’t know how he’s going to handle it. I don’t know if he’s going to try to support that and continue his relationship with Aneesa, or if that’s just simply too much for him and he is not going to be able to give 110 percent to that relationship with Aneesa and is going to try to see how we can navigate this new relationship with Devi or what ends up happening with her and Paxton. There’s a lot of questions that need to be answered hopefully in a possible season 3. So, we’re going to have to wait and find out.”

“I think we will see them start out together and whether or not they make it, we haven’t figured out,” Fisher said of Ben and Aneesa’s rocky future. “But certainly there’s something very sweet about Ben and Aneesa. We’ve said that Aneesa’s never had a boyfriend before and Ben really seems to care about her and they have a cute chemistry that is fun there. So I wouldn’t write them off as not making it. I mean, he does seem to have some unresolved feelings for Devi, but whether or not they should be together is TBD.”

Season 2 of Never Have I Ever is streaming now on Netflix. For more, watch below.

To stay up to date on breaking TV news, sign up for ET’s daily newsletter.