The pandemic hits home for one member of NCIS.

Jimmy Palmer, the team’s medical examiner with a heart of gold and always filled with eternal optimism, suffered a devastating loss when his wife, Breena, died from COVID-19. On Tuesday’s episode, which fast-forwards the timeline to the pandemic, reveals his heart-wrenching loss to the audience when he arrives in the bullpen as his usual jovial self armed with extra disinfectant wipes for his colleagues.

Naturally, the conversation transitions into home-schooling his daughter to his mother moving in to help out around the house. But when Bishop asks a pointed question about whether his mom moving in is permanent, it’s then Jimmy mentions his wife’s devastating death from the coronavirus. “You guys were so great, when, you know… I lost Breena,” Jimmy says stoically in ET’s exclusive clip. “But between work, single parenting, school, it just got to be too much. So, I called in a lifeline.”

For actor Brian Dietzen, the NCIS writers informed him of Jimmy’s loss well before he received the script for the episode. The decision for him to be the one to have a tragic loss due to COVID came from organic conversations over the creative fuel it would provide for his story moving forward, as well as the rest of the team. “We can see within this week’s episode that Jimmy is trying to keep whatever happiness he can, trying to say, ‘Hey, my glass is half overflowing here. I’m doing really great,’ while we as the audience can see that that may not be the case,” Dietzen tells ET. “He’s doing whatever he can just keep his head above water. But there’s only so long that that can happen before there’s going to be a certain breaking point.”

Ahead of the episode, Dietzen discusses the impact the death of his wife will have on Jimmy, how the team rallies around him and whether he thought there was more story left to tell with Jimmy and Breena.

ET: Did you talk to the writers and producers beforehand? What was your initial reaction?

Brian Dietzen: I had been told that this was going to happen, that Jimmy was going to lose his wife before I received this script. I got a chance to speak with the writer, a new writer for our staff Margaret Lester. I got an opportunity to talk with her quite a bit beforehand. The producers let me know that we want the advent of COVID to hit our team. And yet, we don’t want to lose a team member. So the prospect of having Jimmy lose his wife, the most optimistic team member lose someone, came to the table and they thought it would be a great storytelling mechanic — albeit very, very sad. So they went ahead with it. I was notified ahead of time and prepared for it, I suppose, emotionally.

Were you surprised that Jimmy was the one to deal with a loss of a loved one from COVID?

Well, I think that unfortunately in our country — and across the world I should say — that’s been the case for a lot of folks who have dealt with COVID so closely. Certainly as a medical examiner, he would have dealt with the lines on his face from his N95 mask he’d worn 12, 14 hours a day dealing with bodies. And a lot of times these folks who are working closely with COVID, whether it’s a medical examiner or respiratory doctors, pulmonologists, they have lost people in their lives because of their proximity to the disease. Prior to the vaccine, there was no way to protect other people from it, aside from the prophylactic procedures of masks and gloves. I think that was one of the interesting and obviously heartbreaking things about this disease that we’ve all seen, is these people on the front line were working as doctors who are working as EMTs who have had to go through heartbreak on their own. And yet they’re asked to just continue working because if they stop working, then we don’t have our frontline there for us anymore. In many ways, this episode turned out to be a recognition of people who have lost others during this pandemic. If you wanted to get more specific about it, it’s about our frontline workers and about people who have helped us deal with this pandemic going through their own trials and continuing to show up for the rest of us. 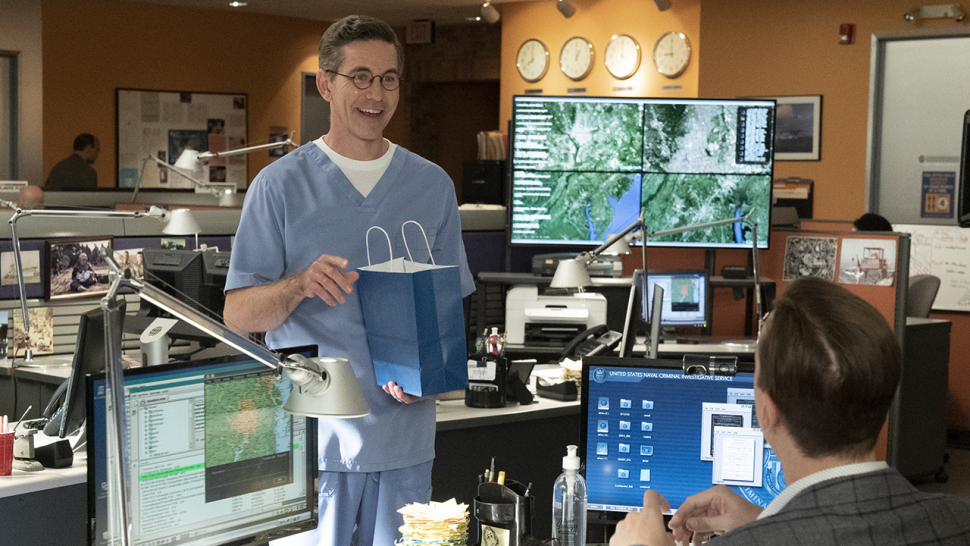 Can you talk a little bit about how Jimmy handles the loss of his wife and what we can expect to see with him in this grieving process?

Unfortunately, during this time period, a lot of folks have felt there hasn’t been time to grieve because they have more to get back to and they have to keep things moving and they have to continue on. To a larger extent, not just within the healthcare industry. When a person loses a spouse and they have a child, there is a period of time where you’re looking just to keep this ship floating. We can see within this week’s episode that Jimmy is trying to keep whatever happiness he can, trying to say, “Hey, my glass is half overflowing here. I’m doing really great,” while we as the audience can see that that may not be the case and his team certainly can see it because they know and have loved him for years. He’s doing whatever he can just keep his head above water. But there’s only so long that that can happen before there’s going to be a certain breaking point. That’s really the story that’s been told here: How does Jimmy deal with that and how does his team help him deal with that?

Is there going to be a breaking point for him at some point? What are the long-term effects of this loss?

I certainly think that it’s more of a processing than anything else. I told the writers and the producers on our show that what I really didn’t want to see with Jimmy Palmer was for him to lose his eternal optimism because of something like this. And I think that all of us were totally on the same page. They said, “Oh gosh, yeah, we need to have Jimmy be that light that’s on the team for sure.” And if there’s ever a test for that light, it’s a loss of this nature. So I think that moving forward, we’re going to definitely see Jimmy Palmer process this more. And I’ve already certainly shot other episodes where he’s had to have moments of reflection upon what’s happened. But a lot of what he’s going through and a lot of the culmination of how he’s going to deal with it, we do get to see in this week’s episode, which was a pleasure to be able to perform.

How does the team rally around him?

It’s interesting when you see the most optimistic person in your life suddenly become a victim of something that is so blindsiding and so disorienting to his worldview. I think it’s very difficult for the team to see him go through this because this is the guy who, let’s be honest, up until McGee got married and had his twins, Jimmy was the only one that had a spouse and children and that seemed like a very healthy relationship. It’s difficult to see that person go through all of this and everyone grieves differently as well. Torres certainly grieves a heck of a lot differently and so does Gibbs than would McGee or Bishop. All of them, seeing their confusion on how to try and help Jimmy, who’s going to be the best person to actually speak with him about it, is also a big part of this show. To see how this is resolved with the team and see how the team actually reaches out to help him is a huge part of Jimmy’s process. Like many great episodes of NCIS, it certainly is team-based and it was very gratifying for us to be able to do.

Is there a scene from this episode that you have a fond memory doing?

Jimmy’s coming in at the top of the show and he has this huge revelation. It almost happened offhandedly because it happened months ago, so this revelation [that his wife died] comes to light. I remember filming the scene with Wil[mer Valderrama] and Sean [Murray] and Emily [Wickersham] and there’s an awkwardness and a strangeness about this, of like, “Really? This happened?” As we’re performing, it seems strange that you’re just saying it out loud and it is a little bit of a whiplash effect. But I think that’s the objective of it, is that we’re jumping ahead in time quite a bit from the first six episodes of the season, which happened pre-COVID. Now we’re jumping forward to today and we’re saying, “Okay, here’s where we’re at. There’s a lot to catch up on. Get ready, buckle up.” I remember that was one of the first scenes we shot from this episode and it felt, “We’re already on a fast-moving train here.” It was wonderful though, because as Jimmy felt supported by his team and got what he needed with his team there for him, I felt the same way as an actor. I got my people that I’ve known and loved for more than a decade and a half, and they were all there for me to help me tell this story that I felt was really, really important.

With the show now in COVID times, what does that change the team’s approach?

It’s interesting because different shows have treated COVID differently. Some of them have said, “We’re not going to deal with this at all because we don’t want to have to deal with those storylines and whatnot.” But in the history of NCIS, when major things have happened in our country or in the world, there have been stories about it. I like the fact that we could take a portion of our season and not have to have those masks around all the time at the beginning of the season, but I felt it was a smart decision to include this major life event. We can’t pretend that it doesn’t exist. It’s going to hit the team personally and Jimmy just happened to be the one it hit the most. It was incredibly sad to film and I’ve loved working with Michelle Pierce, who plays Jimmy’s wife Breena Palmer. I’m sad she won’t be around anymore. We underused her. I thought she was a wonderful actor and a great character. But I hope that this is a nice love letter to her character and I hope people do enjoy it.

NCIS airs Tuesdays at 8 p.m. ET/PT on CBS. For more on the series, watch below.

To stay up to date on breaking TV news, sign up for ET’s daily newsletter.

‘The View’: Joy Behar Reveals the Co-Host Who Gave the Best Holiday Gift Ever