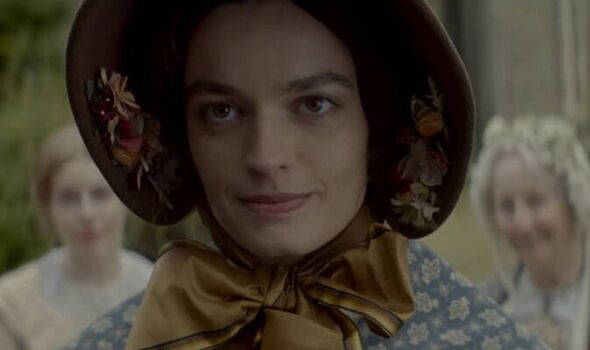 This is an Emily Bronte for the social media generation, an outsider, looked upon as “strange” in her Yorkshire moorland village of Haworth. Played with dazzling confidence by Sex Education’s Emma Mackey, this Emily would have been massive on TikTok, with her coquettish smirks, disdain for the pedestrian, and iron-clad opinions.

The writer-director admits her film is not true to the known facts but put your nagging doubts to one side and you’ll get swallowed up by two hours of cinematic intensity.

It never lets up, with the young woman’s hunger for her father’s curate Weightman (Oliver Jackson-Cohen) setting off an emotional geyser that brings forth her only novel, a work so bursting with sexual tension and ­psychological torture you can well believe something like this must have happened to inspire it. If not this, then what?

Especially well drawn is the relationship with brother Branwell (Fionn Whitehead), always a disappointment to his clergyman father (Line Of Duty’s Adrian Dunbar).

Bran takes solace in drink and opium, tempting Emily along the way. Their fallout, when Em trashes his worthless attempts at fiction, can only end in disaster.

The film starts at the end, with Emily on her deathbed aged 30, sister Charlotte telling her that her book is “base and ugly, full of selfish people who care only about ­themselves”.

What really happened out on the moors a couple of hundred years ago we will never know.

But Bronte’s influence beats through the ages, in every psycho-sexual drama and on and on as far as the vampiric Twilight movies and to the Bronte Balti in ­downtown Haworth.

O’Connor shows us, controversially and brilliantly, how this might have come about.

Wonder Woman 1984 To Debut On HBO Max Alongside Theatrical Release