The Wanted singer has been battling a stage four tumour since last year, and has undergone chemotherapy and radiotherapy.

During an appearance on Good Morning Britain, the former Strictly Come Dancing star discussed how his former bandmate is doing.

As Charlotte Hawkins and Sean Fletcher explained the news must have come as a ‘shock’ to those close to him, Max said: ‘Yeah, of course, a massive shock.

‘Honestly, he’s doing amazingly well. Tom is a different breed of animal and he’s tackling it with everything.

‘He’s doing great, he’s just set up concert at the Albert Hall as well, called Inside My Head, which is for Stand Up To Cancer. We’re really look forward to that. 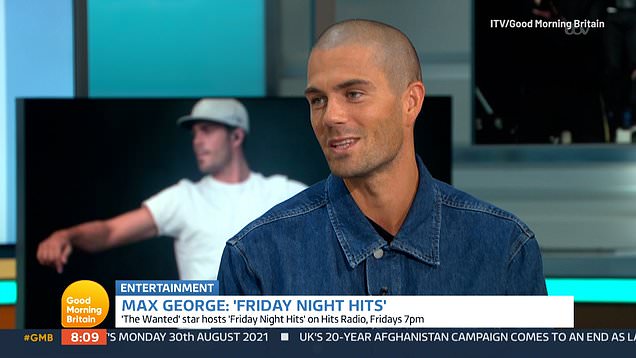 ‘He’s got some great acts on, I know Becky Hill is doing it, McFly, KSI. I’ll hopefully be front row there, watching that.’

When Charlotte praised Tom’s positivity, Max insisted: ’That’s just him, that’s the way he is with everything, and this is no different, unbelievably. It’s really not.

‘Tom just gets on with everything. I’m really looking forward to seeing him.’

The dad-of-two was diagnosed with stage four glioblastoma, an aggressive brain tumour, last September, and has since been sharing updates on his treatment on social media.

Despite the difficult side-effects he has been battling through, Tom recently revealed that he had a ‘significant reduction’ after radiotherapy and chemotherapy.

The Glad You Came star has also been putting his energy into a concert next month, to raise money and awareness for charity after his diagnosis.

‘Almost a year ago, my world was turned upside down by my diagnosis,’ he said of the project.

‘I was absolutely shocked to discover how low the percentage of the annual research budget for cancer that is devoted to brain tumour research.

‘I want to use my voice and platform to do something about it and help in any small way I can.

‘Music is my life so a concert to raise much needed funds seemed like the perfect idea. We have some amazing artists signed up and I’m really excited, it’s gonna be an amazing night.’

Good Morning Britain continues on weekdays, at 6am, on ITV.

How Did Ana de Armas and Ben Affleck Meet?

Kylie Jenner Is a Billionaire: Keeping Up with the Kardashians' Net Worths