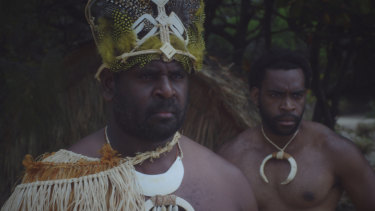 The opening scenes of Blue Water Empire are violent.Credit:

The blood-curdling cries of warriors ring out through the jungle. The hunted crouch in fear. The hunters, thirsty for their prize ­– a severed head – stalk their prey.

The opening scenes of Blue Water Empire are as violent as any depicting Scottish tribal conflict on Neil Oliver's The Rise of the Clans (Sundays, SBS). But, where many will be familiar with kilted warrior culture, the history of the Torres Strait Islands has never before been told in a documentary series.

Co-producer and narrator Aaron Fa'Aoso, who hails from the island of Saibai, is braced for controversy.

"I'm all about shock impact," says Fa'Aoso, from the set of Disney crime drama, Reef Break, on the Gold Coast. "But also the richness of the culture. I'm going to be questioned in terms of the history but I've crossed my Ts and dotted my Is, so I'm ready."

Having got his break on ABC's 2006 Torres Strait medical drama R.A.N., Fa'Aoso went on to inspire and star in Louis Nowra's The Straits and is part of the Black Comedy ensemble. It was while he was in Munich in 2013 filming German crime series Munchen 7 that the idea for Blue Water Empire struck.

"People don't know anything about the Torres Strait Islands. They think we're from the Pacific, or we're the same as our mainland Aboriginal brothers and sisters. It's important to know that there are two separate cultures that existed for the First Nations people in Australia. And it's important for wider Australia to learn of its First Nations people's history and the contribution that we've given to the nation in relation to the economic tapestry."

Some of the Torres Strait Island words are so deep and have such complex duality of meanings, English could never give the true meaning.

Directed and produced by Mystery Road's David Jowsey and Greer Simpkin and written by Steven McGregor (My Brother Vinnie), the series draws on the lifetimes of research conducted by author Anna Shnukal and historian John Singe, as well as by locals. The timeline stretches from before 1606, when the region was spotted by Spanish explorer Luis Vaes de Torres, through British colonisation, all the way to the 1992 High Court Mabo decision and finally to the 2014 Federal Court upholding of the Torres Strait Sea Claim. A cast of islanders joined Fa'Aoso and other actors including Roy Billing, Ryan Corr, Damian Walshe-Howling, Robert Mammone and Peter Phelps, to bring key events to life.

"The re-enactments had a massive emotional impact," says Fa'Aoso. "Some of the young ones hadn't known much of the history – missionaries burning down our villages and our artefacts, or some of the atrocities that have happened throughout colonisation. But there was also an acquired sense of pride."

At least four Torres Strait Island languages are spoken throughout.

"The more programs we have to showcase our language and not compromise that, the better it will be to educate wider Australia. Some of the Torres Strait Island words, such as Ngau ngoenakap kikirilinga, which translates as ‘my heart is sore’, are so deep and have such complex duality of meanings, English could never give the true meaning."

As a companion piece, Fa'Aoso made – with Blue Water Empire associate producer Jimi Bani –Yatha Pathay: Coming of Age (from Sunday, July 7 on ABC iView), a documentary about the traditional rite of passage into manhood.

"It's a story of how culture is still being preserved, and the importance of family structure – the role of maternal aunties and uncles in the raising of a man."

He hopes that this film and Blue Water Empire will go some way towards demystifying this part of Australia.

"We have an opportunity now through this medium to tell our own story our way."

‘The Magic Order’ Not Moving Forward; Netflix Series Was Based On Mark Millar Comic