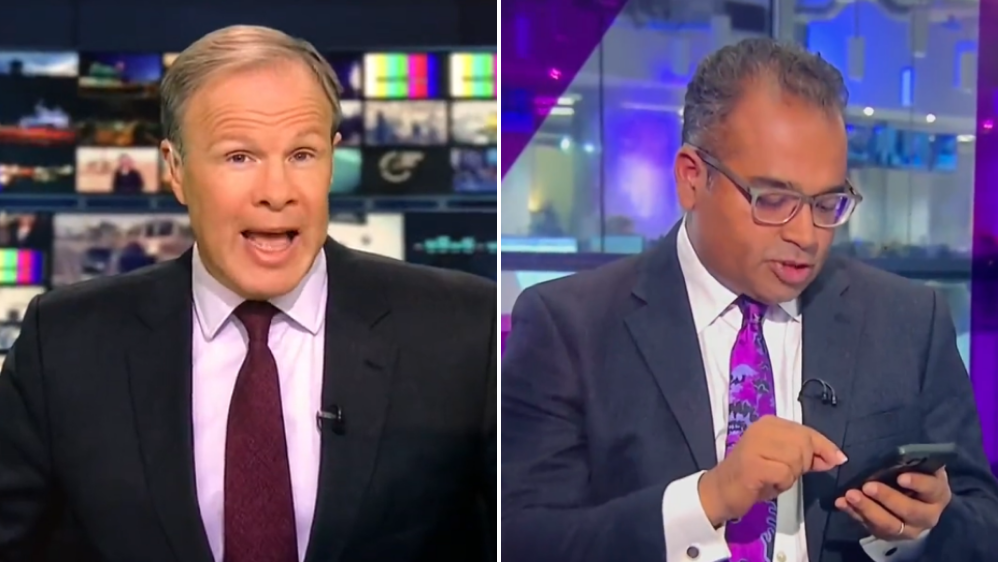 Wednesday marked an extraordinary night of television following the carnage in the House of Commons and fresh calls for Prime Minister Liz Truss to resign.

In politics, it all kicked off when Suella Braverman quit as Home Secretary after an embarrassing 43 days.

Two Tory whips were later said to have resigned from their positions amid claims of bullying as MPs voted on fracking, as Ms Truss admitted in a tumultuous Prime Minister’s Questions that she had ‘made mistakes’ and was ‘sorry’.

But television was just as much of a clusterf*ck, with C-bombs dropping all over the place and no-nonsense takes on the state of affairs. It was brilliant.

Here are all the major talking points in case you missed them, or if you want to relive the magic once more.

Krishnan Guru-Murthy was left rather red-faced after calling Steve Baker a c**t during a livestream, for which he swiftly apologised.

The Channel 4 presenter butted heads with the Northern Ireland minister over the backlash Prime Minister Liz Truss is facing from Tory rebels.

As the interview came to an end, Guru-Murthy told the MP: ‘It wasn’t a stupid question Steve, you know it, I’m very happy to go up against you on Truss, any day.’

He was then heard muttering: ‘What a c*nt.’

Guru-Murthy was quick to apologise for his remark on Twitter and said he has reached out to Baker.

‘After a robust interview with Steve Baker MP I used a very offensive word in an unguarded moment off air,’ he said.

‘While it was not broadcast that word in any context is beneath the standards I set myself and I apologise unreservedly. I have reached out to Steve Baker to say sorry.’

The MP commented: ‘I appreciate you apologising. Thank you.’

ITV News anchor Tom Bradby opened the News At 10 with a no holds barred introduction to summarise the whirlwind day of politics, describing the events as ‘abject chaos’.

‘But, we’ve just been told they have now officially un-resigned. The Home Secretary has, however, definitely gone. In short, it is total, absolute, abject chaos.’

Guru-Murthy’s C-bomb wasn’t the only one of the night, with ITV News’ political editor Robert Peston accidentally making a slip of the tongue while trying to say Jeremy Hunt’s surname.

It’s a common mistake, what with a Sky News host doing the exact same thing just this summer.

The gaffe – which is never not funny – happened when Peston spoke about the new Chancellor Mr Hunt’s planned cuts to public spending.

‘That means the hole in the public finances is bigger than it would have been, and Jeremy C*nt’s – Hunt’s – cuts will be more painful.’

Victoria Derbyshire delighted viewers over on News Night when a young Tory declared that the party is always able to ‘unite’.

Confused by this statement, an unimpressed Derbyshire sternly replied: ‘Are you joking?’

‘Where are you seeing the party come together to unite,’ she probed, to which the man referenced the Prime Minister’s apology.

Usurpingly, that answer didn’t cut it, with Derbyshire pointing out that the apology has made no difference.