Who’s new to the Succession “family”? Which La Brea episode is especially “crazy”? Which Rookie cop is getting some kin? Read on for answers to those questions plus teases from other shows. (Email any brand-new Qs to [email protected].)

What can you tell us about Succession Season 3 and any new characters? — Ana
Season 3 will introduce us to plenty of new, non-Roy faces: We already met high-powered lawyer Lisa Arthur (played by Sanaa Lathan), and she’ll play a key role in Kendall’s legal battle against his father. This week’s Episode 2 ushers in Sandy Furness’ daughter Sandi (played by Hope Davis), who acts as a messenger for her father’s wishes… and may have some wishes of her own. In Episode 4, Adrien Brody debuts as billionaire shareholder Josh Aaronson, who orchestrates a “peace summit” between Kendall and Logan, and Episode 7, we meet Alexander Skarsgård’s Lukas Matsson,a  tech genius who strikes a pivotal deal with one of the Roy kids.

Any info on Amaro’s return to SVU for the 500th ep? –Kristine
While we can’t say much (more) about the Benson-centric milestone hour, we can tell you that Amaro’s visit isn’t all cupcakes and rainbows — particularly in a tense scene between Nick and one squad member. “Amaro is never afraid of punching up,” Danny Pino tells TVLine. “He was never scared of speaking truth to power.” And you might be able to guess how that bluntness might be perceived after such a long time away from the precinct… 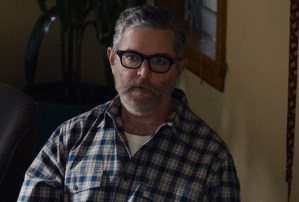 Anything on Dr. Bloom’s New Amsterdam storyline? –Dollaya
She will soon be treating a patient who will look very familiar to TV fans: Psych and Galavant alum/recurring This Is Us player Timothy Omundson will guest-star in Episode 6 as a stroke survivor and  caretaker to a man with Parkinson’s (played by Broadway vet John Christopher Jones). “We wrote a storyline just for those actors to be together, and we wrote the parts for them to highlight more actors with disabilities, more people with disabilities, and to show that just because you suffered a stroke or you’re living with Parkinson’s doesn’t mean you can’t make people fall off their chairs with laughter,” showrunner David Schulner says.

Hi! Will there be more episodes of Mad About You? I really enjoyed the new season. –Javiera
No, the sitcom’s winter 2019 Spectrum revival was always conceived as a limited event reunion. 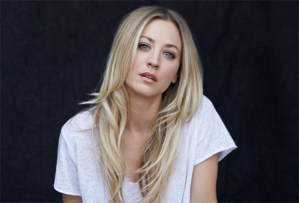 Did I see that Kaley Cuoco will be on Curb Your Enthusiasm? –Steven
Her Insta tells no lies! The Curb superfan will pop up during Season 11 as the optometrist girlfriend of Vince Vaughn’s Freddy Funkhouser. Larry is her patient and, well — spoiler alert! — a “disagreement” arises between the two.

From what I read online, La Brea got only a 6-episode order from NBC. Is the season (and possibly the series) already over in November? –J.J.
Not to cast side-eye at your Search history, J.J., but I can assure you that Season 1 is due to run 10 episodes. In fact, here is Natalie Zea teasing an episode number higher than six! “Episode 7 is pret-ty cra-zy,” Eve’s portrayer told me. “It was pretty crazy to shoot, and I’m hoping that translates. I haven’t seen it yet, but shooting Episode 7 was a first for me — and I’ll leave it at that!”

Anything interesting coming up for S.W.A.T.‘s Street? –Dalton
Street will face some big personal drama in this Friday’s episode. 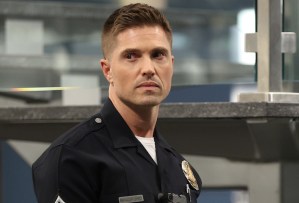 Any scoop about The Rookie‘s Tim Bradford? Will we ever meet his family? – Fifi
As a matter of fact, “we will meet Tim’s sister, later into the season,” showrunner Alexi Hawley told me. “That will shed some light on him in an interesting way….”

Is SEAL Team totally moving to Paramount+, and is it being taken off CBS? –Tina
Correct, and I included this since many people still seem unclear. Following this season’s fourth episode, airing Oct. 31 on CBS, the rest of Season 5 will only be on Paramount+, streaming new episodes every Sunday.

The Stargirl season finale is less than two weeks away. Anything to share? –Scott
Meg DeLacy, who plays Cindy/Shiv, told me to expect “a major takedown,” though “Eclipso is really going to succeed in a lot of ways” with his endgame. Meaning, it may need to be all hands on deck! “A lot of people that we’ve never seen work together before will have to join forces,” DeLacy hinted. 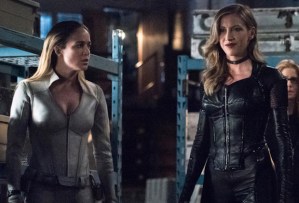 Is there any chance that Katie Cassidy (Laurel Lance/Black Canary) will make an appearance on The Flash, Legends of Tomorrow, Superman & Lois or Batwoman this season? –Alexander
Legends would be the most logical cameo, and “I am always pitching that. I would love to have Katie back,” Caity Lotz tells TVLine. “I miss my friend. I’m hoping the writers have time or want to do some Lance family storylines, because I think fans would love to get a bit of that Arrow universe reprisal and have Paul Blackthorne on the show. Like, my dad doesn’t even know I’m married! We’ve got to fill him in! … And then Sara’s mom, does she exist or not [after ‘Crisis on Infinite Earths’]?”

Please tell me Rufus survived the nuclear blast on Fear the Walking Dead. — Jean
Can’t say yes or no but will say that you’ll find out one way or the other in Sunday’s Morgan-and-Grace-centric “Six Hours.” As an added bonus, the episode tees up what our resident Dead-head Charlie Mason suggests may just be a first for the franchise.

At the beginning of Dynasty, Sammy Joe is Cristal’s nephew, and towards the end of this past season, Sammy Joe sleeps with Cristal’s brother. So in other words, he slept with his uncle. Did I miss something? –Mahomed
I had our resident Dynasty expert, Andy Swift (aka one of the 240,000 viewers), explain this to me (slowly) via Slack, and it read a lot like this: “Sammy Jo is Cristal Flores’ nephew. When they killed her and brought in the new Cristal in Season 2, she was Cristal Jennings. So this Cristal’s brother wouldn’t be related to Sammy Jo.” (My response to Andy: “LOLOLOLOLZ.”)

If you want the Inside Line on a favorite show, email [email protected]! Questions left in Comments will not be read and may very well count against your final score. (With additional reporting by Kim Roots, Dave Nemetz and Vlada Gelman)

Why was Call of the Wildman canceled?

Why The Good Place is ending after season 4