Royalty is crowned in Wednesday’s episode of High School Musical: The Musical: The Series, which at last reveals the cast of Camp Shallow Lake’s production of Frozen.

Despite Carlos’ best efforts (“We have cameras in the stage manager’s office, but nice try recasting the show!”), the parts are announced atop Episode 3, eliciting mixed emotions from the campers.

TVLine spoke with series creator Tim Federle about the casting for this season’s show-within-a-show, but before we dive too deep, take a minute to peruse the cast list in full below: 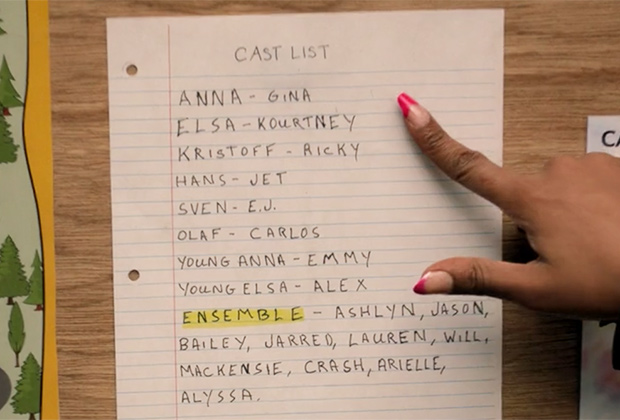 No disrespect to the boys, but a good production of Frozen comes down to the casting of its two leading ladies, and Federle just happened to have the perfect pair in mind.

“I felt really strongly that [Dara Reneé] as Elsa would be so powerful,” Federle tells TVLine. “And then to have [Sofia Wylie] as Anna — because Sofia’s so funny, and a lot of people don’t always get to see that side of her — would be a really beautiful combination.”

Their casting also fits in perfectly with the theme of this season: sisterhood.

‘While I feel that romantic love is something that’s at the center of a lot of shows, I also think not enough is said about camaraderie and sisterhood among young women, who the media often tries to pit against each other,” Federle says. “Frozen was chosen for those themes, plus the music’s incredible. It was fun to stretch outside of our High School Musical universe.”

Did the Frozen cast list shake out the way you expected? Drop a comment with your thoughts below.