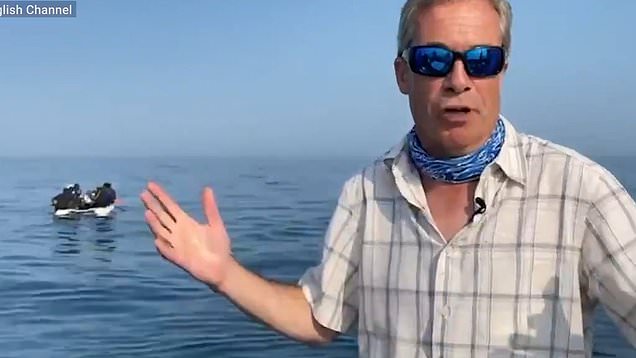 GB News has been slated by viewers after Nigel Farage said migrants crossing the English Channel had a ‘lovely day’ and if the weather changed ‘that would be the end’ of them.

The former UKIP leader, who made his debut on the broadcaster earlier this week, will be reporting on the humanitarian crisis tonight.

Ahead of his programme, GB News posted a video of Mr Farage discussing the scenes at hand, in which he accused the migrants of stealing the boat they were on.

‘This boat hasn’t even got an engine, it’s probably been stolen, they haven’t paid traffickers, they’re coming on their own,’ he said.

‘They’ve got a lovely day. If the weather was to puff up, that would be the end of that lot.’ 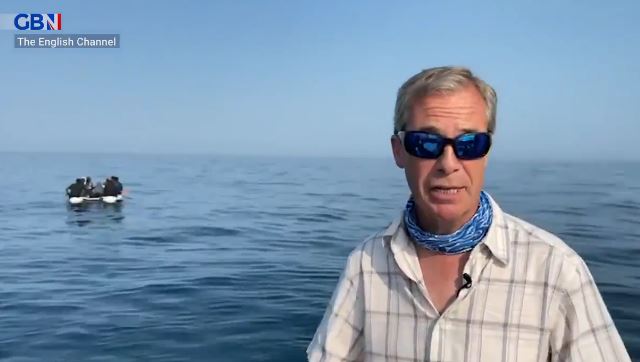 He added: ‘And that’s what’s going on every day on the Channel, I’ll be talking about this tonight at seven o’clock on GB News.’

The clip generated a strong response from viewers, with many calling out GB News and condemning them for filming the ‘potentially perilous’ scenes, on top of slamming Mr Farage’s commentary.

‘This is so vile,’ one wrote, as another penned: ‘I’m not sure even Fox News would go this low.’

‘I know you don’t expect much from this so-called “news” channel but this is disgustingly low even for them,’ a third said, with a fourth adding Mr Farage has ‘absolutely no shame’.

I know you don’t expect much from this so called “news” channel but this is disgustingly low even for them. https://t.co/OyRsdEwTWr

Imagine filming next to a dinghy full of refugees in a potentially perilous situation and, instead of having any concerns for their safety, you casually say that if the weather changes âthat will be the end of that lotâ – gross https://t.co/Z3ufatFc5K

Which decent people would ever want to associate themselves with this god awful channel? Just @SimonMcCoyTV @colinbrazierGBN people who just a couple of months ago had the respect of most the country, now this is where theyâve placed themselves ð https://t.co/4NW5hkZsLV

I’m not sure even Fox News would go this low. https://t.co/h3MWvoA3gl

this is so vile https://t.co/rOP0RGOIDI

Earlier this week, it was reported that a record 430 migrants arrived in the UK in one day.

More than 8,000 migrants have crossed so far this year, with Monday’s record surpassing the previous daily high of 416 set in September 2020.

People are still risking their lives to cross the 21-mile Dover Strait, despite Home Secretary Priti Patel’s vow to make the route ‘unviable’.

In Dungeness in Kent, around 50 people were seen landing on a beach in a single dinghy.

Some raised their hands in celebration as they walked up the beach, while others sat down on the shingle shoreline in the sun.

What Is Jessica Brown Findlay's Net Worth and What Is She Known For?