Home » TV & Movies » For All Mankind Season 2 release date and cast latest: When is it coming out?

Sci-fi fans are looking forward to For All Mankind Season 2 on Apple TV+ after Season 1 ended in December 2019.

For All Mankind debuted on Apple TV+ in November 2019 and was among the first batch of shows added to the streaming platform when it launched.

It follows an alternative history timeline in which the Russians were the first to land a man on the Moon during the 1960s space race, leaving the U.S.  struggling to catch up.

The Season 1 finale, titled A City Upon A Hill, ended with the rescue of Apollo 24. The spacecraft is captured into lunar orbit after it went off course. Ellen (Jodi Balfour) survives, but Deke (Chris Bauer) dies during the successful rescue mission.

Since Season 1 ended, fans have been wondering when For All Mankind Season 2 will come out on Apple TV+.

To answer your questions, here is everything we know about For All Mankind Season 2, including release date, cast updates, and plot.

This article provides everything that is known about For All Mankind Season 2 and all related news. As such, this article will be updated over time with news, rumors, and analysis. Meanwhile, let’s dig down into what is known so far.

Is there going to be a Season 2 of For All Mankind?

The good news is that there is going to be a Season 2 of For All Mankind.

Apple TV+ announced the renewal of the series for Season 2 in October 2019, before Season 1 premiered on the streaming platform in November.

For All Mankind was one of the first original series on Apple TV+ to score an early renewal. Others include See, Little America, Dickinson, and Home Before Dark.

Release date latest: When is For All Mankind Season 2 likely to come out?

Apple has not officially confirmed the release date for the upcoming season.

Production on For All Mankind Season 2 started in December 2019. 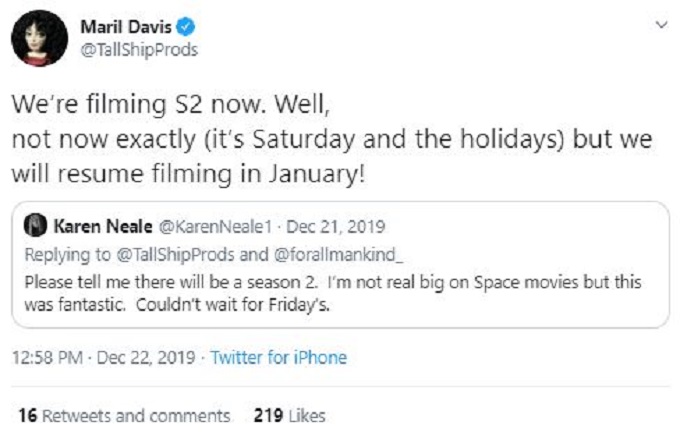 However, filming shut down in March after the coronavirus pandemic started, leaving only two episodes to shoot.

Production on the remaining two episodes resumed on August 17, 2020, according to Deadline.

Season 1 of the series premiered in November 2019.

With production on the upcoming season having resumed in August, there are hopes the new season will also premiere in November 2020.

But we will have to wait for an official confirmation from Apple TV+ about the exact premiere date of Season 2.

We will keep you updated on the latest release date news on the upcoming season, so stay tuned.

For All Mankind Season 2 trailer

Apple TV+ released a teaser trailer for the upcoming season on July 25, 2020.

For All Mankind Season 2 cast updates

Apple TV+ has not made any official statement about the cast for the upcoming season.

Based on the Season 1 finale and the teaser trailer, fans can expect Joel Kinnaman to reprise his role as Edward Baldwin.

Other cast members likely to reprise their roles in For All Mankind Season 2 include Krys Marshall as Danielle Poole, Olivia Trujillo as Aleida Rosales, Sonya Walger as Molly Cobb, Nate Corddry as Larry Wilson, Arturo del Puerto as Octavio Rosales, and Wallace Langham as Harold Weisner.

The series was created and written by Ronald D. Moore, Matt Wolpert, and Ben Nedivi.

What is For All Mankind About?

For All Mankind is set in an alternate history timeline during the space race of the ’60s and ’70s. The Soviet Union gained the upper hand by being the first to place a man on the Moon.

NASA then rises to the challenge of catching up with and beating the Russians.

For All Mankind Season 2 plot

Apple TV+ has not revealed much about what to expect of Season 2, but showrunners Moore and Wolpert teased in a chat with IGN that Season 2 will pick up where Season 1 left off.

This includes the sacrifices the astronauts have to make for the bigger goals of the U.S. space program.

After the Season 1 finale, the post-credits scene suggests there might be a time jump from the early 1970s to 1983.

The scene shows Ed and Karen watching live coverage of the sea launch of a rocket based on NASA’s 1962 Sea Dragon design that was never built.

The teaser clip also hints that fans can expect more action in Season 2 as the space race heats up in the Reagen era.

Moore confirmed that Season 2 would focus on the space race in the era of the Cold War. He revealed that the confrontation between the U.S. and the USSR would escalate under President Ronald Reagan:

“The Cold War aspect of the series comes front and center in Season 2. The space race between the Soviet Union and the United States has heated up and now there’s… not just a peaceful civilian race, there’s a military race as well…

In Season 2, there’s an overt threat and there’s overt competition … the action quotient of the show goes up significantly.”

For All Mankind Season 1 is streaming on Apple TV+

'Star Wars: The Rise of Skywalker': Fans are Outraged Over The Death of this Minor Legacy Character