Home » Escape to the Country: Jules Hudson hits back at order to speed up search ‘Let’s not rush’

Escape to the Country: Jules says buyers have ‘come a long way’

Jules Hudson was in Derbyshire for today’s episode of Escape to the Country and he was helping a recently married couple make the epic location shift from the Blue Mountains in Australia to the Peak District. Garry and Sarah – who was originally from Bedfordshire – had a budget of £750,000 to find their forever home and Jules had to find a property suitable for their three pet huskies, which meant a “big back yard” was necessary. The potential buyers were also looking for a character property that offered two reception rooms and a minimum of four bedrooms, in an area with amenities. During one house tour, Garry was keen to see “more” and encouraged Jules to get on with showing them around.

The first property Jules took Garry and Sarah to was in the village of Longford and despite them requesting “character”, it was a modern new-build.

“I like the big windows,” Sarah commented on the first approach and Garry added: “It’s a good start.”

“I know when we were coming up you said you wanted character, I do think this is one that has managed to bridge that divide between brand new and also having lots of character,” Jules explained.

The tour started in the kitchen and it boasted an open plan living space: “This is something you would see down in Australia,” Garry commented.

Next up was the living room which had extremely high ceilings and a bank of windows at one end of the room.

There was a dining room with double doors which opened out to the back garden, a utility room that provided internal access to the garage which was currently being used as a home gym.

Upstairs, there were four bedrooms and the master was a suite, with a separate bathroom and walk-in wardrobe and views which overlooked the countryside. 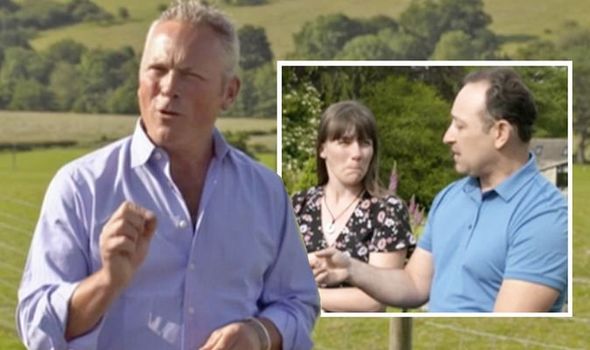 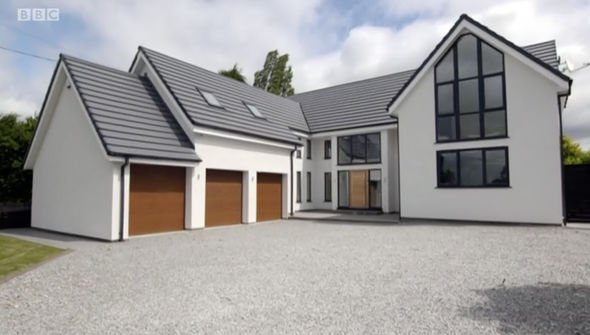 Garry kept saying “I love it” and when Jules showed them the bathroom, he said: “You’re slightly lost for words!”

As for how much the house was worth, Jules revealed it was on the market, bang on budget for £750,000.

“Those smilies continuing, despite the price!” The presenter said. “Go and explore it, at your leisure…why not.” He then turned to the camera and added: “After all, they have come a very long way to look at these properties, so, perhaps we shouldn’t rush it.”

For the next house, Jules took the couple over the border to Staffordshire and the village of Wootton.

“You don’t get all of it, you get half of it,” Jules explained. “We are going for something much more in the mode of old and characterful, what do you think?”

Sarah replied: “I think this is maybe more what we had in mind originally, of something much older. It’s picturesque.” 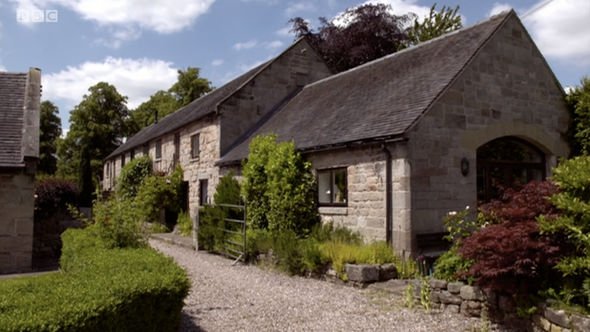 “The thought of living in a stone house has always appealed to me,” Garry added.

“Originally a barn, the bones of the semi-detached dwelling dated back to 1780, but in line with it’s Grade II listing, it was sympathetically renovated in 2006,” Jules told those watching at home.

Heading inside, and he continued: “I guarantee you were not expecting to see this.”

It was one big room, with a vaulted ceiling and in it was the formal dining area and an intimate living room.

The kitchen, however, had a “contemporary twist” and Garry “wasn’t expecting to see” it.

Off the kitchen was the second reception room which was “far cosier” and offered original beams above the windows and the staircase which led up to the second floor. 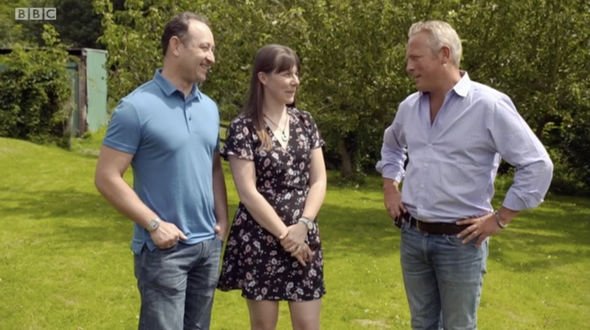 “That’s downstairs pretty much taken care of,” the presenter said and Garry jumped in: “More please!”

As for what was on offer upstairs, the period features continued with exposed beams and deep windows in all four bedrooms.

Outside there was a double garage for storage and an old goat shed that could be converted into an annexe for guests or even holiday lets.

There was also a large patio and expansive lawn area.

As for the price of the property, Jules revealed it was on the market for £575,000 – considerably lower than their budget.

The Mystery House was up next and it was in located back in Derbyshire, in the hamlet of Harper Hill. 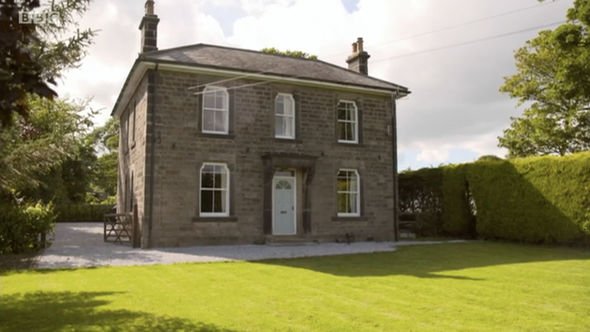 “It’s an impressive looking house,” Sarah said and Garry exclaimed: “I’ve got my manor house – I’ve got my dry stone walls! I can’t wait to look inside.”

Built-in the 1840s, it was a double-fronted, early Victorian stone property that had been “completely renovated” inside.

On the first floor was a large family bathroom and four double bedrooms, all “packed with character and featuring sash windows and original fireplaces”.

As for the main bedroom, there was a shower en-suite and had views that looked out over the back garden.

Jules told those watching at home that “the mystery revealed itself outside in the grounds with no less than two acres to play with”.

There was a formal garden to the rear and a paddock that extended beyond.

When Sarah and Garry rejoined Jules to discuss what happens next, they revealed the first and final properties were their favourites and they said they would like to revisit both properties and negotiate prices.

Escape to the Country airs weekdays at 3pm on BBC One.