The upcoming thriller movie, which is inspired by the true story of a black bear eating a bag full of cocaine after a drug runner’s plane crash in 1985, is starred by Keri Russell and Margo Martindale.

AceShowbiz –Elizabeth Banks‘ movie “Cocaine Bear” will be released in 2023. The 48-year-old actress-turned-director’s upcoming thriller, which is inspired by the true story of a drug runner’s plane crash in 1985 which led to a black bear eating a bag full of cocaine, is set to hit the big screen with a cast featuring the likes of Keri Russell and Margo Martindale.

Universal has confirmed the film, which also stars Ray Liotta, Alden Ehrenreich, O’Shea Jackson Jr. and mores will be released on February 24, 2023. Jimmy Warden has penned the script for the “character-driven thriller inspired by true events that took place in Kentucky in 1985.”

According to a New York Times article in 1985, the bear was found dead among 40 opened containers with traces of cocaine, apparently dropped from a plane by a convicted drug smuggler because he was carrying too heavy a load while parachuting.

Filming for the project wrapped in November 2021, with co-producer Christopher Miller congratulating the director at the time. He tweeted, “Big congrats to @ElizabethBanks & her team, amazing cast & crew, on wrapping principal photography of COCAINE BEAR! And thanks to beautiful [Ireland] for doubling as the US woods. We’ll have to digitally erase all the leprechauns & Aos Si fairies.” 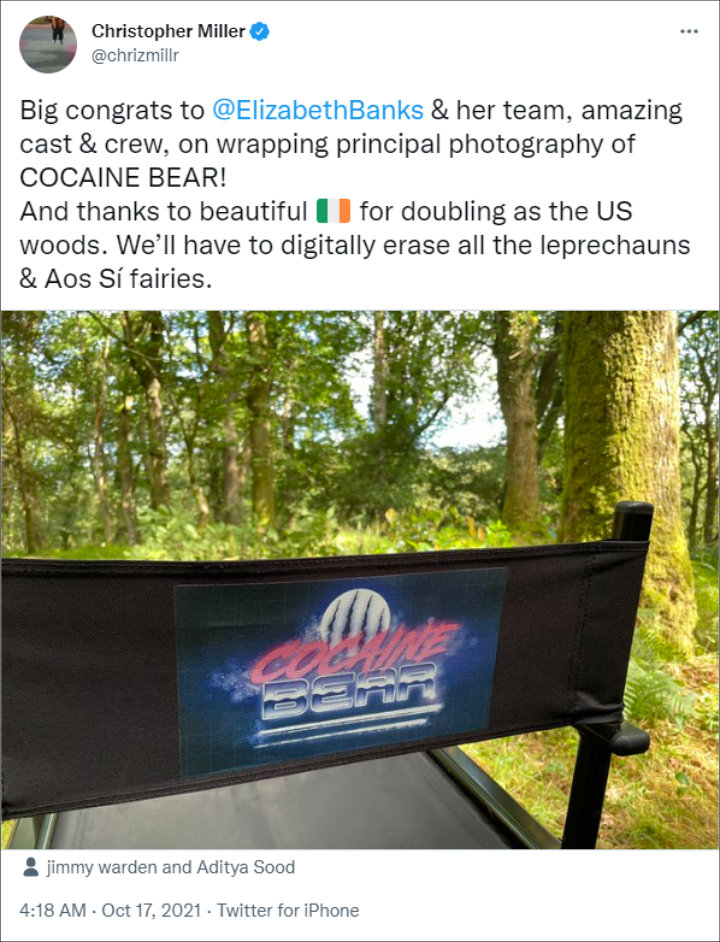 Banks previously helmed the 2019 take on “Charlie’s Angels“, but claimed that the film’s poor performance at the box office showed that men are unlikely to watch female-led action films. She said, “They’ll go and see a comic book movie with Wonder Woman and Captain Marvel because that’s a male genre.”

“So even though those are movies about women, they put them in the context of feeding the larger comic book world, so it’s all about, yes, you’re watching a Wonder Woman movie but we’re setting up three other characters or we’re setting up Justice League,” she further explained. “If this movie doesn’t make money it reinforces a stereotype in Hollywood that men don’t go see women do action movies.”

Ronnie Spector On Phil Spector: “A Brilliant Producer, But A Lousy Husband”