Aadi (played by Adam Hussain) has been taking a back seat on Coronation Street of late, what with his sibling Asha (Tanisha Gorey) having been the victim of a revenge porn storyline earlier this year. However, Wednesday night’s episode of the ITV soap saw her twin finally speak up as he lost his cool over his sister dating Corey Brent (Maximus Evans) – the boy who took sexual pictures of the teenager. With Dev (Jimmi Harkishin) constantly trying to fight his daughter’s corner and getting himself into mountains of debt to ensure images of her are kept offline, will his son take matters into his own hands and plot deadly revenge against his twin?

BREXIT BULLETIN: Sign up for our special edition newsletter with exclusive insight from this week’s crunch talks

The drama kicked off when the father-of-four wanted to enjoy a dinner with his youngest two children, though Asha was adamant she didn’t want to eat.

Whilst Dev was trying to convince his daughter to join him and Aadi at the table, the latter informed his family he had been chosen to play in a five-a-side football match.

Going straight over his head, the businessman was still more concerned about what his son’s sister was up to.

Annoyed he was being completely ignored, the teenager told his father: “You don’t even care,” to which the soap stalwart replied: “About what?”

“Me. It’s all about her,” the youngster hit back, to which the corner shop owner tried to explain his son had the wrong end of the stick. 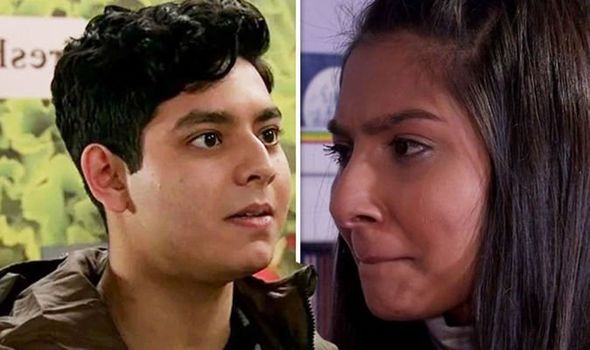 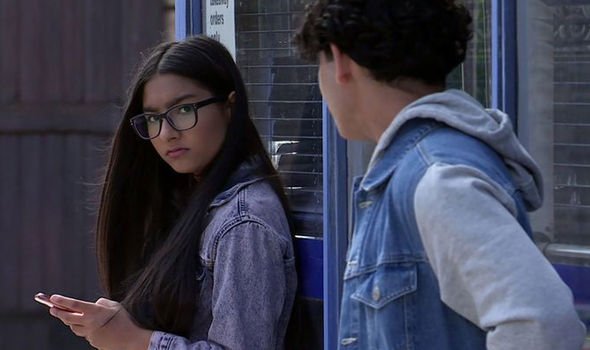 “Yeah, right. She brings Corey around, blatantly snogging him in front of your face,” the youngster declared, wth Asha furious her select rendezvous with her boyfriend had been blown.

After being told to “shut up” by his sister, Aadi declared: “Why should I? You get away with murder. I’d be grounded for that.”

“Oh, like you’re going to bring a girl around?” his twin spitefully remarked before their father jumped in to break the tension.

“Let’s not do this because Asha, she’s not going to be getting in touch with Corey again, right?” he told his daughter. 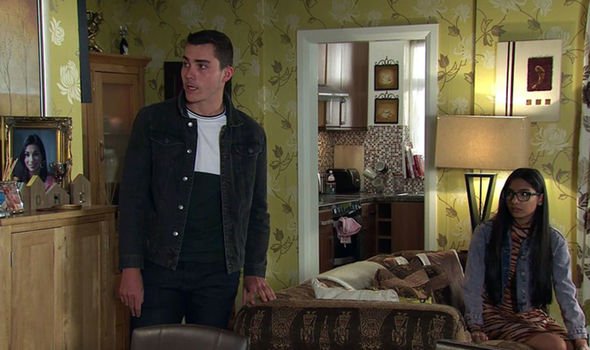 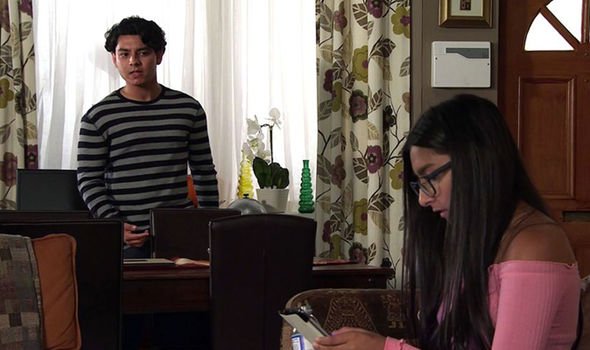 You get away with murder

“Yeah, right. She’s been messaging him on the iPad,” Aadi explained, getting his sibling into yet more trouble with Dev.

“Oh, stop stirring,” she replied, to which her furious twin brother exclaimed: “Why? You’ve been stirring my whole flaming life.”

It’s clear the twins are at war with one another, with there being some sort of tension between them since sexual images of the teenager indeed up online.

Jealous his sister is getting all the attention, despite getting back into a relationship with the boy who started all the trouble with her, will he make Corey his first victim?

The teenager might want to tell Corey a few home truths, with no intention of wanting to hurt him physically.

However, Asha’s boyfriend likes to goad his enemies and as a result, the pair might end up fighting one another.

As tensions accelerate beyond the point of no return, will Dev’s son see red and deal his rival a fatal punch which will kill him?

Some years ago, the schoolboy was in a very similar situation with Simon Barlow (Alex Baine) after a tussle between the children left the former fighting for his life.

This would surely be a heartbreaking blow for Asha who would be devastated her boyfriend was taken away from her in such cruel circumstances.

However, she might not exactly know it was her brother who ended Corey’s life, making the plot even more interesting as Aadi’s involvement is kept a secret.

Executive Producer Iain MacLeod recently teased there would be drama coming up for the youngsters of Weatherfield.

The soap boss told Express.co.uk and other publications: “It’ll be one of our biggest, serious social responsibility stories next year by a margin. It’s incredibly sad and tragic but a really important story.”