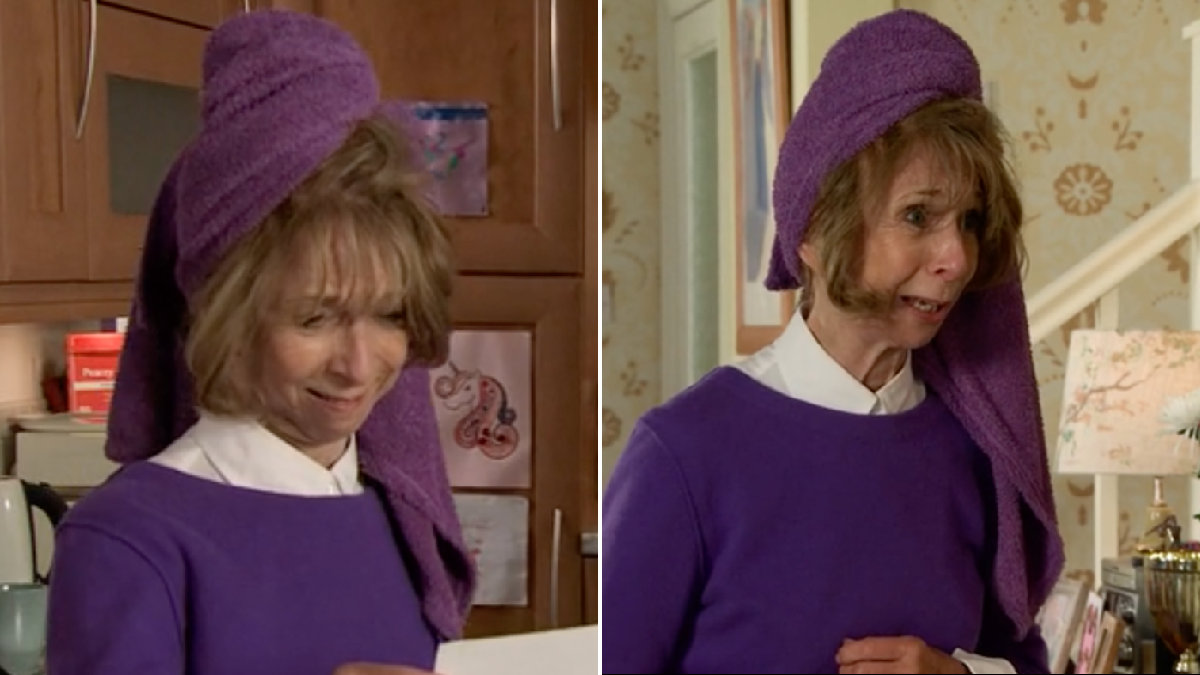 Coronation Street fans were over the moon to have Gail Rodwell (Helen Worth) back on their screens.

The soap legend had left the cobbles earlier this year in search of a new life, after she’d suffered a minor heart attack.

She promised her nearest and dearest at the time that she would return to the eponymous street, and she did just that on Wednesday (September 23), much to the delight of viewers.

Gail comeback is due to Norris Cole’s (Malcolm Hebden) funeral, which she attends with mum Audrey Roberts (Sue Nicholls) in upcoming scenes.

Audrey was overjoyed to set her sights on her daughter, who walked through the door of No.8 with a hat on her head, seemingly feeling self-conscious about what her hair looked like.

After settling in, Gail headed upstairs, before returning with a towel on her head – signifying that she’d washed her hair.

Fans, however, were left confused, with several claiming that Gail’s hair was evidently bone dry.

‘Lol, Gail wearing a towel on her hair when her hair is dry,’ wrote a fan, while another added: ‘What we need to know is why Gail has a towel on with dry hair?’

‘Did Gail only wash half of her hair?,’ asked one social media user.

One more viewer exclaimed: ‘Why has Gail got that bloody towel on her head, her hairs dry!,’

Did Gail only wash half of her hair? #Corrie

What we need to know is why Gail has a towel on with dry hair? #corrie

While some fans thought the scene in question was a ‘blunder’, perhaps Gail simply used a quick-dry towel?

Either way, it’s certainly good to have her back!

It’s unknown how long she is sticking around for, but let’s hope it’s for a while, as the cobbles just haven’t been the same without her!

Mind you, she could be running for cover soon, as she finds herself on the receiving end of Audrey’s wrath when a huge secret is exposed at Norris’ funeral tonight!