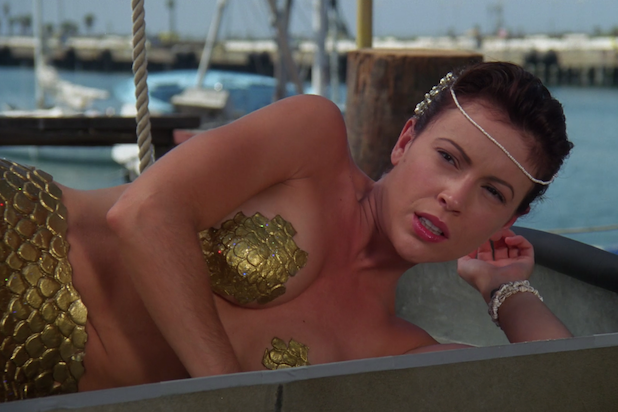 “Charmed” stars Alyssa Milano and Holly Marie Combs took issue with “Grey’s Anatomy” and “Station 19” showrunner Krista Vernoff’s explanation for why she left the now-ended sister-witch WB drama. The former co-stars fired back at remarks that Vernoff, a former writer and producer on “Charmed,” made about “creating something that’s now bad for the world” in an interview published Thursday.

“I signed on because ‘Charmed’ was a girl-power show, and about halfway through there was an episode where Alyssa Milano comes out in mermaid pasties and there was a huge spike in male viewership, and then every episode after, the question would come from the network, ‘How are we getting the girls naked this week?’” Vernoff, who left the show in 2004, told The Hollywood Reporter.

The episode in question is the two-part Season 5 premiere, “A Witch’s Tail,” which aired in September 2002 and featured Milano’s witch character, Phoebe Halliwell, being transformed into a mermaid. (See photo above.)

Vernoff told THR, “They were throwing money at me, and the number keeps going up, and there’s all this pressure, and all I can think is, ‘I’m creating something that’s now bad for the world, and I’ve had enough bad for the world in my life.’”

Milano and Combs, who starred as sisters on The WB’s “Charmed” throughout its eight-season run from 1998-2006 — first alongside Shannen Doherty and later Rose McGowan — took issue with Vernoff’s remarks in a series of tweets.

“Well, this absolutely broke my heart,” Milano wrote. “I hope we didn’t make something that was ‘bad for the world’ for eight years. I think we gave permission to a generation of women to be themselves and to be strong and own their sexuality. I’m so proud of what this show meant to so many.”

“I can attest 1000% Charmed was not bad for the world,” Combs said in response to Milano. “The reasons and people are too long to list. Maybe it was bad for Krista’s world at the time. End story.” She added, “And the fact that we can still stand up for ourselves and the show and the people who loved it proves this. I never cared what producer or network exec wanted us more naked for their $. And still don’t. We knew how to rally against it and found our own power. And still do. #Facts”

Hours after the THR interview was published, Vernoff took to Twitter to respond to the backlash.

“I want to clarify here for Charmed fans and also for my colleagues from Charmed who I love and admire, that I do not believe that the show was bad for the world,” Vernoff tweeted. “I felt that the objectifying notes were bad for the world – and were demoralizing for me. All love to Charmed.”

Combs responded to Vernoff with this tweet referring to the upcoming premiere of the “Grey’s” showrunner’s new ABC drama “Rebel”: “You had the power to change that. And fortunately still do now. #Rebel”

In a followup thread, Combs expanded on her thoughts about Vernoff’s experience on “Charmed.”

“In 2004 when Krista left I was pregnant with my first son and I went back to work when he was 3 months old. I and my new baby were completely embraced on that set. Trust when I say there was enough girl and women and man power daily to help me raise an amazing now 16 yr old boy,” Combs tweeted. “I’m sorry Krista’s [behind-the-scenes] experience was different. Had we been made aware of comments or directions like that we would have loudly disagreed and been ‘bitches’ about it. Unafraid. Undeterred. As always. Widely reported. Universally known. And crazily … still talked about. Also we all chose our outfits or lack thereof. The WB nor our producers ever controlled us or our choices after season 1. Cuz it was a good year for them. We changed dialogue at will and refused storylines when it was warranted. Our execs will attest to that as well I’m sure.”

Representatives for CBS TV Studios, the studio with the rights to “Charmed,” did not immediately respond to TheWrap’s request for comment on Vernoff’s remarks about the show to THR.

See the tweets from Vernoff, Milano and Combs below.

'Counting On': Jill Duggar Insists She "Loves" Staying Home With her Boys, But Fans are Unconvinced.