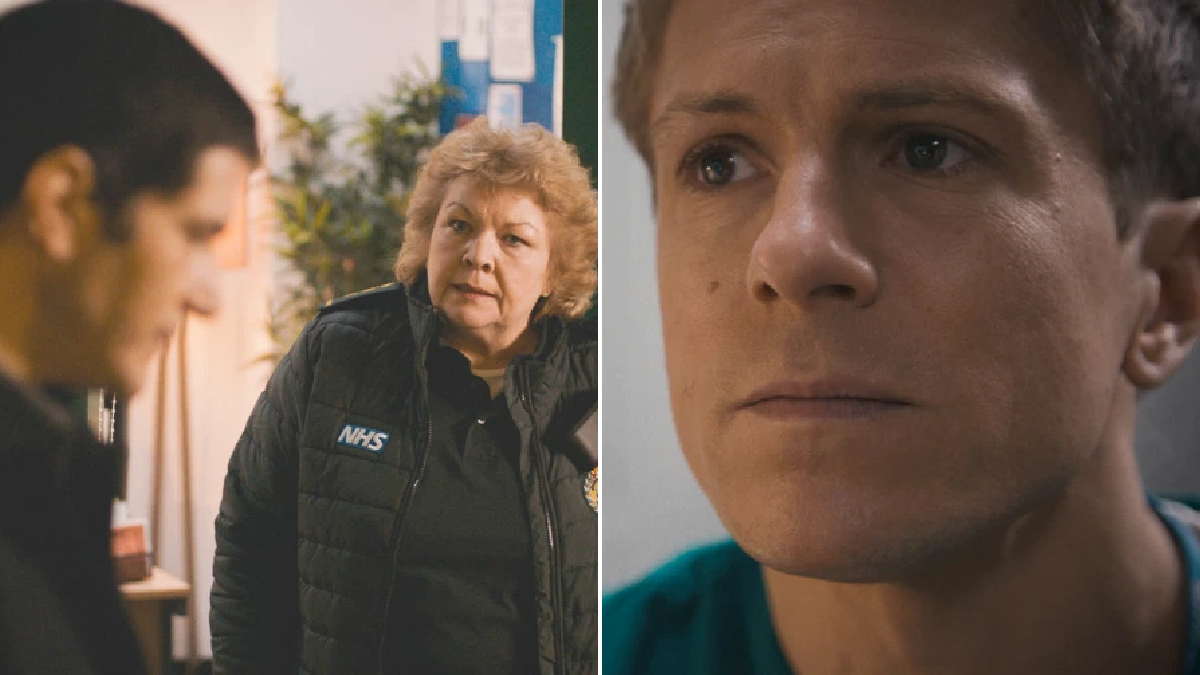 Lev (Uriel Emil) was blissfully happy at the start of the first of tonight’s Casualty double bill. He told boyfriend Xander (Danny Szam) that being with him made him feel ‘warm and safe.’ This perfect happiness only lasted as long as they both stayed indoors, because as soon as they ventured out of the house for a coffee, Lev’s insecurities about being gay were in full effect. When a homophobic youth, Sam, had a go at him, Lev reacted instinctively and angrily. This wasn’t the worst of it, though. When Sam was beaten up by some drug dealers and ended up in hospital, his taunting of Lev made Lev punch him, in front of half the ED.

Jan (Di Botcher) knew that there were mitigating circumstances and tried to persuade Lev to tell her what had led up to him punching Sam so she could defend him. Lev isn’t comfortable at all with being gay, though, and refused to say anything. As a result, he was arrested and his career might be at risk.

Faith (Kirsty Mitchell) wanted to do something to help and she contacted Xander after seeing his name come up on Lev’s phone. She asked him to try to convince Lev to tell the police everything, but Xander said he couldn’t cope with Lev’s violent streak. Faith knows what’s behind her husband’s behaviour – his upbringing that ingrained homophobia into him so that he hates himself – and she told Xander, ‘I will never give up on him, never.’

Someone who gives up rather too easily is Ethan (George Rainsford), who once again missed the opportunity to tell Fenisha (Olivia D’Lima) that he loves her and wants to be with her. She so obviously feels the same way, but currently Ethan feels he’s doing the right thing for her and baby Bodhi by giving Fenisha the chance to seek happiness with her former fiance Matthew (Osi Okerafor).

Ethan has been having some symptoms that make him think he’s becoming ill with Huntington’s – we saw his hand spasm as he got ready to suture a patient and he’s keeping a diary of similar events – but he’s hiding this from everyone, not even giving Fenisha the chance to decide whether she wants to support him through it. Someone needs to have a word with him. Rash (Neet Mohan) does try, but so far Ethan hasn’t really listened.

Tina (Adele James) and Jacob (Charles Venn) were radiantly happy and in love last week, which meant that something was bound to go wrong this week – and it did. Tina strongly hinted that she would like to move in to Masters Towers with Jacob, but he said he liked having his ‘man cave’ to himself. This was a cue for all sorts of insecurities to surface for Tina. She got jealous that Jacob was being nice to other female staff members, she tried flirting with Matthew in revenge, she messed up in resus and Jade (Gabriella Leon) had to step in. None of this worked, so finally she resorted to being really horrible to a patient until he hit her, at which point she was able to call Jacob for help.

After he patched her up she told him she was thinking of moving to another hospital, and this did the trick. She’s now been given the key to Jacob’s door, so she’s once again happy – until the next thing that upsets her.

There was better luck for Robyn (Amanda Henderson), as new receptionist Paul (Paul Popplewell) turned out to be an old school friend of hers who had quite the soft spot for her. He’s even offered her the use of his mum’s static caravan in Morecambe Bay, which should be quite a refreshing holiday as long as Paul’s friends don’t turn up – the friends who apparently want him to carry on with his former life of crime. Robyn doesn’t need that sort of stress in her life.

And what’s going on with Charlie (Derek Thompson)? A patient’s nan insisted that she knew Charlie, although he denied all knowledge of her and then it appeared the same woman waved at him from a distance.

Has Charlie been sleepwalking and getting up to random stuff? Has he joined a dating app and all these ladies have swiped right? Does he have an identical twin brother he was previously unaware of? We need to know more.

Sue Haasler is the author of five novels and the official BBC Holby City book, which you can read about here.