Home » TV & Movies » Britain’s Got Talent fans baffled after spotting hidden feature of act ‘We can see that!’

ITV viewers saw Miracle the Dog and owner Amanda Leask back for tonight’s latest instalment of Britain’s Got Talent after leaving fans emotional with their previous performance. Tonight’s theatre-style act also proved a tear-jerker for those watching at home but some couldn’t help but comment on something strange they spotted during the performance, after realising there was a third person involved with the act.

The public was introduced to the heartbreaking story of Miracle and Amanda earlier this year.

Amanda detailed how she had rescued the pup from the meat trade and was the proud owner of over 40 dogs – most of them rescues.

The judges were left emotional upon their previous encounter with the pair and sent them straight through to the next stage of the competition.

However, despite many fans enjoying seeing the pair back on-screen once more, they were distracted by another part of the routine. 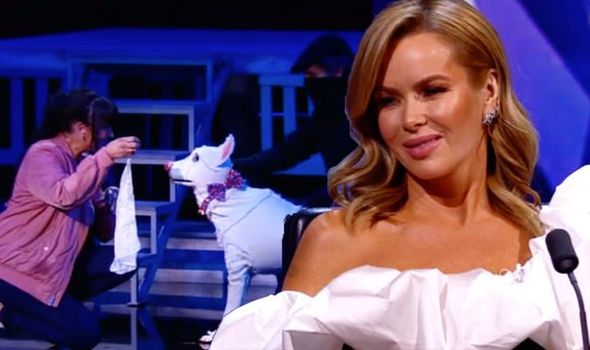 During the first part of the act, someone dressed in black could be seen operating a puppet based on Amanda’s furry friend.

But this left some watching confused, asking why they had not been better hidden, leading to many comments on social media site Twitter.

After the performance had finished, one viewer remarked: “I mean they could’ve done a better job of hiding that guy  #BGT #BritainsGotTalent.”

Another shared: “I must admit, this is my favourite act but I wasn’t that impressed probably because you could see the man very well cos of the lights and camera angles #BGT.”

Is the Spice Girls tour cancelled? Mel B has been taken to hospital just days before the opening night