The 66-year-old is most famous for his role as Walter White in the award-winning series Breaking Bad from 2008 to 2013. 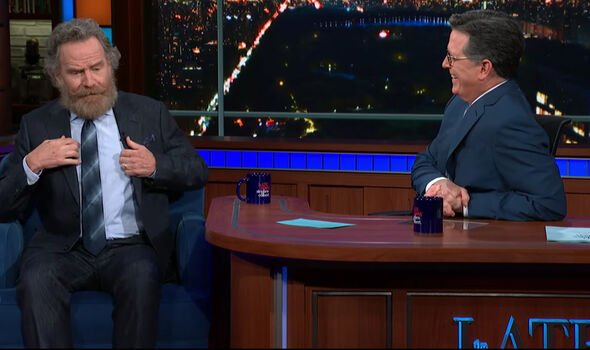 In the series, Bryan rocked an iconic look, and became known for his bald head and goatee.

In real life, the actor has typically had a full head of short hair, and a clean-shaven face.

However, the star recently debuted a brand new look whilst appearing on The Late Show with Stephen Colbert.

Bryan was on the show to promote his new project Jerry and Marge Go Large, where he plays one half of a lottery-winning couple who use their winnings to revive their small town.

During his TV interview, Bryan shocked fans with his long silver hair, which was paired with a full, grown-out beard.

Of course, it didn't take long for the show's host Stephen Colbert to address the actors's new look.

Only moments after Bryan sat down for a chat on the CBS show, Stephen said: "Now, Bryan, it’s lovely to see you, thank you, I know you’re a busy man…"

He cheekily added: "…What with being a sea captain now".

Bryan took it well as the studio audience roared with laughter.

He replied: "I could be a sea captain, I could do the remake of Miracle on 34th Street.

“Or I could be an Ol’ Timer Prospecter!". Nicole Scherzinger Angry for Getting Snubbed From ‘Cats’ Movie