It’s not news to say that Hollywood relies ever more heavily on familiarity and nostalgia. But the nostalgia is getting stranger, generating movies that can seem less like products of the human mind than of some artificial intelligence gone awry.

Such a movie is Pokemon: Detective Pikachu, based on the 2016 computer game of the same name, itself a spin-off of the multimedia Pokemon franchise which has had multiple resurgences since it was launched in Japan in the mid-1990s. 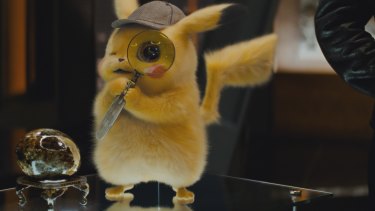 Pokemon are “pocket monsters”: small, magical, grotesquely adorable creatures that are collected by human fans (otherwise known as “Pokemon trainers”) so they can be pitted against each other in non-lethal gladiatorial tournaments.

As the first live-action Pokemon movie, Detective Pikachu carries this mythology a step further. The setting is the vaguely futuristic Ryme City, where humans and Pokemon live in harmony according to the principles laid down by benevolent zillionaire Howard Clifford (Bill Nighy).

But even this seeming utopia has its mean streets, and down these streets a Pokemon must waddle. Not just any Pokemon, moreover, but Pikachu (voiced by Ryan Reynolds), the mascot of the series from the outset — a bright yellow, rabbit-eared blob who looks to be the product of a gene-splicing experiment meant to ensure maximum cuteness.

Beneath this cuddly exterior, however, beats the heart of a hardboiled police detective, as the film’s 21-year-old human hero Tim Goodman (Justice Smith) learns when he arrives in Ryme City in the wake of the apparent death of his father Harry, Pikachu’s partner on the force.

Unlike other humans, Tim is mysteriously able to hear Pikachu’s real voice, so the pair team up to find out what really happened to Harry, with intermittent help from budding reporter Lucy Stevens (Kathryn Newton, whose role seems to have been cut back from what was first planned).

Questions of translation loom over this film in more than one sense. The Detective Pikachu computer game, after all, was originally developed in Japan and this project might have been handled best by a Japanese director such as Takashi Miike, an ultra-prolific wild man not afraid to dabble in family-friendly whimsy. 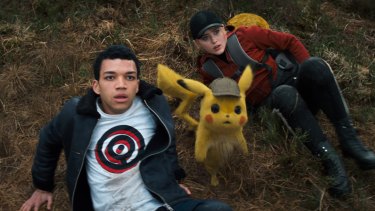 As an American approaching the material from afar, director Rob Letterman (Monsters Vs Aliens) has to steer his own course. With its dozens of Pokemon characters, the film is, on the one hand, an impressive technical feat, fusing live action and digital animation on a level that might not have been possible even five years ago.

On the other hand, it’s yet another throwback, less to the 1990s heyday of Pokemon than to the 1980s heyday of Hollywood pop gimmickry. The main template appears to be Who Framed Roger Rabbit?, another zany mystery with a cast mingling humans and animated figures.

Some of the moody lighting recalls Blade Runner, which played a similar game with humans and androids, and there are traces of many other old favourites from the same era, including Gremlins, Ghostbusters and Tim Burton’s Batman.

Detective Pikachu is bizarre and familiar, but even within the familiarity there are a few surprises. The first surprise is that the mystery plot is played largely straight, with multiple suspects and carefully planted red herrings, though the final revelations don’t make an awful lot of sense.

The second surprise is that Pikachu proves to be a softie after all, at least by comparison with the character Reynolds is best-known for, the wisecracking superhero Deadpool. His worst vices are a caffeine addiction and the occasional off-colour quip: he doesn’t lust after other Pokemons, nor does he tend to use lethal violence against his foes.

The third surprise springs from the first two: Detective Pikachu genuinely qualifies as family entertainment which parents and children can watch together and both might enjoy. This is rare enough – Letterman and his team can give themselves a pat on the back — though where sheer imagination is concerned, the film still isn’t a patch on Miike’s The Great Yokai War.

Spoilers: Maria learns the terrible truth about Gary in Corrie?

'I'll Be Gone in the Dark' Episode 4: Was the Golden State Killer Also the Visalia Ransacker?