America’s show dog owners aren’t going to let a global pandemic get in the way of their competition. The National Dog Show will go forward as scheduled next month, albeit with socially distanced dog handlers and masked judges and without some of the usual fanfare. That preposterous commitment to being named Best in Show, it turns out, makes for great comedy.

Christopher Guest explored the subculture 20 years ago — and pre any COVID-19 precautions — in the seminal comedy Best in Show, his faux documentary centered on the Mayflower Kennel Club Dog Show and the quirky characters competing in it. To mark the anniversary, ET assembled Guest and members of his cast for a virtual reunion.

“What have you done with your eyebrows? They look amazing,” asks Michael McKean upon seeing his onscreen better half, John Michael Higgins.

“Me? I’ve painted them a rich brown,” Higgins replies.

A Zoom notification sounds the arrival of another cast member and without missing a beat, McKean quips, “Speaking of rich, here’s Jane Lynch!”

Moments later, newly minted Emmy winners Eugene Levy and Catherine O’Hara join to a round of congratulatory cheers. (“I don’t know what you mean,” Levy deadpans, prompting McKean to joke, “He forgot already.”) With the troupe together again, talk turns to Best in Show, paying tribute to the late, great Fred Willard and revealing where their characters would be today.

“I think the most fun we’ve had working was doing these movies. We have a lot of great memories,” Levy tells ET’s Nischelle Turner. Better still? “The movie turned out great! It’s one of my favorites.” 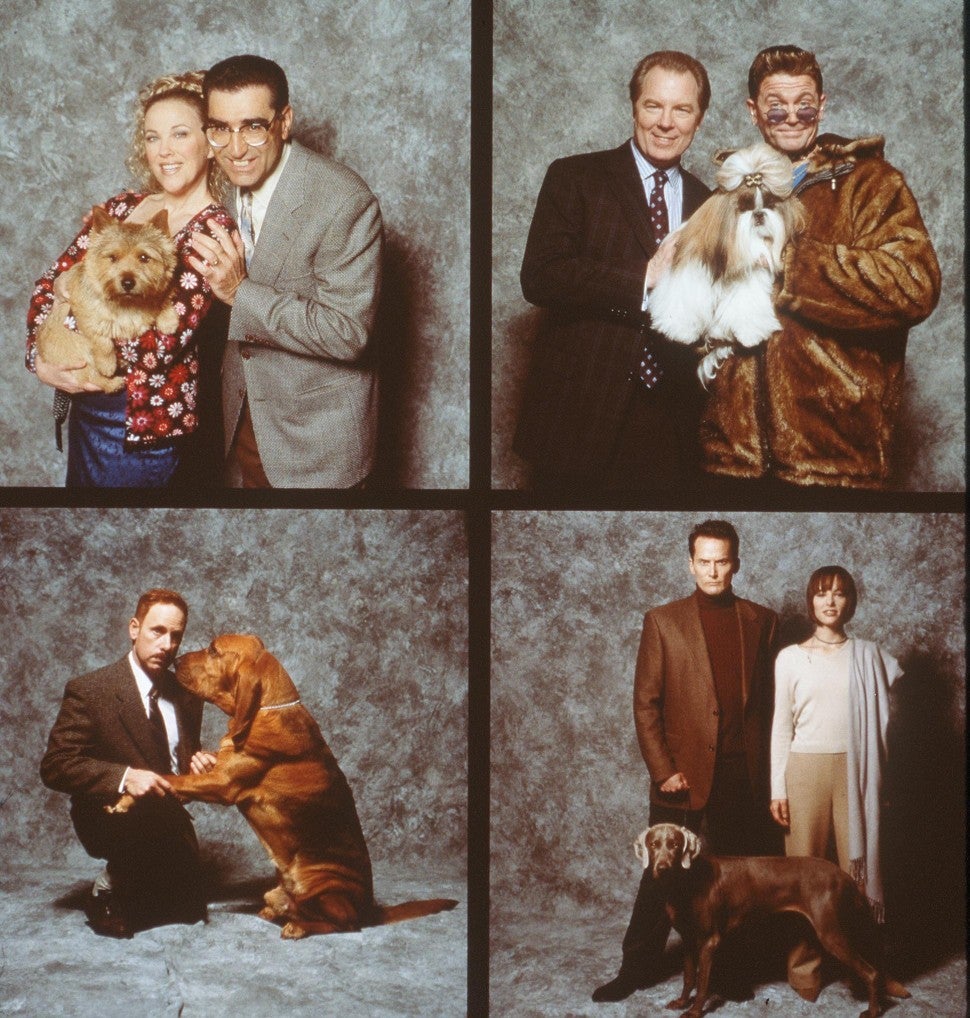 Christopher Guest and Eugene Levy wanted to see if they could strike lightning twice. Following the success of 1996’s “Waiting for Guffman,” the duo got together to outline a film set in the world of dog shows. They assembled a cast of Guest’s regular players and set out to improvise their way through the shoot.

CHRISTOPHER GUEST (Harlan Pepper): You begin with the premise that you need actors who can improvise, so that’s a fairly small group of people. Normally you have hundreds of people, potentially, but this is narrowed down and it’s people I’ve worked with before, so that’s where it all begins.

CATHERINE O’HARA (Cookie Fleck): I think when I first met Chris and Eugene about this, they talked about another role. I can’t say it was Jennifer [Coolidge’s], because only Jennifer can do Jennifer. There’s no way I could’ve done it! But I said, “Oh, can I be Eugene’s wife?!”

MICHAEL McKEAN (Stefan Vanderhoof): Chris and Eugene did a pilot that I had seen Higgins in and I’m like, “Is this guy really this good?” And he was not only that good, but he just knows everything I don’t. And that’s, like, a lot.

McKEAN: He was a very good boyfriend. Here’s our relationship: He was the balloon, I was the string. All I had to do was let him go a little bit and he would go.

O’HARA: There was definitely magic. Watching everyone improvise was the best, to just get to see everyone do what they do. And to accuse people of making up stuff ahead of time, because they were so quick, so great and funny.

EUGENE LEVY (Gerry Fleck): We learned on Waiting for Guffman that if you laugh during a scene when it’s being filmed, it only makes the day longer. And when you’re improvising a movie, if you laugh in the middle of a take, chances are you’re not going to get the magic back that was happening in that moment. We actually learned, let’s try and get through it and let the audience do the laughing. 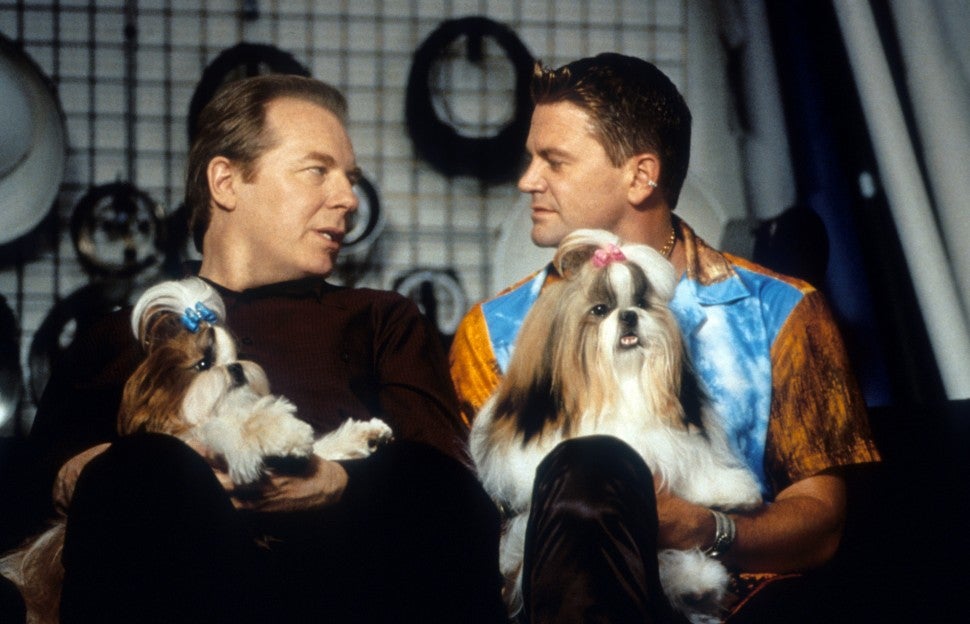 “Best in Show” opened in theaters in Fall of 2000 and was recognized by the National Board of Review for excellence in filmmaking and nominated at the Golden Globes. In the years since, it has only become more beloved, now recognized as one of the greatest comedies ever made.

HIGGINS: I want to emphasize something Eugene said, which is that I’m amazed this movie is so watchable considering how much fun we were having. Usually, it doesn’t work out that way. If everyone’s goofing off or just having a good time, it always, like, goes right in the toilet onto the screen. I don’t know why. And when you’re having a miserable time, it’s like, “That was a brilliant movie!” But I’m amazed that the happiness and joy that went along with making Best in Show really translated so well onto the screen. It’s very clear as you watch the movie 20 years later that these people are having a really good time.

JANE LYNCH (Christy Cummings): It stands up! Sometimes you can go back and revisit a movie 20 years later and you go, “What was I laughing at?” But in fact, I was laughing at even more stuff. I think it’s probably a timeless film. I think it’ll probably live in that pantheon of films that are still funny after many years.

The movie also has a newfound poignancy following the death of Fred Willard in May. The actor, a frequent Guest collaborator, played the dog show’s clueless but curious, off-color color commentator Buck Laughlin.

GUEST: Fred was unique. And that’s not something I say a lot about a lot of people. Fred has this demeanor, I think to the audience he looked like a regular person — a good-looking guy, completely straight person. There’s no irony. There’s nothing in what he says that betrays his inner thickness and I think there was only one person that could play that part. And Fred worked for one day on that film. And it was extraordinary to see.

LEVY: When the idea [for the movie] first came up, I remember saying to Chris, “It’s a great idea, but how do we make the third act funny? How do we make a dog show funny? Where are the laughs going to be coming from?” It wasn’t until Chris said, “Well, what if Fred is our color commentator during the broadcast?” That just made so much sense. There are the laughs.

O’HARA: He actually would have reams of notes that he thought of five minutes before, but he also didn’t even need them. He was someone who could think in terms of set up and punchline, he just naturally thought that way. He was so barely in touch with his adult within and so fun. 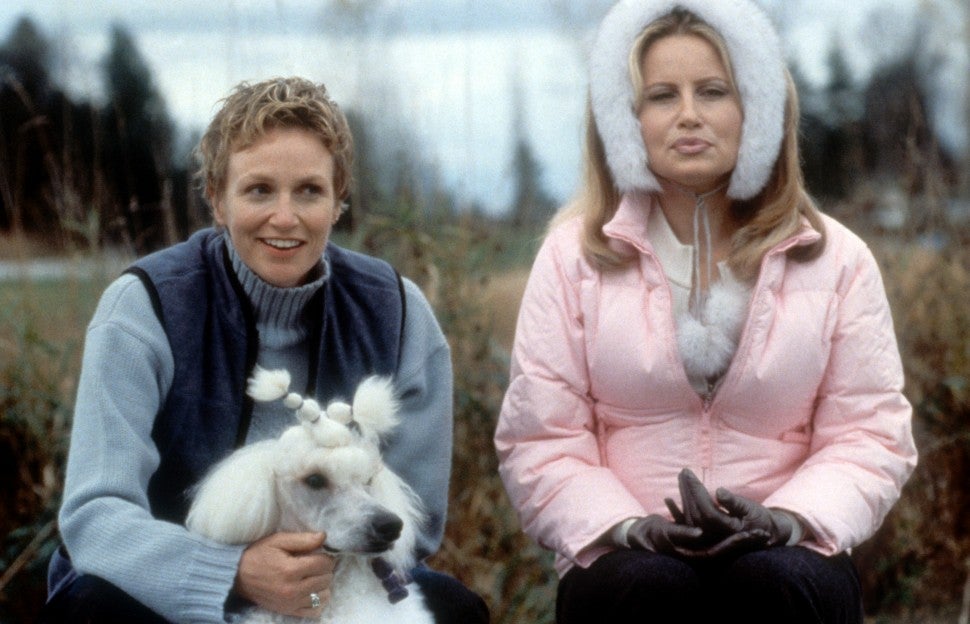 After Cookie and Gerry’s terrier wins Best in Show, the movie reveals what became of all the contestants: Misguided music careers, ventures into ventriloquism and “American B**ch,” a magazine for lesbian purebred dog owners. Now, 20 years on, the cast imagines where their characters would be.

O’HARA: [Gerry and I] would have some kind of sad podcast.

LEVY: That’s a good one. We would have a podcast, and Gerry wouldn’t have too much to say, I don’t think, because of the deterioration that would have gone on upstairs.

McKEAN: Higgins and I would be married, I think. Very happily.

GUEST: My character went back to an undisclosed location in the south and he’s living with a Native American woman in a tent.

LYNCH: I think Christy Cummings would be blacklisted from the world of dog shows for having bet against herself. She’s probably running some very unsuccessful scams in some other discipline.

The cast hasn’t strayed too far from one another over the years, with Levy and O’Hara having starred together on “Schitt’s Creek” and Guest bringing Lynch and Higgins back for 2016’s “Mascots.” As for getting the whole gang back together again?

LYNCH: It’s up to Christopher, isn’t it?

HIGGINS: I have a great nursing home pitch, Chris.

LYNCH: I got a Civil War reenactment pitch for you. Because he loves to hear a pitch!

Caroline Flack’s new man Lewis Burton is ‘playing her and still in love with me’, says his ex – The Sun