The US Election has been dominating headlines for the past few months and finally had some sort of resolve when Joe Biden was announced as President-Elect earlier this week. However, with Donald Trump showing no intention of conceding, the heated predicament is bound to continue and it was something Dan Walker was keen to talk to Amy Pope about on today’s BBC Breakfast. But it wasn’t the pair’s discussion which caught the eye but rather a foul-worded sign the BBC aired during the interview.

“Give us an idea about your time working with Barack Obama how frustrating it was to not have a majority in the Senate, and it looks like President Biden will have that same issue.

“So it might well be difficult for him to get some of his policies through. Is that going to be the case again?” Dan asked.

The BBC Breakfast guest replied: “Absolutely. So the legislative policies are going to be a very, very hard road.” 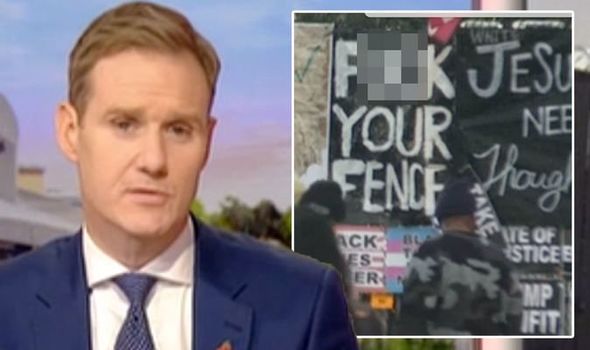 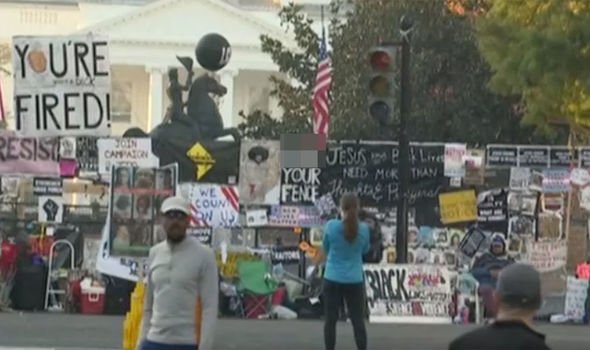 However, as Amy continued to speak, footage of protests outside the White House began to play.

And amidst the protestors and placards was a rudely-worded sign which wasn’t blurred out.

The sign which read “F**K YOUR FENCE” could be seen in plain sight, and it didn’t take long for BBC One viewers to make their anger known.

“@mrdanwalker @BBCBreakfast Nice footage of fence in front of Whitehouse with words F**k your fence,” vented one fan on Twitter. “Surely film could of been spliced.” 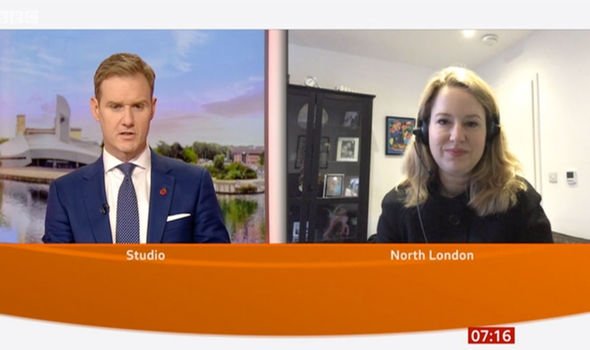 A second echoed: “@bbc @BBCBreakfast have you dropped your standards? Any reason to keep showing the words ‘f*** your fence’ on #bbcbreakfast?”

“Do you have trainees in charge of vetting content? Perhaps you should train them on blurring out offensive content.”

Another concurred: “Why are @BBCBreakfast not blurring out the offensive ‘f**k your fence’ banner in their recap of the weekend events at the White House?

“@BBCBreakfast Despite many agreeing with the sentiment I’m not sure that showing a sign outside the Whitehouse that reads ‘F**K YOUR FENCE’ is really for breakfast TV,” added a fourth.

While a fifth weighed in: “BBC Breakfast showing footage from outside the White House with a huge placard clearly visible saying “F**K YOUR FENCE’.”

Dan and Amy appeared to gloss over the explicit blunder as the latter continued with her retort.

“Something like adding a public option for healthcare, some of the climate change initiatives, for example,” she said.

“All of that is going to be really tough.”

The two also touched on whether Mr Biden will be able to tackle coronavirus, which he’s prioritised as his number one point to address.

Dan and Amy also discussed when and if Mr Trump decides to concede after losing the US Election.

BBC Breakfast continues daily at 6am on BBC One.