BAFTA TV Awards aired this evening and saw an eager team of I’m a Celebrity… Get Me Out Of Here! arrive on stage to accept their award for Best Reality show.

Dec began by taking centre stage before the podium alongside Holly Willoughby, who accompanied him in this year’s edition of the show.

Ant McPartlin stepped down from the show this year after a drink driving charge earlier in the year.

Dec dedicated his speech to Holly, whilst also taking time to pay tribute to Ant.

He began: “Thank you BAFTA – thank you ITV for your continued support.

“This obviously goes to a very hard, dedicated support team.”

He went on to say: “I’d like to say thank you to Holly for helping me out last year.

“Standing in for Ant who has reluctantly come up here tonight – there he is – because he’s still part of the team obviously.”

Ant smiled through the speech whilst standing next to Dec and Holly, showing viewers how pleased he was for his co-stars.

Dec then went on to praise another one of his colleagues who arrived on the stage, adding: “As well as a special appearance from Medic Bob!” 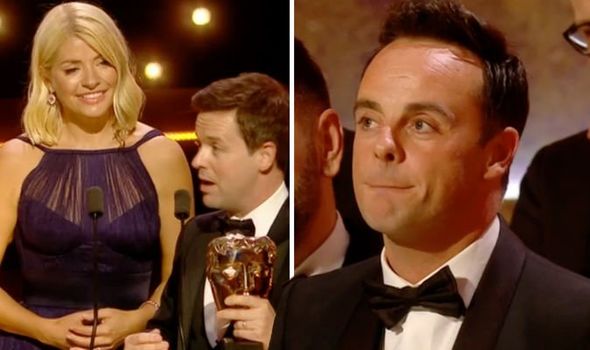 Earlier in the show host Graham Norton began the award ceremony with a monologue.

In the speech he lashed out at a number of celebrities and their shows in a humorous way.

And he began by talking about Line of Duty, and telling fans of the show they had missed its finale.

But he quickly connected it to Strictly Come Dancing by taking a cheeky swipe at former celebrity star of the show Seann Walsh.

He said: “The interviews! They were incredible. 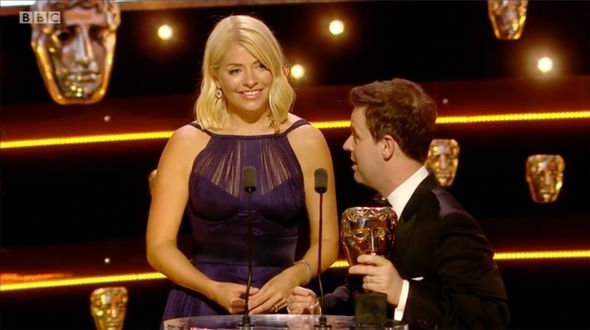 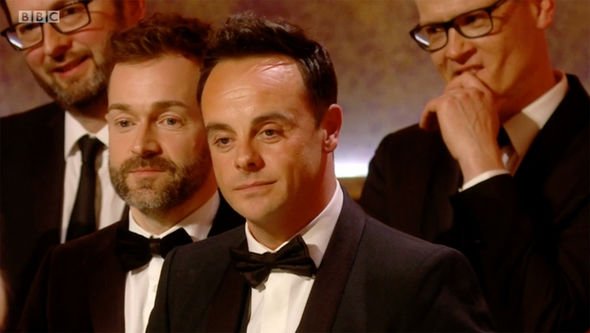 “A more forensically detailed interrogation of times, dates, and mobile phone data hasn’t been seen since that time Seann Walsh got home late from Strictly practice.”

The camera panned to Tess Daly and Claudia Winkleman – hosts of Strictly Come Dancing – who looked a little mortified.

Tess closed her eyes and shook her head, while Claudia attempted to stifle a laugh.

Graham gave a cheeky grin before moving on to the next segment of the ceremony.