The wrestling icon launched the performer through a shelving unit and ended up doing him some damage. 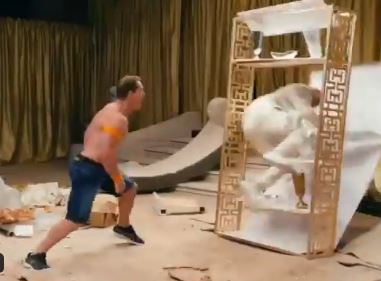 But following a lack of proper preparation, Andre was taken to hospital after the botched moved.

The clip shows both men screaming and throwing objects around the set before Cena grabs Andre by the collar.

He then launches the actor through a set of shelves which collapse on his prone body.

The pair exchange brief lines with Andre still on the floor before the scene shows him holding his head and looking confused.

And speaking about the incident on the Jimmy Kimmel show, Andre refused to blame the WWE star for his injury.

Andre revealed Cena performed the stunt correctly but they hadn't prepared for the trick enough beforehand.

Having been taken to hospital after filming finished, Andre discovered a 'Bugs Bunny' bump on his head.

Last week it emerged Cena and The Undertaker are set to make shock WWE returns.

But organisation head Vince McMahon won't sanction the move until fans are allowed back.

With Wrestlemania 37 still some months away, plans are being put in place to wow fans with a shock match-up.

Nothing off limits in Yankees’ playoff pitching scenarios