WOLVES' new Adidas away strip was given an emphatic thumbs-down by shocked supporters with one describing it as "chewed up blue crayon cow s***e". 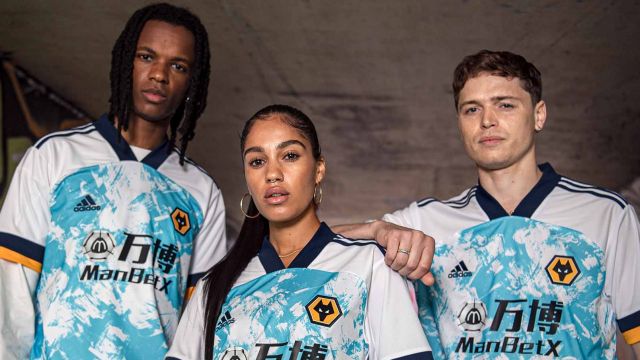 It is described as an ‘edgy blue and white shirt.’

But within hours of it being launched 62 per cent of Wolves fans made it clear it wasn’t fit for their players, with one describing it as ‘an abomination.’

They swiftly took to social media to slam the ‘unique and urban design,’ which was how Wolves’ described their controversial new away shirt.

Wolves fan Aaron Freeman tweeted : "Might support the lower league clubs, buy this and sew a Wolves badge on.

"Rather invest in the struggling lower league teams than buy that pile of chewed up blue crayon cow shite."

Other comments included: “This is awful. Definitely going to go down on the bad kits list,” and “This is horrendous. Looks like someone wearing a vest over a long-sleeved white top. Awful.”

Another shocked supporter pointed out: “We’re supposed to be a football team".

While one frustrated fan suggested: “Someone has mated the Germany top with a retro Coventry strip and this was the unfortunate offspring.”

Other comments included: “Had to check it wasn’t April 1st. This has to be the worst kit I have ever seen. Even worse than the Goodyear one,” and “My eyes! You cannot unsee what’s already been seen.”

A Wolves source admitted the striking new away kit might take a little bit of getting used to and could be a ‘slow burner.’

Hopefully traditionalist fans won’t try and put the theory to the test!

And it's not the first time a kit release doesn't go down well with fans.

Back in May, Manchester City's third kit was leaked online – and roundly slammed.

"Cells under a microscope", "the lining of a suit jacket" and "like broken glass" were just some of the comments on that one.