An objection and a steward's inquiry led to stunning end to the 2019 Kentucky Derby with Country House declared the winner over Maximum Security.

So what is an objection?

An objection is a "claim of foul lodged by rider, patrol judge or other official. If lodged by official, it is called an inquiry," according to a racing glossary compiled by Daily Racing Form.

Has a Kentucky Derby winner been disqualified over an objection?

No. Country House became the first horse to win the Kentucky Derby over an objection. However, Dancer's Image was disqualified in 1968 after a post-race urine analysis found traces of a banned substance and Forward Pass was declared the winner. 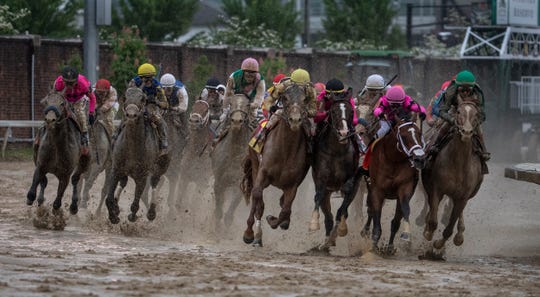 Maximum Security, second from left, bumps into other horses on the lead at the head of the stretch. Maximum Security was taken down for interference. (Photo: By Pat McDonogh, Courier JournaL)

Who can raise an objection?

It can be called for by stewards, the owner or trainer of a horse, or by a jockey.

Racing stewards who serve as officials for races. Racing stewards oversee races and enforce rules. They also investigate infractions and can hand out discipline such asSaturday's disqualification of Maximum Security.

Adam Peaty: Tough to know whether Olympics should go ahead in middle of pandemic