New Australian Diamonds coach Stacey Marinkovich has paid tribute to her forerunners in the high-profile role but insists she will put her on spin on the world's No.1 netball team.

The current West Coast Fever coach was unveiled on Saturday after an exhaustive search. Marinkovich takes over from Lisa Alexander, who finished her nine-year tenure at the top of the No.1 team in the sport earlier in the year. 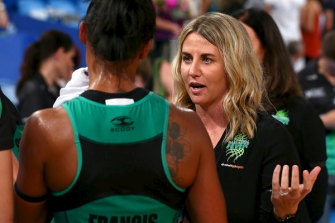 Marinkovich has been coaching for more than a decade and has already had a taste of the international game with her work as a specialist centre court coach of the Australian Development Squad and Australian Fast5 head coach.

She was the coach of the year in 2018 and had a distinguished playing career as well, having stepped out for the Perth Orioles and West Coast Fever until her retirement from the court in 2009.

She said she was humbled to be given the task to steer one of Australia's most successful international teams across any sport and would build on the solid foundations, as well as add her own flair and style to the squad.

"I'm following in the footsteps of incredible coaches, all have their own unique identity. No coach is ever the same. It's bringing my skills to build connectoins and add a flavour that shows a bit of a different direction as well," Marinkovich said.

"I'm people-focused. It's about the cohesion and collaboration. You need to be able to challenge and move together. My strength is bringing people together and empowering the skillsets of others."

The appointment allows Marinkovich to continue as Fever coach until the end of the Super Netball season. Once that concludes, she will dive in to prepare for major tournaments – COVID-19 pending – like the Commonwealth Games in Birmingham in 2022 and the 2023 World Cup in South Africa.

It's been a testing season for all sides in the Queensland bubble but there may be one advantage. Marinkovich has enjoyed a ringside seat to a bevy of games in the tournament-style campaign, allowing her to see who is in form and who is coping with the pressure.

That could end up counting at the selection table when the time comes to piece together the first squad under the new mentor.

"Games are coming thick and fast," Marinkovich said. "You're aware of how people are playing, its great to have everyone in the same environment. You can see how people are coping."

Netball Australia chief executive Marne Fechner said it was a difficult decision given the long list of quality applicants.

"Australia is spoilt for choice when it comes to high quality coaches and the quality of the applicants, as you would expect, was outstanding. The head coach role is critical within the context of our national high-performance system and we are excited to have Stacey stepping into the role, she is an outstanding coach and leader," Fechner said.

"Stacey understands the complexity of the performance challenges ahead and the expectation we all have for this team. The incoming coach will be charged with unlocking the extraordinary ability of this team and we're confident that Stacey’s people-first approach, technical capability and drive for success will do just that."

Like many sports, the calendar for netball is a work in progress and the Diamonds don't have a fixed date for their next appearance. Talks continue about a four-match Constellation Cup series with New Zealand.

Opinion: US Soccer had no choice but to change its rule on kneeling during national anthem