Home » Sport » ‘We are excluded’: Frustration as 18 boats barred from winning handicap honours

Entrants competing in a new division of the Sydney to Hobart yacht race have been left disappointed after organisers declared two-handed boats be part of the race but ineligible to take out the Tattersall Cup for overall handicap honours.

This year’s race will see 18 pairs compete in the inaugural two-handed division, in which boats are crewed by just two people.

The move comes after a recent boom in popularity for the yachts which has been attributed to COVID-19. With just two crew members required, the division means fewer hands-on-deck and less risk of spreading the virus.

The division has become so popular in recent years it will feature at the Olympics in Paris 2024.

But traditionalist sailors in the Sydney to Hobart race have pushed back on the introduction of the boats into the event, arguing the use of autopilot systems, which are fitted to the boats and replace a human helm, should not be included in the historic event.

Race organisers are yet to determine how to correctly factor in the autopilots to the handicap system and have therefore ruled the boats ineligible from winning the race’s overall handicap prize, the Tattersall Cup.

The two-handed fleet will instead challenge for an inaugural trophy, awarded to the overall winner out of the 18 boats. The total fleet of this year’s fleet stands at 94 boats.

A committee has now been put together by the organisers of the race, the Cruising Yacht Club of Australia, to resolve the issue in time for next year’s race.

Peter Franki, who will sail alongside co-skipper Drew Jones in the boat Salt Shaker, said he couldn’t understand why the boats had been barred from competing for the overall prize.

Franki said he was unimpressed after finding out about the organiser’s decision to exclude the two-handed boats. 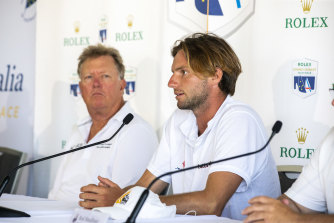 Shorthanded skippers Peter Franki (left) and Lincoln Dews both feel the new division should be embraced by the race. Credit:CYCA/Andrea Francolini

“I was disappointed and surprised,” Franki said. “We have a handicap, the same as everyone else, but we are excluded. We are rated under the same system as many other boats vying for the Tattersall Cup.”

Franki said the club needed to keep up with the times with many overseas races already allowing two-handed boats to compete on the international stage.

“It’s a new field for the sport in Australia [but] it’s permitted overseas, so I think it’s just new and hard for the club to adapt to this new field,” he said.

Skipper Lincoln Dews won the 2014 race on Wild Rose, and will sail Hells Bells with Andrew Scott this year, said the division was an exciting form of racing for the event to embrace.

“The boat speeds are so close. There are so many opportunities to make mistakes. To gain places over four days there is going to be some really exciting and close racing,” he said.

Commodore of the CYCA Noel Cornish said he understood the frustrations of crew members within the two-handed division but said the organisers wanted to get the handicap right.

“We just need to be cautious in some areas. We don’t believe we fully understand [the difference] at the moment both between two hands yachts and a full crewed fleet,” he said.

“There is a tremendous amount of history attached to [the Tattersall Cup]. As we’ve embraced two-handed, and we’ve gone as far as we possibly can. Apart from this handicapping issue, we are hoping there will be a resolution to that one way or another going forward.”

Sports news, results and expert commentary. Sign up for our Sport newsletter.

Greg Johnson, who played for Nashville Predators and three other NHL teams, dies at 48