Home » Sport » Vixens head to Perth, promising to be better

Coach Simone McKinnis welcomes the growing buzz around the unbeaten Melbourne Vixens, as a team yet to win a final in the first two Super Netball seasons is hailed as the early title favourite for 2019.

“Within the team, that’s what we want: we want a premiership, and we mightn’t talk premiership each week, but that’s what we’re pushing for,’’ said McKinnis, the former Diamonds great and 2014 ANZ Championship-winning coach.

“It’s only three rounds in, though, we’ve played three teams, there’s a long way to go. So we’re happy for people to talk in those terms, but our job is just to be putting it out there on court to show that we’re fair dinkum each week.’’

Their next assignment: the annual trip to Perth, where the Vixens’ 2018 campaign effectively ended with a disastrous round-13 loss in McKinnis’ 100th game as coach.

As key defender Emily Mannix finally returned from a broken finger, star goaler Mwai Kumwenda ruptured her ACL, and a makeshift shooting end was left needing to conjure a victory and three-bonus-points-plus-percentage haul in the final round against the surging Sunshine Coast Lightning to pinch a top-four spot.

But the damage had been done. Literally.

“That was not a good round for us (in Perth) last year. Yeah, we remember it clearly,’’ says McKinnis, wryly. “Even Kate [Moloney] said the other day ‘I promise it’ll be better this time’, because it was my 100th game, and I was thinking ‘well, we’ve had 99 better games than that one’.

“It ended our season in some ways, and with the injury to ‘MJ’ (Kumwenda), that was probably one of the toughest road trips that we’ve had. But we’ve been over there in the pre-season, and we’re ready and looking forward to it.’’

Certainly, it has been an exceptional start, the Vixens having beaten 2018 finalists the Firebirds and Giants by an average of 14 goals, as well as the improved Thunderbirds by 16, and collected 11 of 12 available bonus points in losing only the opening quarter of round one.

While still no fan of the bonus-point system, McKinnis is nevertheless confident that her team has better grasped the necessity of working within it. Even when a match appears won, there can be no easing off.

The exacting coach says she is “generally happy’’ ahead of round four. “I think we have made subtle improvements across the three games. One of the things that let us down last year was that consistency, so our ability to win quarters and maintain standards across the quarter is improving, but I still think there’s a way to go.’’ 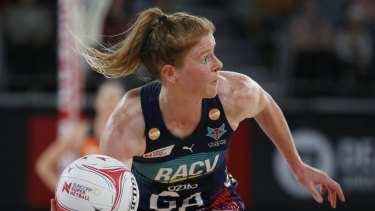 Tegan Philip’s partnership with Caitlin Thwaites has been working for the Vixens.Credit:AAP

The defence, including Diamonds’ hopefuls Jo Weston and Mannix, has been outstanding, with captain Moloney also pressing her selection claims in tandem with World Cup certainty Lizzie Watson in the midcourt.

And in a league dominated by tall, holding shooters – often with foreign passports, and a low-scoring feeder out the front – the Vixens’ share-the-load duo of Tegan Philip and recruit Caitlin Thwaites is an endorsement for the style of moving circle that McKinnis has always preferred.

“What makes a more mobile circle work is the ability and ball skills of those that are passing in,’’ she says. “So Caitlin and Tegan have really got the smarts and are working together, but they’ve also got those out in front with the ability to feed that style of play, because that’s not an easy thing.

“It is a nice combination, and it is always good to have that balance of shooters. Tegan is maintaining that workrate out the front which is so important to us, and Caitlin is so solid, she’s such a strong athlete, she can be so intimidating, and just her smarts, her knowledge and experience have been great for us.’’

As for the Fever, last year's runners-up have been leaking goals – 80 in consecutive weeks – after losing captain and goal keeper Courtney Bruce to an elbow injury that will sideline her again on Saturday.

“There was a lot of goals scored against them, but in terms of their general play, it was certainly improved last week,’’ McKinnis said. “And they’re a team after three losses that would be fighting hard to turn that around. They’re on their home court and they’re not going to be taking any backwards steps on anything.’’

Who is Iceland vs Croatia ref Antonio Mateu Lahoz and how many World Cups has he officiated at?

Olympics should be cancelled amid coronavirus outbreak, Trump suggests