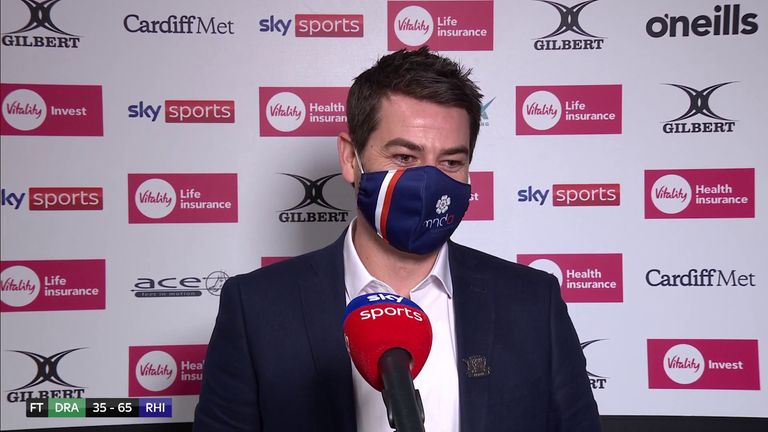 Leeds Rhinos began life as a netball franchise with a dominant victory over Celtic Dragons as the 2021 Vitality Superleague season got underway in Wakefield, with champions Manchester Thunder also starting in style.

Rhinos are the newest team in the Superleague, but they fired an early warning sign that they are likely to be dangerous opponents as they ran out 65-35 winners over an out-of-sorts Dragons who failed to get going.

Thunder were slower out of the traps than their Lancashire rivals, but after surprisingly trailing to Strathclyde Sirens after the opening quarter, they bossed the rest of the match to chalk up a 53-36 win.

A bumper start to the season continues on Saturday with three more games to complete Round One, and then more live action on Sunday and Monday – and you can watch all of the action unfold via the Sky Sports YouTube channel.

Amy Carter nailing the feed in attack and Kerry Almond looking like she's never been away in defence. @thundernetball 👏

Vitality Superleague – Round One fixtures & results

Rhinos charge past Dragons to start in style

Life in the Superleague started fast for the Rhinos as they flew out of the traps to lead early – an advantage they never relinquished against the Dragons as they claimed a deserved and comfortable victory in their first official game as a franchise.

With former basketball prodigy Donnell Wallam leading from the front, Rhinos raced into a 12-4 lead against a shellshocked Dragons, who made the 220-mile journey from Cardiff to the purpose-built court at Production Park in Wakefield.

They maintained their eight-goal lead through to the end of the first quarter, Rhea Dixon adding a touch of flair from the goal-attack position and England’s most capped player Jade Clarke stamping her authority on the game from the centre position.

In contrast to the Dragons’ journey, Leeds made the short trip across Yorkshire for their Superleague bow and with the experienced defensive end of Fi Toner, Vicky Oyesola and Tuaine Keenan making life difficult for Rebekah Robinson to lay the platform for Rhinos to continue pulling clear.

Player of the Match – Jade Clarke

The experienced Jade Clarke made her debut for the Rhinos and was pivotal throughout as she laid the foundations for the attacking intent while ensuring the defensive end had bags of support. 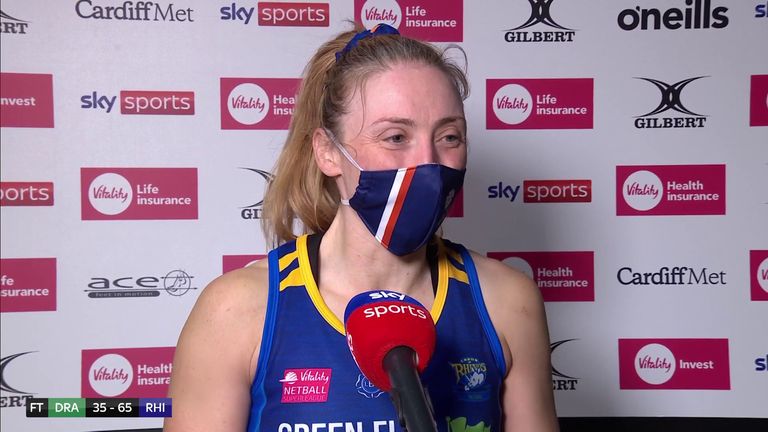 Rhinos were 12 goals clear at half-time and as is so often the case, the stronger team used the third quarter to pull clear – conceding just six goals in an impressive third quarter that underlined their authority.

Aussie shooter Wallam continued to enjoy an impressive start to life in the Superleague and with a 49-23 lead at the end of the third quarter, Dan Ryan turned to some of the Rhinos talented youngsters.

Both teams will be back for a second time over the weekend, Dragons face a less than 24-hour turnaround when they face Team Bath on Saturday, while Rhinos take on Saracens Mavericks in a mouthwatering-looking contest on Monday night.

Rhinos finished with a flourish, wrapping up a dominant 30-goal victory with valuable court time for youngsters Sienna Rushton, Rosie Harris and Emily Hollingworth while there is much to ponder for Dragons’ Tania Hoffman.

Manchester Thunder are the champions desperate to retain their title, and they battled back from a slow start to pick up where they left off during the truncated 2020 season.

Thunder had started fast with four wins from four games before the season was cancelled amid the coronavirus pandemic, but it was Sirens who seized the early initiative.

An early turnover allowed Sirens to forge a two-goal lead and with uncharacteristic mistakes hampering the Thunder cause, it was Sirens who took the early credit.

Beth Goodwin in attack and new recruit Towera Vinkhumbo in defence gave the Scottish franchise plenty to be pleased with during an impressive first quarter of the season. Lynsey Gallagher moved them three goals clear and it was four by the end of the opening 12 minutes.

Trailing 12-8, Thunder made changes as Laura Malcolm moved to centre and Caroline O’Hanlon to wing defence and a fast start to the quarter saw them stem the Sirens flow and fight back to level the contest at 16-16 and then hit the front.

Karen Greig’s team did not look back from that moment, closing out the first half with a 23-19 lead as Eleanor Cardwell, who enjoyed an impressive Legends Series for England, began to find the goal with increasing regularity.

Player of the Match – Laura Malcolm

Having turned a four-goal deficit into a four-goal advantage, Thunder introduced Kerry Almond into the goal keeper bib, just days after she came out of retirement to replace the injured Loreen Ngwire.

The result was a dominant defensive end in a low scoring third quarter which Thunder edged 10-7 to pull further clear and allow Greig to bring on some of the franchise’s talented youngsters for the final quarter.

The impressive Lois Pearson was one of those, she teamed up with Cardwell to help Thunder take their lead into double figures. With games coming thick and fast, both teams rotated their squad through the closing stages, Thunder eventually closing out a victory with plenty of room for improvement before they return next week.

Sirens can take great heart from making the champions work for a victory and put themselves in fine position to take on Severn Stars on Saturday.

Sky Sports is your home of netball. The Vitality Netball Superleague returns on Friday at 4.45pm on Sky Sports Mix, with a 10-match weekend. Every contest will be available to watch across Sky Sports, the Sky Sports YouTube channel or England Netball’s YouTube channel.

Remember Tae Bo? It’s now a quarantine kickstart while working out from home