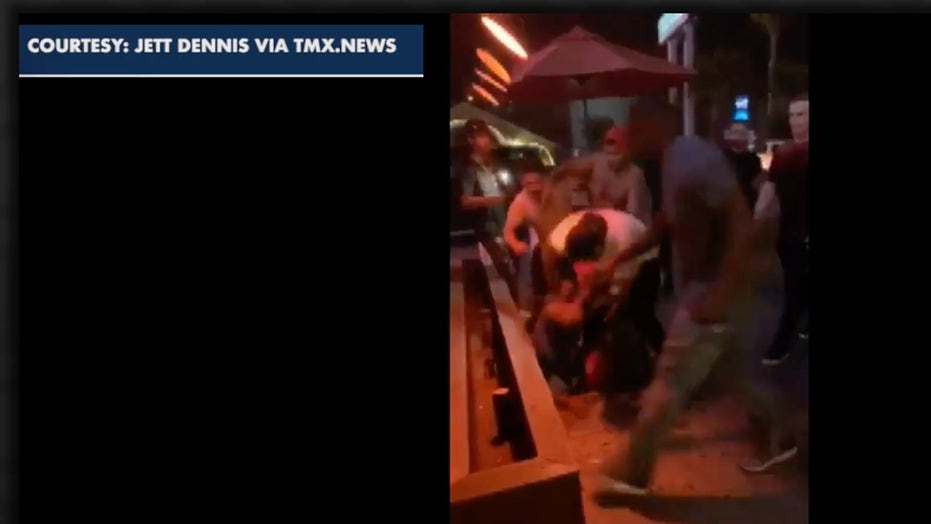 The 32-year-old outfielder is recovering from surgery after police say he was stabbed in the lower back when an argument broke out outside the club Sunday night.

New video surfaced Wednesday showing the moments after San Diego Padres outfielder Tommy Pham was stabbed in the lower back when a fight broke out in the parking lot of a gentlemen’s club Sunday night.

The video shows a large crowd gathering in the parking lot of Pacers Showgirls International in San Diego at around 10:30 p.m. Sunday. A fight ensues between two men and several bystanders attempt to break it up.

At one point a man in a white shirt and red pants, later identified as Pham, walks in the view of the camera. His lower back is visibly bloody.

Pham continues to walk around before grabbing at his lower back – realizing the extent of his injuries. He is later seen on the ground as officers appear to apply pressure to his wound.

The 32-year-old outfielder was taken off the scene on a stretcher.

Police told The San Diego Union-Tribune the incident began when Pham was leaving the club and saw an argument happening near where he parked his car. Two people familiar with the situation told officers that he was attacked after asking the people involved in the argument to get away from his vehicle.

Law enforcement said Pham did not know his attackers. No arrests had been made as of Wednesday, NBC San Diego reported.

Pham, 32, was traded to the Padres last year after six seasons with the Tampa Bay Rays and St. Louis Cardinals.

He hit .211 this year with three home runs, 12 RBIs, and six stolen bases in 31 games, then batted .375 (9 for 24) in six postseason games before San Diego was eliminated by the Los Angeles Dodgers on Thursday

Listen to Episode 6 of ‘Blue Rush’: Battle for the Swamps feat. Linda Cohn