And there was only one person to lead the charge, Dame Sarah Storey making history as she became Britain’s greatest Paralympic athlete of all time with a 17th career gold delivered with trademark grit and determination.

And then Benjamin Watson won the equivalent men’s race ahead of teammate Fin Graham, fellow Briton Jaco van Gass narrowly missing out on making it a podium sweep.

Storey, who made her debut as a swimmer at the 1996 Games in Atlanta, would have felt right at home on arrival at the Fuji Speedway, skies were leaden, rain torrential and the temperature, well it was positively chilly.

Indeed it’s due to be warmer back home in the Peak District, where husband Barney was watching with children Louisa, eight, and Charlie, four, who starts school tomorrow. When the time comes, Charlie is going to trump his classmates at ‘show and tell’ – mum’s medals being the ultimate playground accessory.

But after a pursuit win at the velodrome and the time trial on the road, this was no procession, a lesson to those who had pre-written a seemingly familiar story, Storey not experiencing defeat at the Games since 2004.

Germany’s Kerstin Brachtendorf, six years Storey’s senior, had threatened to blow the race wide open as she stormed clear of her rivals, her advantage 75 seconds with just over 26km to go Storey – confident the German would pay for her early endeavours – worked hard to close the distance in a small and committed chase group behind that included teammate Lane-Wright.

With cornering treacherous, it was hard to force the pace but eventually it was clear no one was going to stop this bid for sporting history.

Brachtendorf was overhauled and Storey and her teammate powered clear, words were exchanged and gold and silver duly banked, with the order they finished never really in doubt. 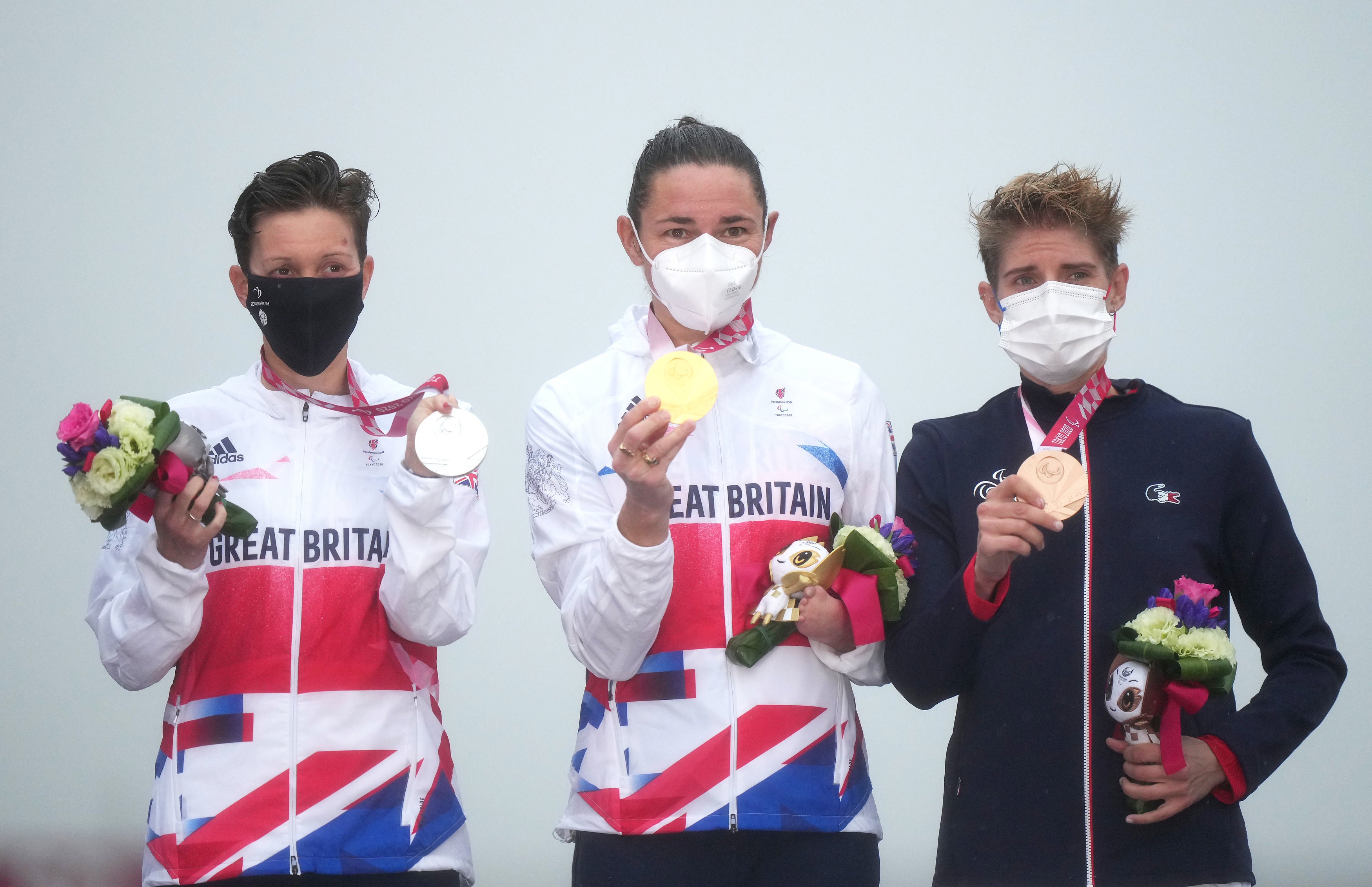 “Back in Atlanta I couldn’t have imagined going to eight Games, let alone winning medals at every Games, and 17 of those medals being gold,” said Storey.

“It’s the dream I didn’t think would come true, I just wanted to be a British athlete and I wanted to compete for my country for as long as I possibly could. To still be going strong in Games number eight is truly amazing.

“I never felt a weight on my shoulders. It is the sweetest feeling to know that I go back to my room and there’s a couple of gold medals in the safe to put this one with.”

Storey became Great Britain’s most successful woman Paralympian in Rio, overtaking the record of close friend Dame Tanni Grey-Thompson. This victory means she overhauls the tally of swimmer Mike Kenny, who won 16 golds between 1976 and 1988.

Lane-Wright confirmed this would be her last Games, after three silvers here in Tokyo to add to her one from Rio, all behind Storey. There were no team orders, though Lane-Wright should share a little of this golden glow, having worked so hard to close the gap.

“We knew we had to time it right because if you go too hard too early, you’re burning all your matches,” added Storey. “Crystal came through on the penultimate climb to make sure we closed that gap, and then it was just down to me. I didn’t touch my breaks and I just went for it.”

You have to feel for Lane-Wright, continually second best in the world and second best in Britain, but she insists there are no regrets, she leaves the sport more than happy with her achievements.

“When Sarah and I got away I told her it was her gold medal. I said: ‘You don’t have to worry, I’m not even going to attempt to take it away from you,’” she said.

“This is part of history now and I didn’t have the legs, she went so hard. It’s easy for me to now say I gave it to her, but she won that fair and square.

“Gold medals aren’t the only thing that define it, you also have to look at her as a professional. Even if she’d won silver today, she is still one of the greatest athletes we will ever have.

“I’ve piggy-backed on that because I’m in the same category and now on the same podium. There are times when I think: ‘What would Sarah do?’ She inspires me that much.”

There was also a British one-two in the men’s C4-5 road race, Benjamin Watson leading home teammate Fin Graham, with Jaco van Gass just missing out on a podium sweep in fourth. 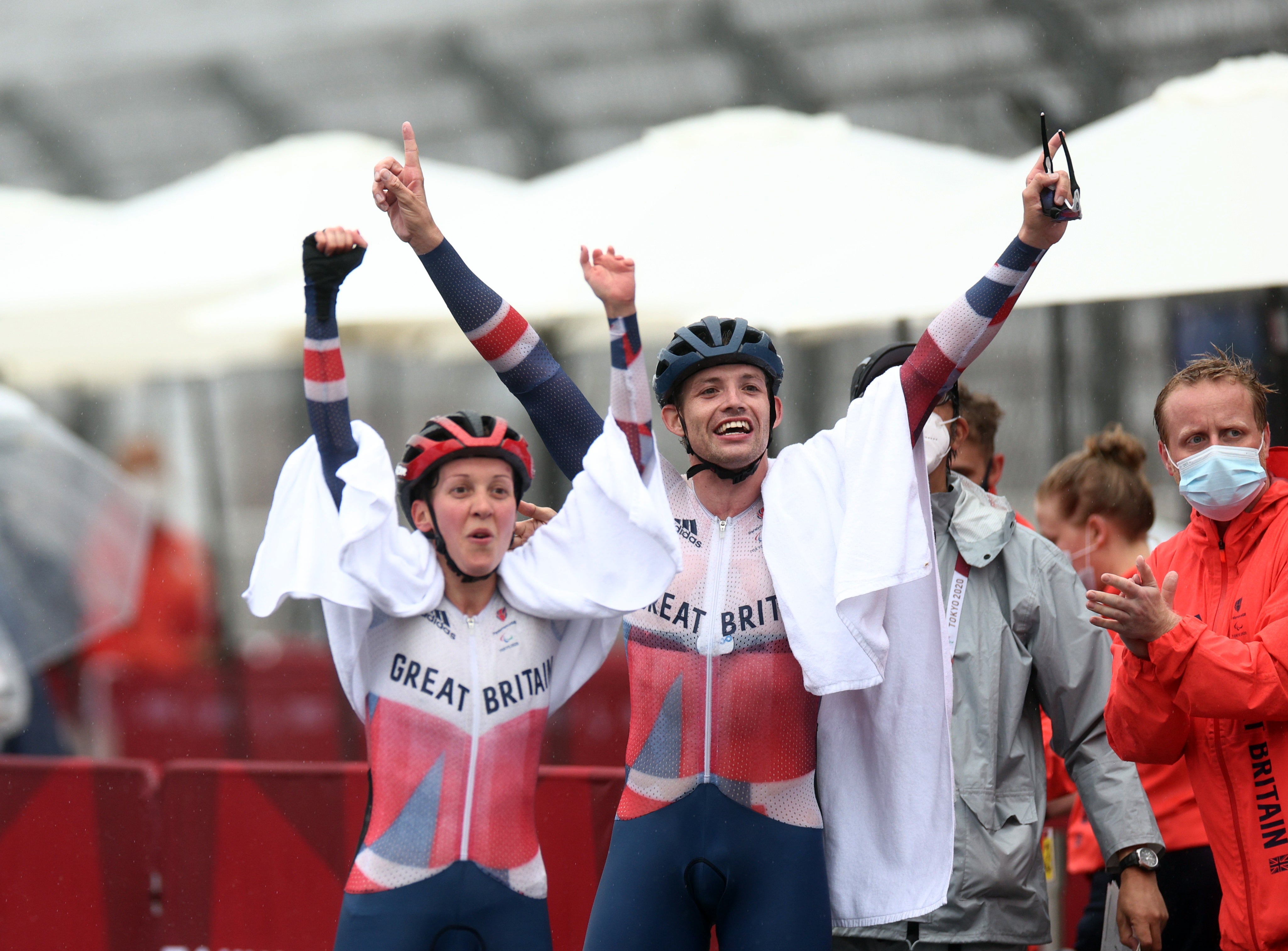 Storey’s tale is familiar but Watson’s is equally remarkable, a double gold medalist here just five years after first climbing on a bike

“The reason I’m here is when I was 14 I caught Guillain-Barre Syndrome, which is a neurological disorder,” he said.

“I went very quickly from being able to run and walk and stuff to being paralysed in hospital.

“It’s quite rare and I had the really rare type. It probably took me 10 years to get over it and accept I’d got a disability and that’s why I got into this late – because I was working and doing stuff.

“Cycling has been a huge changer. The illness has been a huge life-changer, too, but it makes you a stronger person. It helps in a situation like this. You can put it all out.”

Sainsbury’s is a proud supporter of ParalympicsGB and a champion of inclusive sport for all. Sainsbury’s commitment to helping customers to eat better has been at the heart of what we do since 1869. For more information on Sainsbury’s visit www.sainsburys.co.uk/ and https://paralympics.org.uk/