Home » Sport » ‘The only event I’ve ever wanted to win’: Wright rules supreme at Bells Beach

Australian surfing sensation Tyler Wright is a Bells Beach champion after a dominant performance in the final on Sunday to defeat five-time world champion Carissa Moore.

Wright, 28, was lifted onto the shoulders of her brothers, Owen and Mikey, and carried through the crowd following the win, as she first-pumped her first title at Bells.

“Honestly, this a dream come true,” Wright said in the immediate aftermath. 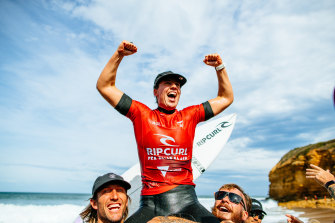 “There have been so many times I’ve wanted to give up on getting back to this sort of form. It’s taken all of me and I really feel that right now. It’s unbelievable.“

Wright reached the top of her sport in 2016 when she claimed her first world championship, and backed that up to win her second in 2017, before being struck down with chronic fatigue syndrome in 2018.

Sunday’s Rip Curl Pro victory was her first title on the World Surf League tour since the Maui Pro at Pipeline in 2021.

“I cannot put into words what this means,” she said.

“It’s more than a win. It’s the only event I’ve ever wanted to win. I’m over the moon, I’m stoked.

“Two years being out is a long time. That fire that kind of got snuffed out by illness has been re-lit.

Moore, who defeated the world No.1 Brisa Hennessy in the semi-finals on Sunday morning, had beaten Wright seven times from nine finals match ups.

But Wright had won their two most recent encounters and posted huge numbers in Sunday’s decider to give Moore little chance of claiming her fourth Bells title.

WWE launch FREE version of network with 15,000 shows including SmackDown and Monday Night RAW – The Sun