When a giant asteroid hits the earth and wipes out life, the members of the International Olympic Committee will still be here, gathered like Illuminati in their impregnable bunker, counting the gold from their last broadcast deal and planning the next Games ‘for the athletes’.

The IOC forges ahead with the summer games in Tokyo, now just 69 sleeps away. It has moved into what it calls ‘implementation mode’, which sounds like the stage of a rocket launch when the machines have taken over and the humans no longer have a say. Japan certainly doesn’t. Its prime minister, Yoshihide Suga, admitted just this week that even if the COVID-19 pandemic worsens in his country, it is the IOC that has the final say on the Games going ahead. He knows who’s boss. 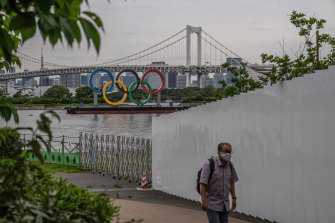 Published polls in Japan show an average of 72 per cent of people are against hosting the Games.Credit:Getty

Once it is determined that the Games will go ahead, the residual question is should they? It’s totally back-to-front, but here’s where it gets interesting, because the global community is split in a way it hasn’t been since the political boycotts of the 1970s and 1980s.

Among the athletes – the IOC, whatever its image, can’t be accused of being out of alignment with the athletes – only a bare minority are withdrawing. There will be risk, there will be compromised competition, there will be scant atmosphere, there will be no family, and there will be an asterisk against some results due to lapses in drug testing over the past year. But for all that, the Olympics are the Olympics, and athletes are trained to overcome adversity. If you have dedicated four – make it five – years to this event, you would be thankful for the IOC’s iron will.

Among the governments of some 200 competing nations, there is much unease but no tangible boycott threat. Eleven to fifteen thousand competitors and officials will descend on Tokyo in July, many unvaccinated, all armed with contingency plans and crossed fingers. Australia remains passively compliant, which is out of character, but everyone becomes a bit that way in the face of the IOC. Is this because there surely can’t be a fifth wave in Japan (duh…) or because (um…) it’s the Olympics?

Japanese public opinion has swung against hosting the Games. Published polls have found an average 72 per cent of Japanese oppose it. An online petition calling on the cancellation of the game this week gathered 300,000 signatures in three hours. Japan’s opposition leader has called Games-over: “I think it is possible that the measures our nation takes to protect human life and livelihoods simply will not make it possible to hold the Olympics,” Yukio Edano, head of the Constitutional Democratic Party of Japan, said on Sunday.

If the economic cost were a prohibitive problem, nobody would host the Olympics. This time there is an unknown human cost.

Part of the anti-Olympics mood derives from Japan’s realisation that the Games will cost some $US15 billion ($19.4b) more than budget. Nobody really has a clue how much Olympics cost the host country, but a recent Oxford University report estimated the average cost overrun on all summer Olympics was 213 per cent and rising. For the 2016 Rio games, the blowout was 352 per cent. The financial pain left Brazil extra-vulnerable to the subsequent health catastrophe. Influential Washington Post columnist Sally Jenkins wrote this week, ‘Japan’s leaders should tell the IOC to go find another duchy to plunder… The Olympics always cost irrational sums — and they lead to irrational decisions. And it’s an irrational decision to host an international mega-event amid a global pandemic.‘

But if the economic cost were a prohibitive problem, nobody would host the Olympics. This time there is an unknown human cost. The Japanese Health Minister, Norihisa Tamura, has told the IOC that it must prepare its own hospital contingencies for Olympic athletes because it won’t be permitted to take any beds from Japanese patients. He can’t have read the small print in the Olympic host contract, which binds Japan to providing medical services, including exclusive hospital beds, to the games. Some 10,000 Japanese medical workers are being reassigned to do exactly what the country’s own health minister has said they wouldn’t. IOC rules, OK?

Beyond the debate over practicalities, there is a question about the human decency of holding the games. Japan’s world No.1 tennis player, Naomi Osaka, said this week, “Of course I would say I want the Olympics to happen, because I’m an athlete and that’s sort of what I’ve been waiting for my entire life. But I think that there’s so much important stuff going on, and especially the past year, I think a lot of unexpected things have happened and if it’s putting people at risk, and if it’s making people very uncomfortable, then it definitely should be a discussion.′ Translated from Osaka-speak to, say, Tomic-tongue, this is the equivalent of a smashed racquet, a flattened line judge and the screech of a departing Maserati.

Is the IOC really that bull-headed? At a virtual press conference on Wednesday, the IOC reasserted its confidence in staging the games even as its own president, Thomas Bach, cancelled a trip to Tokyo. A protester interrupted the conference with a ‘No to Olympics’ banner, but Bach’s actions spoke more loudly than the intruder’s words.

One year ago, before the postponement of the 2020 Games, one of the IOC’s own members, Canadian Hayley Wickenheiser, criticised the movement for failing to recognise that ‘the pandemic is bigger than the Olympics’. Since then, 3 million people have died from the pandemic. The Olympic movement still thinks it is bigger.

It’s a spectacular, historic punt – in an unprecedented way, truly the greatest show on earth. Should the Games go ahead? The IOC is banking on shoving the ‘should’ question into the land of Afterpay. The ‘should’ question will become a ‘should have’ question judged after the event. For all their anxiety before things happen, people tend to be very generous and forgiving afterwards, so long as it’s all worked out. The IOC is banking all its gold, and other people’s lives, on getting this one right. This singular organisation is saying that ordinary ideas of what is responsible and irresponsible do not apply to it. If it succeeds, the IOC will claim that these will have been the best games ever and, in a logic-defying way, they probably would be.