Furious Swimming Australia officials have threatened legal action against conservative activist group ­Advance after it hijacked images of some of its biggest stars in a campaign against transgender sport inclusion.

In a blitz against supposedly “woke” politicians, the group targeted independent member for Warringah Zali Steggall with moving billboards proclaiming “Women’s Sport is Not for Men”. Liberal candidate Katherine Deves is a hardliner on the issue and wants transitioned athletes banned from female sport.

The billboard featured images of Tokyo superstar Emma McKeon, four-time Olympic backstroker Emily Seebohm and swimming legend Dawn Fraser. All have questioned aspects of the complicated debate over the past week. But none had been consulted by Advance, and Swimming Australia did not give consent for the use of their imagery, some of which was used to promote their athletes ahead of the Tokyo Olympics.

SA chief executive Eugenie Buckley issued a swift statement saying its lawyers had already demanded the billboard be shelved. Buckley confirmed that permission had not been sought from either SA or its athletes and, even if it had, it would have been quickly denied.

“Swimming Australia strongly condemns the use of imagery of our athletes, past and present, by the Advance Australia party in recent political advertising,” Buckley said. 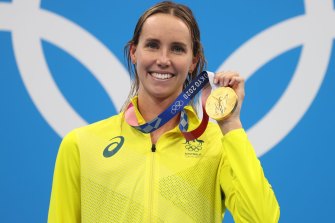 Emma McKeon with her 50m freestyle gold from Tokyo, one of a record seven medals she claimed in the Olympic pool.Credit:Al Bello/Getty Images

“Consent to use the imagery was never sought prior to its publication, neither from Swimming Australia nor the individuals involved. For clarity, if it was sought it, would have been categorically denied.

“Swimming Australia believes in a competitive environment that is inclusive, fair and equitable for all athletes at the same time. Ultimately, all Australians deserve to feel welcome, safe, valued and celebrated in swimming.”

McKeon and Seebohm have both contributed to the debate over the past week, both saying there needed to be fairness at the elite level when it comes to transgender athletes competing. Fraser, too, weighed in and suggested the creation of a separate category for transgender competitors.

But none have any alignment to Advance or conservative causes, and The Sydney Morning Herald understands Fraser is livid at the use of her likeness to back the cause. Seebohm, too, has sought to clarify her stance amid an election frenzy, saying she loved to share her sport and wanted “to see trans people live the lives they want”.

McKeon was up for an award at the Laureus World Sports Awards on Sunday night, where she was nominated for World Sportswoman of the Year. She would probably be mortified by the use of her comments as a political talking point after they were picked up at a forum hosted by Griffith University, where she trains on the Gold Coast.

Swimming Australia is continuing work on its own transgender policy but has made it clear that it supports inclusion. In late 2020, it partnered with Pride in Sport to increase LGBTQ participation in the sport.

Much of the debate has been spurred by American swimmer Lia Thomas, a transitioned athlete who had success at the NCAA Championships, and UK cyclist Emily Bridges, who was barred from competing at the last moment when world cycling went back to the drawing board on its transgender guidelines.

News, results and expert analysis from the weekend of sport sent every Monday. Sign up for our Sport newsletter.