England’s James Maddison earned a point for Leicester in this topsy-turvy seaside battle in Southampton.

The Saints twice took the lead through Jan Bednarek and Che Adams only to be clawed back by Jonny Evans and Maddison. 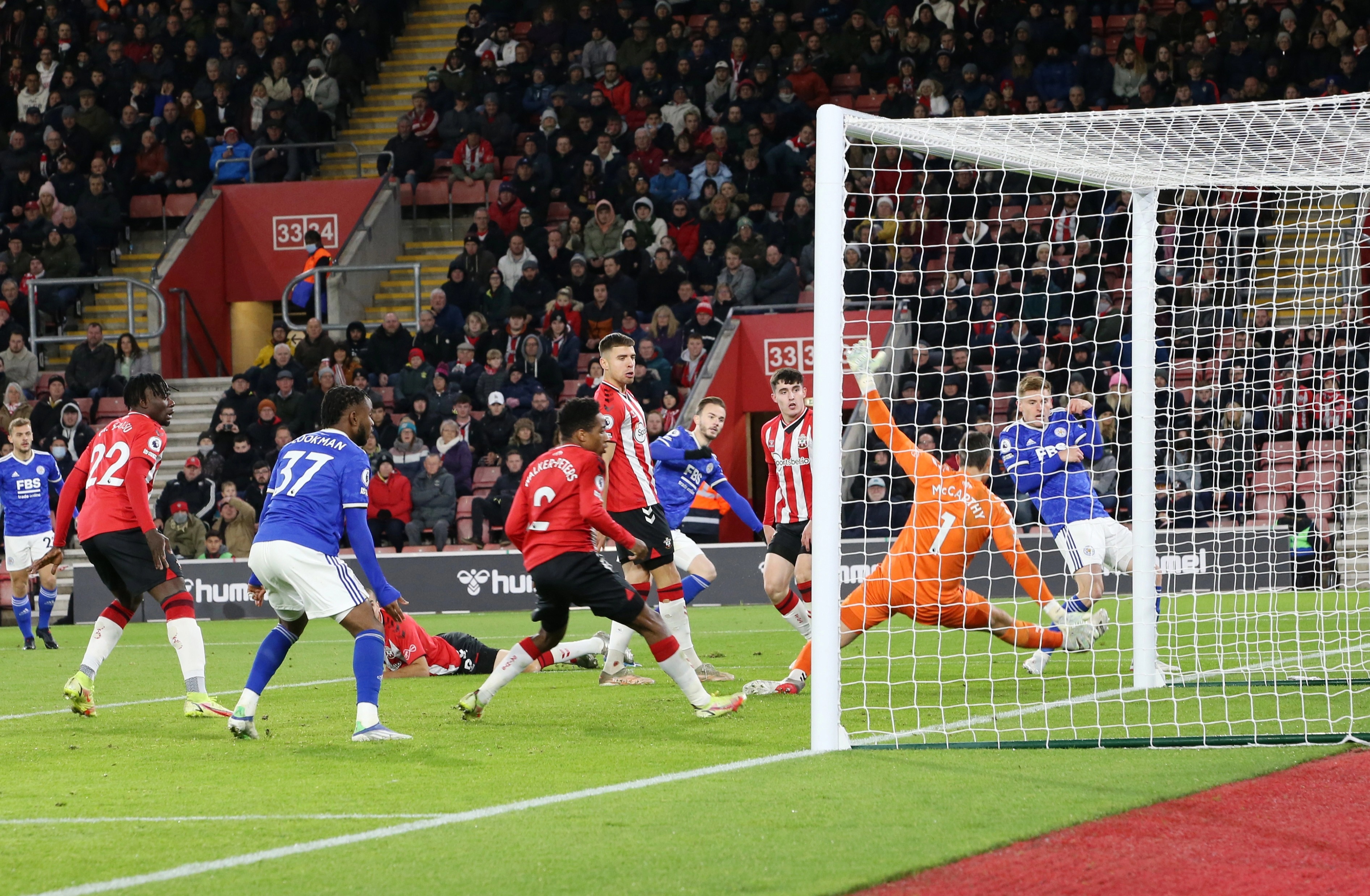 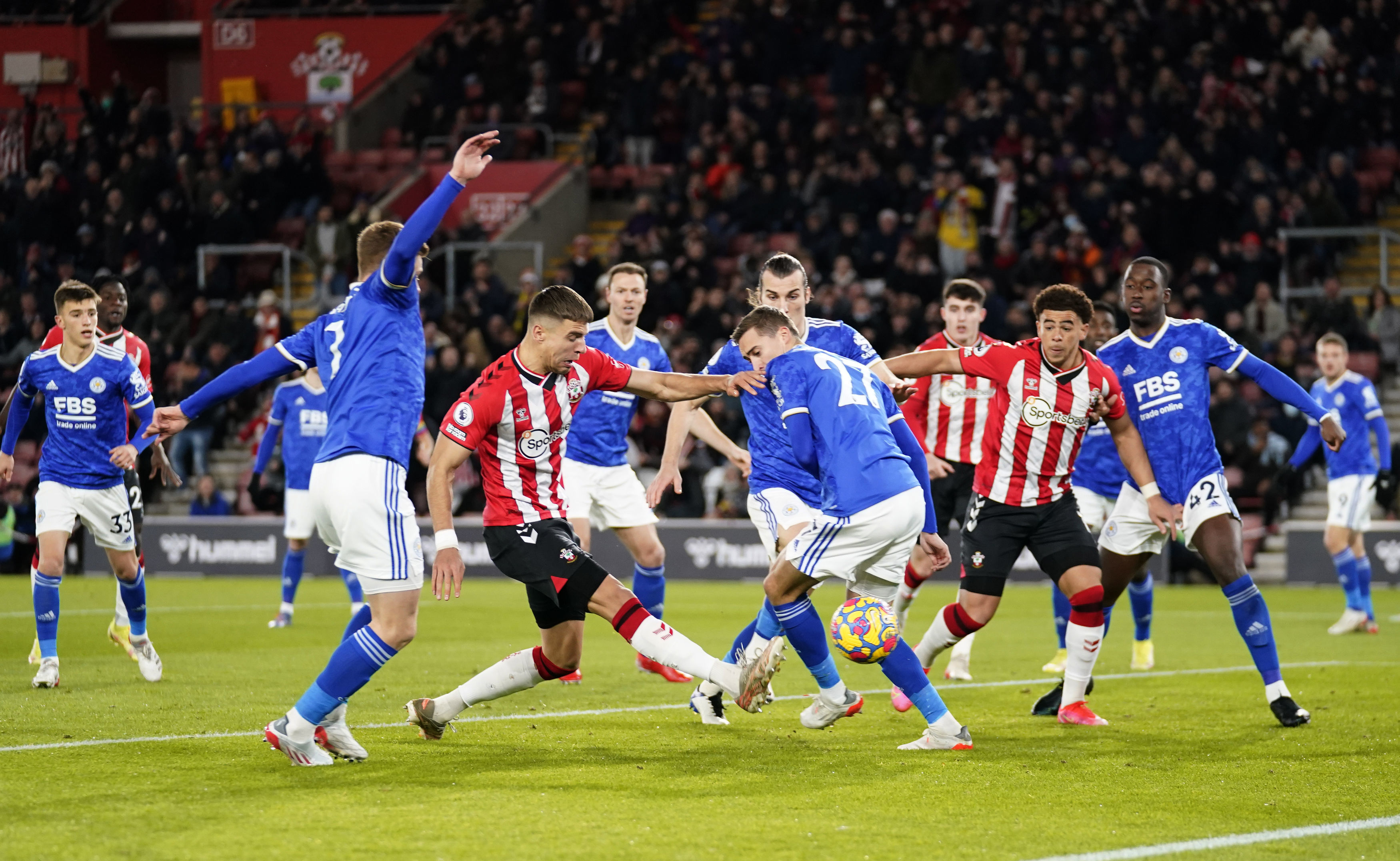 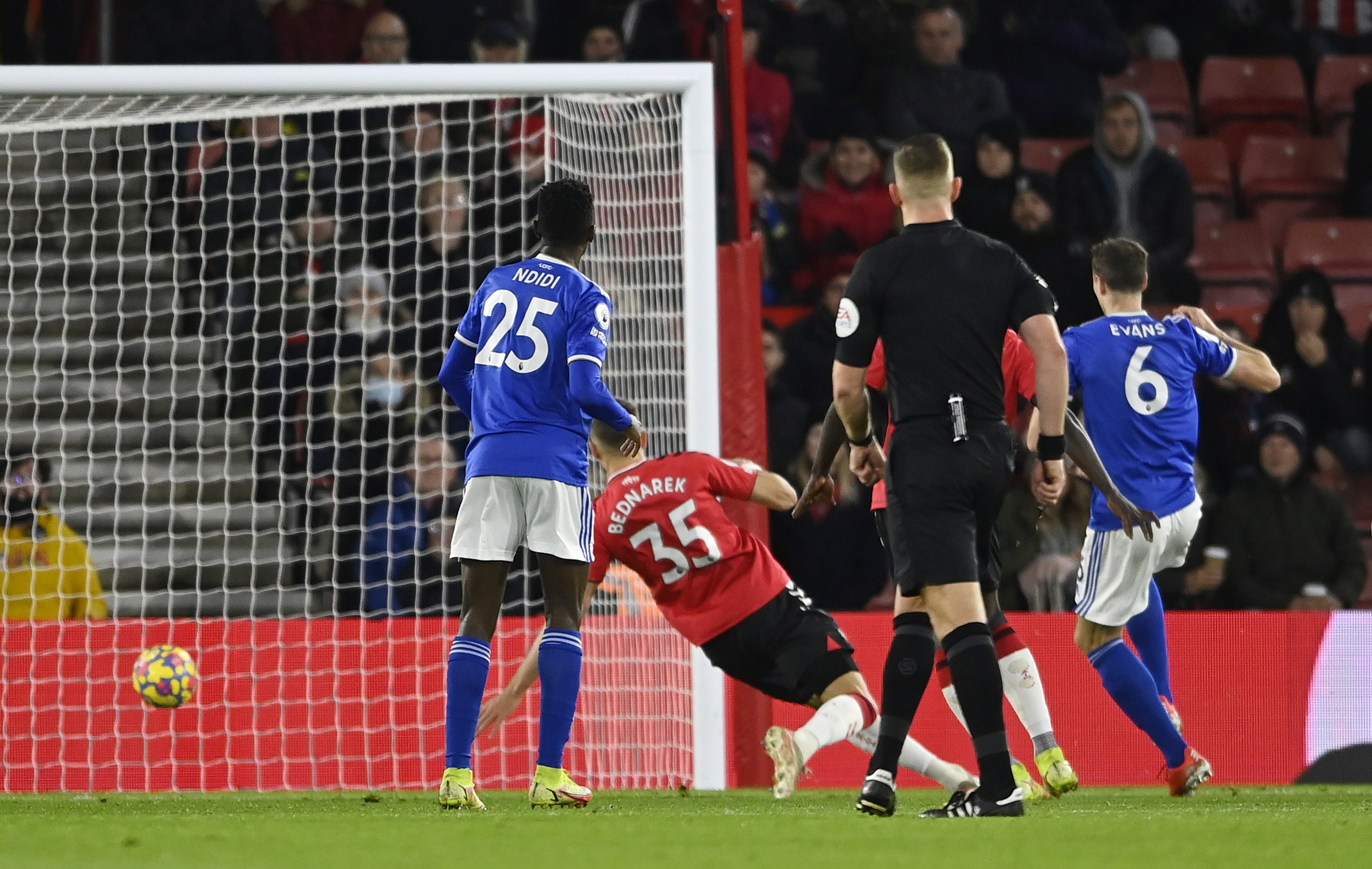 Bednarek gave the home the side the lead after just 150 seconds following a short corner routine between James Ward-Prowse and Nathan Teila.

And there was The Polish defender on hand to slam home his fourth goal-all at St Mary’s-past the helpless Danish stopper.

No wonder Saints boss Ralph Hasenhuttl leapt with joy having just suffered two away defeats at Norwich and Liverpool.

But he must also have feared the worse because in the three previous games Bednarek netted his boys went on to lose 3-2.

And Evans got the home nerves jangling again when he equalised on 21 minutes after Wilfred Ndidi’s shot was parried into his path by home goalkeeper Alex MCarthy. 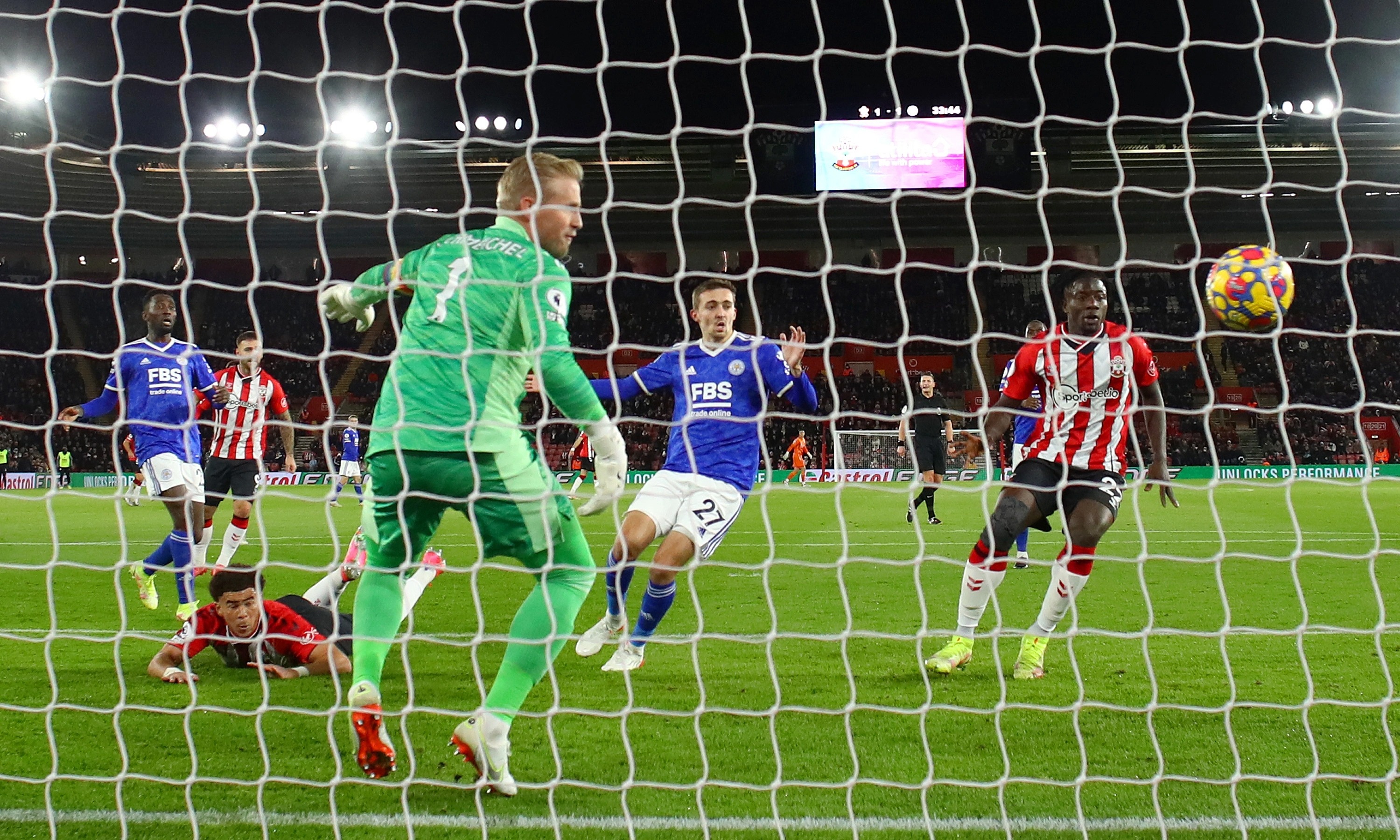 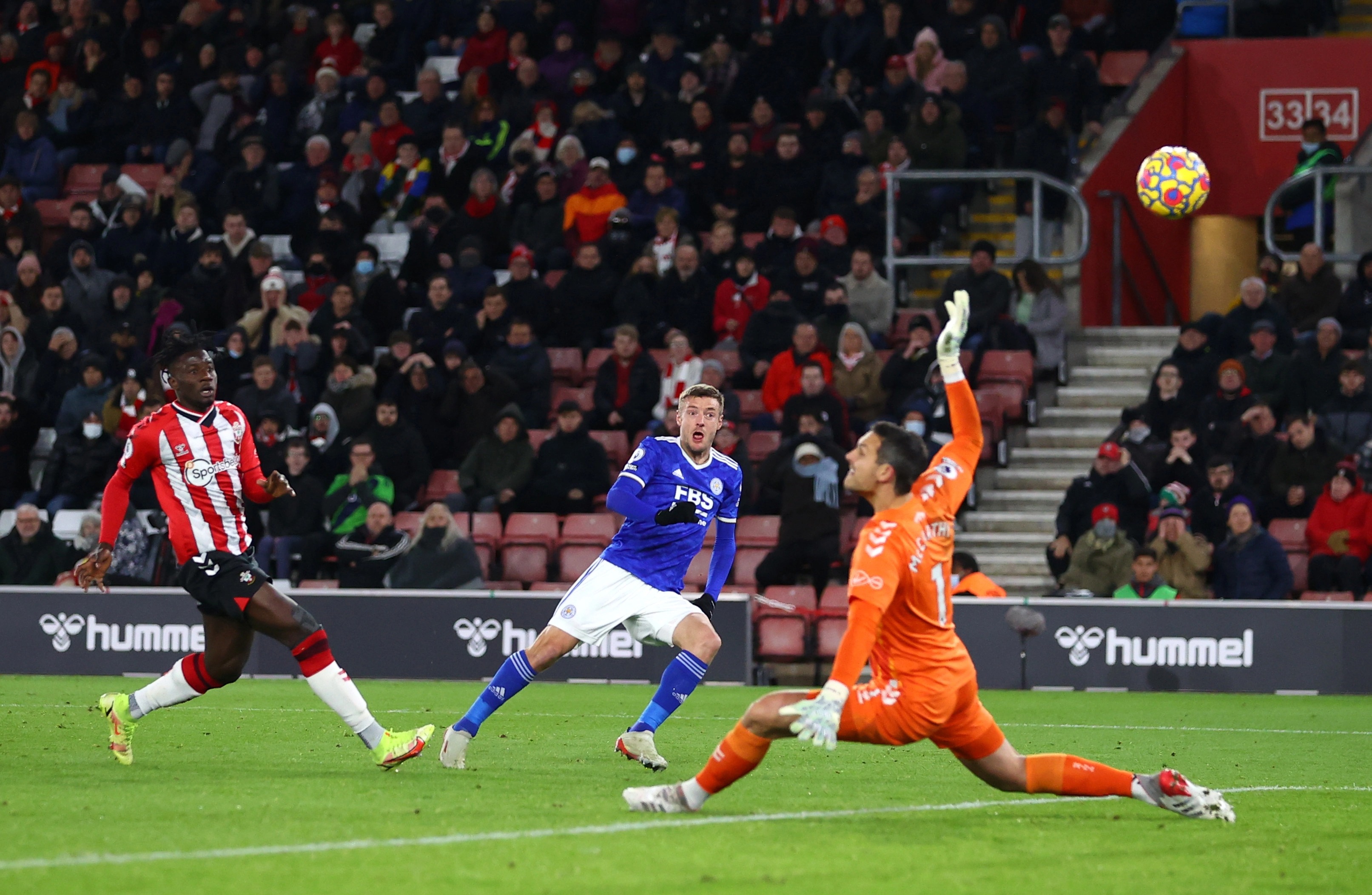 It was the Northern Ireland defender’s first goal since he scored in last season’s  1-1 draw at St. Mary’s.

If Schmeichel was unhappy at failing to stop Southampton’s first goal he was besides himself when the home side re-took the lead 13 minutes later.

The goalkeeper screamed out in anger when Adams was left all alone to net Nathan Redmond’s centre with a diving header.

This was not what the Foxes expected having won three of their last four games on the south coast scoring 16 goals in the process.

Two years ago they inflicted an embarrassing 9-0 defeat-the biggest away result in the history of top-flight English football-on the sorry Saints.

Yet they were not having it their own way with Southampton cutting open the City defence at ease before the break.

And Jamie Vardy, who has his own freezing Cryotherapy chamber at home for helping blood flow, was frozen out as he struggled to make his mark in the opening half.

This was the former England star’s first mid-week start of the season with manager Brendan Rodgers keeping the 34-year fresh for weekend league games.

The start of the second half was delayed for ten minutes because of a medical emergency in the stands.

Leicester caught the Saints off-guard four minutes after the re-start when Maddison turned Valentino Livramento inside out before slamming the ball inside the near post.

And only a fabulous save from McCarthy 20 minutes from time denied Harvey Barnes a spectacular winner.

Then Vardy raced clear with only McCarthy to beat but the nine-goal hit-man blazed his shot over the bar much to Hasenhuttl’s relief.