Fox News Flash top headlines for May 12 are here. Check out what’s clicking on Foxnews.com

SAN JOSE, Calif. – On a San Jose Sharks team filled with established stars, 22-year-old Timo Meier can get overlooked at times even though he scored 30 goals in the regular season.

Meier showed in Game 1 of the Western Conference final that he can be a force in his own right, scoring twice and setting up one of Logan Couture's two goals with a hard hit to send the Sharks to a 6-3 victory over the St. Louis Blues on Saturday night.

"He was a bull," Couture said. "When he skates and his strength, he's tough to defend. We're fortunate enough to play with him on our line, and I thought he was really, really good. Good stick, strong on pucks, you saw the talent on the one where he was able to walk around the d-man and finish. He's a really good player and he's coming into his own right now." 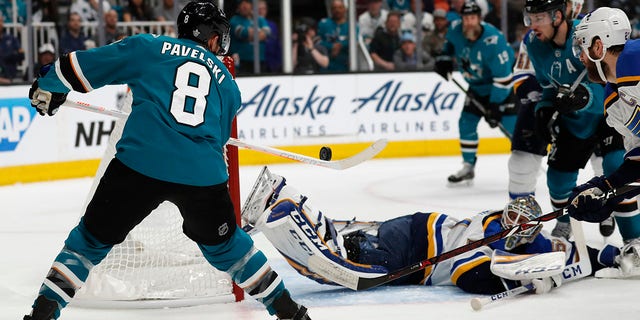 Meier's hit on Alex Pietrangelo led to Couture's goal that opened the scoring in the first period and he then scored twice in the second to give the Sharks a comfortable lead and their third straight Game 1 win this postseason.

Couture added an empty-net goal to give him an NHL-leading 11 in the postseason. Joe Pavelski and Kevin Labanc also scored for San Jose and Martin Jones made 28 saves.

"We have so many great guys on this team, so many players that are just unbelievable hockey players," Meier said. "It's fun to be able to play at this time of the year, and obviously have success, that's what I'm playing for. To win a Stanley Cup."

Game 2 is Monday night at the Shark Tank.

Joel Edmundson, Ryan O'Reilly and Tyler Bozak scored for the Blues but the team gave little help to rookie goalie Jordan Binnington to get off to a rough start in the conference final. Binnington made 19 saves but was left exposed by his defense on numerous occasions.

"There were a few too many mistakes out there," Edmundson said. "Whenever there was they capitalized on them. They really capitalized on every chance they got. That was the biggest difference of tonight's game."

This series is a matchup between two franchises seeking their first championships after years of playoff disappointments. They endured tough roads to get here with the Sharks needing to win a pair of seven-game series and the Blues needing a double-overtime win in Game 7 against Dallas to make it to their fourth conference final in the past 49 years.

The teams traded goals midway through the second period with Labanc converting after a turnover by Edmundson and O'Reilly answering 1:17 later with a nifty move to get around Jones and tuck a rebound into the open net. 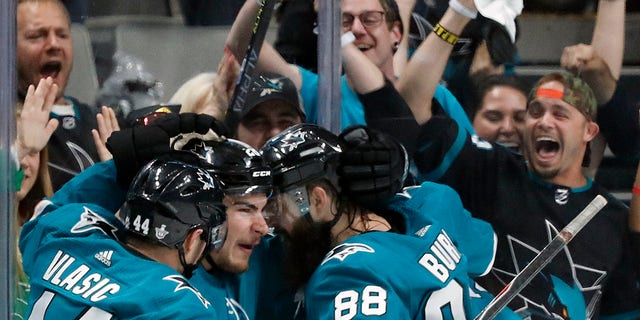 Meier then took over with his two goals in the second half of the period that gave the Sharks breathing room. His first came after Couture poke-checked Colton Parayko coming out of the zone. Meier got the puck, deked past Jay Bouwmeester and then used his quick hands to get a backhand past Binnington.

"He's got some good speed. He makes some good little plays out there," Pavelski said. "Tonight it was on display for sure. When he picks it up in the neutral zone and he has the speed going, that one goal was really nice. He can definitely push the D back and generate some chances."

Meier then got his first two-goal game in the postseason late in the period when he banked a pass from behind the goal line off Vince Dunn's skate and into the net to make it 5-2.

Bozak scored with 6:59 left in the third for the Blues but they couldn't get any closer despite pulling Binnington with more than four minutes remaining. Couture then sealed it with an empty-netter.

"We got caught in some turnovers and they capitalized on them," Blues coach Craig Berube said. "We are too spread out, during playoff time, you have to have numbers around the puck. You have to have puck support everywhere. And we didn't have enough support."

Both teams expected a physical series between two teams with big players who like to get on the forecheck. That's just the way it started with the Blues delivering several hard hits in the opening period in sharp contrast to the type of series San Jose played last round against the speedy Colorado.

But the Sharks turned one hit of their own into an early goal as Meier separated Pietrangelo from the puck in the neutral zone to send Gustav Nyquist in on a two-on-one. Nyquist slid the puck to Couture, who one-timed it into the open net.

The Blues answered with Edmundson's goal but then committed two penalties in a span of 57 seconds after going more than 136 minutes without one in the playoffs. That gave San Jose a two-man advantage that Pavelski converted into a goal when he batted his own rebound out of midair into the net for his second goal in as many games after missing six contests following a bloody concussion.

NOTES: Couture also had 10 goals in the playoffs in 2016, joining Evgeni Malkin, Alex Ovechkin, Patrick Kane, Nikita Kucherov and Jake Guentzel as the only active players with at least two seasons of 10 or more postseason goals. … Blues D Carl Gunnarsson (lower-body injury) was scratched and Robert Bortuzzo played in his place.

Jade Jones taking no risks with Covid ahead of Tokyo Olympics

Billy Joe Saunders vs Martin Murray: Back BJS to win at 20/1 with William Hill offer