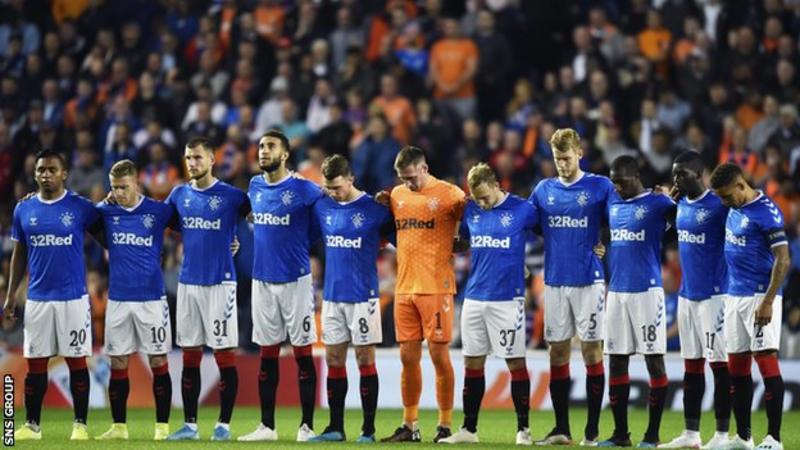 Rangers gave the family of former captain Fernando Ricksen “a performance to be proud of” by beating Feyenoord in the Europa League, says Steven Gerrard.

Sheyi Ojo netted the only goal just a day after Ricksen lost his battle with motor neurone disease.

“It’s been an emotional 24 hours for everyone connected with the club,” said the Rangers manager.

“Everyone was looking for a performance for Fernando’s young family to be proud of.”

Ojo’s stunning strike in the first half gave Rangers what could prove to be a vital win in Group G with a trip to face Young Boys of Switzerland, who lost 2-1 to FC Porto, next.

The Ibrox side’s intensity in pressing caused Feyenoord problems as they struggled to build from the back, consistently giving away possession.

Rangers passed up numerous chances, including a missed penalty by captain James Tavernier at 0-0.

“I thought my players were outstanding, especially the first half,” the Rangers manager added.

“I was slightly disappointed not to go in at the break further in front. I don’t think anyone can take the three points away from us, we deserved it, the fans were fantastic. It was very fitting.”

Feyenoord improved in the second half as Rangers struggled to keep hold of possession, while still posing a threat.

And Gerrard was thankful for another big performance from goalkeeper Allan McGregor.

“We’re going to need Allan McGregor in every game we play, playing at this level,” he said.

“That’s the reality. Allan’s going to have to be big for us. We knew that when the group was made – Feyenoord, Porto, Young Boys. That’s Champions League opposition.”