The attorney for the 22 women suing Deshaun Watson once again said the NFL quarterback has “unsent” or deleted messages on Instagram and is pursuing two of Watson’s phones in an effort to recover them.

The attorney, Tony Buzbee, made the accusation after Watson’s attorney, Rusty Hardin, said Thursday during a court appearance that Buzbee’s clients also had deleted or altered messages on social media. All of these messages are considered evidence that could help show whether the Houston Texans star engaged in sexual misconduct with these women during massage sessions.

“Once we get those phones, whether you deleted something or not, Deshaun Watson, we’re going to know everything you’ve ever written and ever said and ever sent,” Buzbee said during a court conference Thursday in Houston that was livestreamed. “And the same is true on our side.” 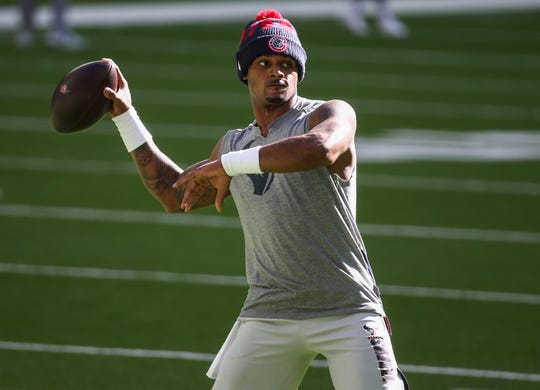 Hardin said in court Thursday he believed some of the plaintiffs “have been destroying and altering some of their previous postings.” He also said he feared it would continue to happen without an order from the court.

Buzbee replied that Hardin is “flat-out wrong” and said he sent a letter to Watson’s legal team to preserve both of Deshaun Watson’s phones “that I know he owns.”

“And I know that after I sent that letter, Deshaun Watson unsent … his Instagram messages to many of my clients.”

One of Buzbee’s clients filed a lawsuit March 28 that said Watson is “deleting Instagram messages” as a result of the lawsuits against him.

The next day, Hardin issues a statement:

“Deshaun regularly deletes past Instagram messages. That said, he has not deleted any messages since March 15th, the day before the first lawsuit was filed.”

Both sides had sent notices to the other to preserve evidence. After listening to both sides, Judge Rabeea Sultan Collier did not take further action on the matter.

“I have full confidence the lawyers understand there are severe penalties in destroying or altering evidence,” she said in Harris County, Texas. “And it sounds as if both sides have sent over preservation of evidence notices to the other side.”

She said the court will deal with evidence destruction issues if they come up.

Watson, 25, faces civil lawsuits by 22 women who have accused him of sexual misconduct during massage therapy sessions in 2020 and early 2021, including two who say he forced them to perform oral sex. Hardin issued a statement this week that says all 22 women are lying and also described it as a money grab in court documents filed Monday. Hardin previously said there were “sometimes consensual encounters” involving Watson.

The incidents allegedly took place in four different states, mostly in the Houston area. Many allege similar details in their lawsuits — They said they didn’t know Watson before he contacted them for massage services on Instagram and that Watson exposed himself and caused them to touch his genitals during the sessions.

The women did not initially contact the police and instead went to Buzbee, who filed suit on their behalf seeking compensatory damages. Both the Houston police and the NFL are investigating the matter.

Hardin also said Thursday that his legal team has not yet been able to identify four of the plaintiffs and sought Social Security and driver’s license numbers from Buzbee to be able to know who is suing Watson. Buzbee said he would work the matter out with Hardin.