Red Sox legend David Ortiz recovering from surgery after he was ambushed, shot in Santo Domingo

‘Big Papi’ David Ortiz was at the Dial Bar and Lounge when a gunman approached from behind and shot him in the back; Phil Keating reports.

Pedro Martinez became teary-eyed Monday night when asked about his longtime friend and former Boston Red Sox teammate David Ortiz, who was seriously wounded in a shooting in his home nation of the Dominican Republic over the weekend.

Martinez appeared as an analyst on the MLB Network and paid an emotional tribute to Ortiz, who was transported to Boston in serious condition late Monday.

"I don't have enough words to describe who David is, what David means to baseball," Martinez said live on air. "But I'm so disappointed to know that someone like David, who saved so many lives, can have someone after his life. And I'm sorry. I'm sorry. But it hurts me. It hurts me."

The 43-year-old Ortiz was shot at close range in the torso Sunday night at the Dial Bar and Lounge in Santo Domingo. The injuries forced doctors in the Dominican Republic to remove his gallbladder and part of his intestine before being flown to Massachusetts General Hospital.

Local police have arrested one suspect, Eddy Vladimir Feliz Garcia, and are searching for others. Authorities could not immediately confirm a motive for the shooting.

"To see someone just want to take his life away, in such a coward way, it bothers me. It bothers me deeply," Martinez added.

The former pitcher on Sunday posted on Twitter a picture of him embracing Ortiz, writing that he is “at peace” knowing his good friend is recovering.

“[You're] a strong man Compai, can’t wait to hear your voice,” Martinez wrote. “My thoughts and prayers are with you, see you soon.” 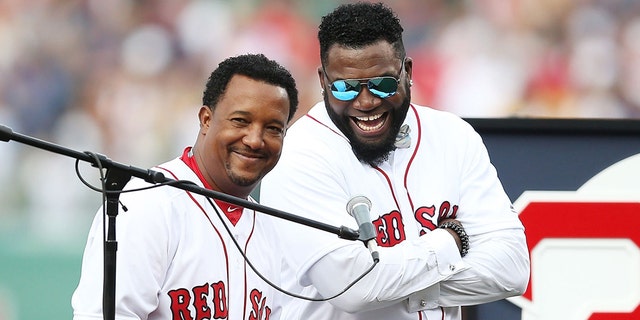 Martinez and Ortiz were teammates for two seasons in 2003 and 2004.(Getty)

Ortiz, affectionately known as “Big Papi,” went on to deliver the Red Sox two more championships in 2007 and 2013. He retired in 2016 after becoming a 10-time All-Star and hitting 541 career home runs, the 17th most in baseball history.

Martinez wiped away tears as he described his relationship with Ortiz as “like a brother” and “beyond what everybody else gets.”

"I just can't take it. I'm here sitting with you guys and I'm trying to have fun, but my heart is with David, with his family, with everybody that cares about David,” he told his colleagues on the MLB Network. “Because just one coward out there that wanted to do that to someone that didn't deserve it."